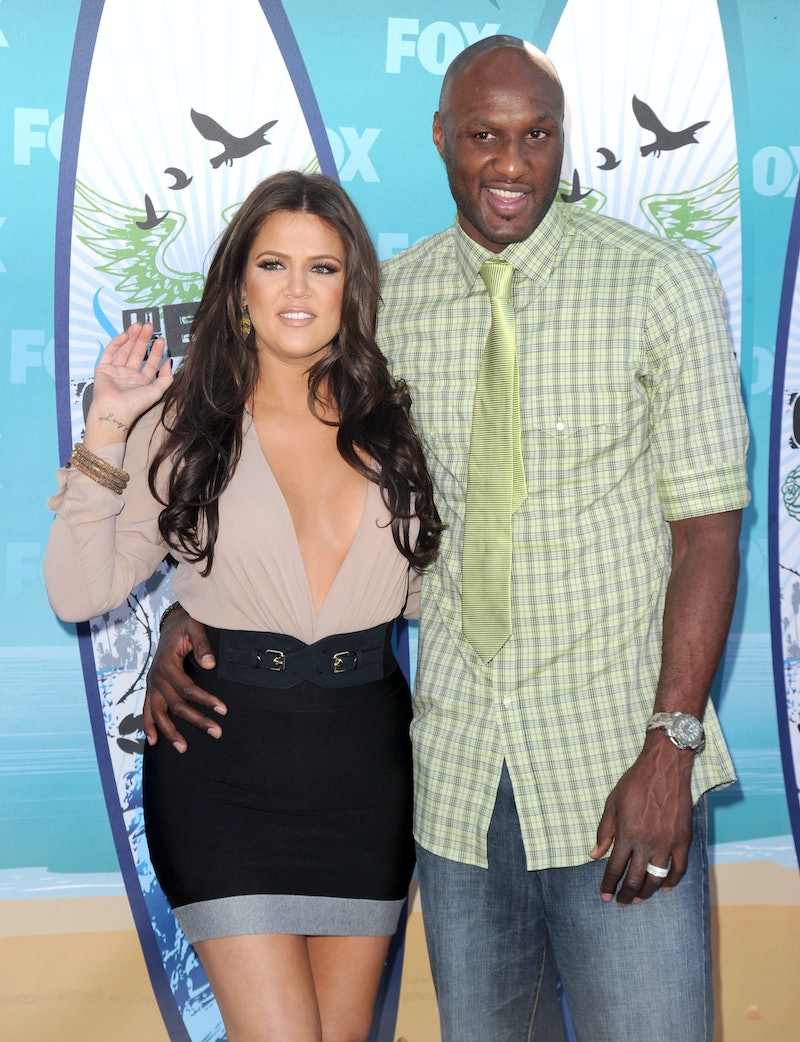 Something has to be seriously wrong when Lamar Odom is getting more press attention than his Kardashian in-laws. This week has been filled with rumors, reports, statements and other news about the former L.A. Clippers player, so many that he's even overshadowed Kim Kardashian — for now. It all started with cheating rumors a few weeks ago, as two women claimed to have had affairs with Odom, who has been married to Khloe Kardashian for almost four years. As it turned out, the worst was yet to come.

On Monday, it was reported that Odom was missing, though some sources claimed Khloe had kicked him out after a failed intervention, while others said he was never missing at all. Along with this came the revelation that Odom is addicted to crack cocaine, and even more rumors began swirling. Some say Khloe has been trying to help him, others say they're getting separated, and the New York Daily News claims that Kris Jenner had an emergency meeting with a divorce lawyer on Khloe's behalf.

That brings us to Friday, and Odom's DUI arrest. We know that he failed three sobriety tests and is being held on bail, but that's it. Now there's even speculation that he's actually addicted to OxyContin, not crack.

As everyone scrambles to find out just what is happening to the troubled star, I keep thinking back to one brief moment from Keeping Up with the Kardashians that, as strange as it seems, might say a lot about Odom, and even shed some light on his issues. Just watch, and let me explain.

As everyone else in the Kardashian family gets ready for their big Oprah interview, Odom stops, looks at the fancy blade-less fan for a second, and then sticks his hand through the middle. No one else even notices the fan, but Odom seems almost amused by it — and no, I'm not about to say that he was high.

Odom comes from a completely different world than the Kardashians. He grew up in Jamaica, Queens and doesn't come from any sort of wealth. Remember the KUWTK episode when Kim and Khloe visit his old neighborhood, complete with offensive outfits? It was pretty different from the sheltered, suburban L.A. childhood that the Kardashians experienced — let's not forget that they had money long before Kim even met Ray J.

It's not like the Kardashians introduced Odom to wealth, he was a successful basketball player for years before meeting Khloe and pro athletes are very well-compensated, but the Kardashians live a lavish lifestyle, one that they've been used to their whole lives. Odom may have increased his own fortune, but that doesn't mean he lived like them.

Even Bruce Jenner was once embarrassed to drive his wife's car for the day, because it was too flashy. Odom didn't just marry into a family, he entered a whole new lifestyle that he needed to get used to. I'm sure having cameras follow you around for months at a time isn't an easy adjustment, either.

None of this is an excuse for addiction, nor do I believe that it caused his problems, but it's worth considering where Odom might be coming from. His father has struggled with a heroin addiction, and their difficult relationship was seen on the short-lived Khloe & Lamar. In the clip below, Odom explains the issues between he and his father.

That's not the only hardship Odom has encountered, either. He had three children with his ex-girlfriend Liza Morales, and in 2006 their youngest, Jayden, died at just six months old of SIDS. In 2011, Odom returned to Queens for his cousin's funeral and while there, his driver struck a 15-year-old boy who later died of his injuries. That's a lot for one person to go through.

All of this, coupled with Odom's alleged addiction, may explain some of the aspects of his relationship with Khloe that I always found strange. For a celebrity, Khloe tends to put a lot on hold and completely alter her life based around Odom — she goes beyond the expected compromises between a married couple.

Sure, it was normal to move to Dallas when Odom was traded to the Mavericks, but if you watch KUWTK or Khloe & Lamar, you can see the way she always hovers around him, and skips family events to be wherever he is. What I thought was Khloe being "clingy" may have been her wanting to be there for him, and to an extent, keep an eye on him.

Jezebel posted a clip from KUWTK, questioning whether Odom might have been on drugs during the scene because of his strange behavior, but I find Khloe's actions much more bizarre. Her hanging on him and talking over his actions may just be her looking out for her husband, who she knows has struggled in the past.

Whatever is really going on with Odom, I hope he is able to work through it. He always seemed like a nice, kind of goofy guy, who loves his wife. I'd like to see him get better for her and his children, and for Kris Jenner to stay out of this one. Odom needs support, not E! cameras.