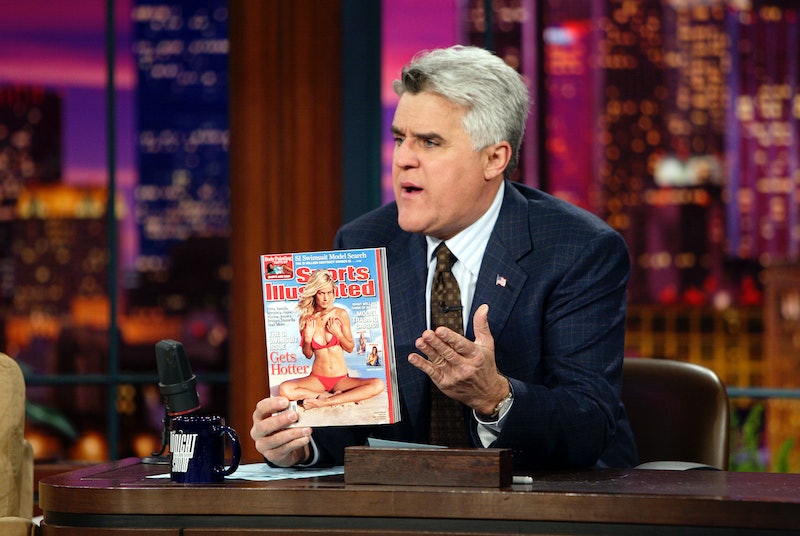 I don't know about this. This weekend, long-time talk show host Jay Leno was awarded the Mark Twain Prize for American Humor, an honor created in 1998 by the John F. Kennedy Center for the Arts and which was first bestowed upon Richard Pryor. The former Tonight Show host is the 17th recipient of the prize. I meaaaaan, sure, technically, Leno is a legend in comedy. Perhaps it's because he catered to the generation before me, but his grumpy, jaded comedic routine just doesn't appeal to me. I do like to see him dressed in a denim tuxedo showing off his collection of luxury vintage cars, but beyond that, I don't really get it. And as for this past year, I don't think Leno did much of note to merit the Mark Twain prize; and, as always, there are a handful of comedians that I think deserved the recognition, among them, of course, the late Joan Rivers.

Leno was honored by many fellow comedians that praised his hard work, his influence and his "nice guy" attitude. Jimmy Fallon, Leno's successor on The Tonight Show, joked: "Thank you, Jay Leno, for being really dedicated at collecting cars or really bad at remembering where you left your keys." Other comedians that praised Leno included Wanda Sykes and a taped message from Betty White. And that's all well and good; I guess, empirically, Leno has contributed to the comedy world in all his years hosting The Tonight Show. But there are other contenders that were passed over in favor of Leno, including the two greats that passed away this year — Joan Rivers and Jan Hooks, who were both remembered fondly by so many other celebrities.

Leno revealed in an interview with Access Hollywood last week that he continued the ban on Joan Rivers from The Tonight Show first out of reverence for Johnny Carson, and, after his death, out of pure awkwardness. Not quite respectful of such a comedic legend such as Rivers, who paved the way for so many female comedians in a tough business. Besides her brand of blunt, unapologetic humor, Rivers was also feisty and hardworking, saying once, "I was smart enough to go through any door that opened." The Mark Twain Prize has only once been awarded posthumously, to George Carlin in 2008. And of the 17 winners, only five have been women. Tina Fey took the prize in 2010, becoming the youngest recipient at only 40.

This year would have been an apt opportunity to either honor Joan Rivers' revolutions in comedy or Jan Hooks' revolution at Saturday Night Live. The late Hooks often went unrecognized for her contributions to the variety show, but she really did open the door for later female cast members on SNL to be their own tour de forces instead of background for the boys. Were the Mark Twain Prize awarded to Hooks, it'd be that long overdue recognition of her career and her time at SNL.

As for others I can name off the top of my head that I would like to see win the prize, two were present at the ceremony: Wanda Sykes and Betty White. In her spot on the stage, Sykes killed it: "I didn’t think I was going to make it. On the plane, I sneezed twice, and everybody gave me the stink-eye. This Ebola is so scary. I’m going back to being just black. I’m not African anything." This kind of aware humor alone is enough to earn her the prize, and hopefully she'll be a recipient in the future.

And there are many others; Lucille Ball shockingly never won the prize, nor has Roseanne Barr, nor Monique, all women that have broken through and succeeded in the comedy world. The Kennedy Center did one good when they honored

Sure, the award is but a symbolic prize, but even so, it's just another under appreciation of all the women who have made such formidable names for themselves in comedy. Come on: Joan Rivers was literally BANNED by Johnny Carson because she wanted to go off on her own instead of remaining a sidekick. The Kennedy Center did good in 2010 when Fey got the honor, but they could have continued on with Amy Poehler, who's not only hilarious and a genius but an advocate for young girls with her Smart Girls at the Party project. In 2012 and 2013, they honored Ellen DeGeneres and Carol Burnett, respectfully, but they're back to the status quo this year. And by awarding the Mark Twain Prize to Leno, it's just another year that female talents go unrecognized.