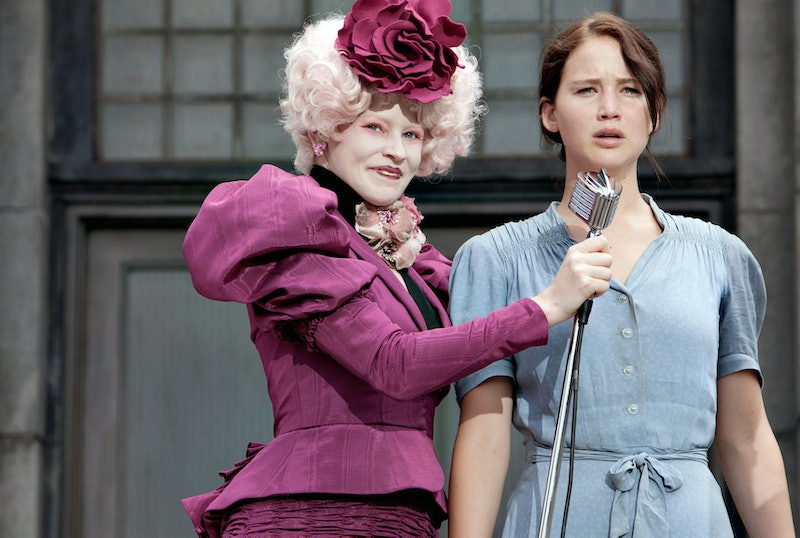 Hocus Pocus, Beetlejuice, The Addams Family, Casper — what do all of these movies have in common? Well, aside from the fact that they're all currently taking up residence on my bedroom bookshelf, they're also pivotal movies that will playing throughout ABCFamily's 13 Nights of Halloween schedule, which kicked off on Oct. 19. And while these classics are sure to make any trick-or-treater's mind run amok, amok, amok with excitement, there are a few choices in the line-up that has left me scratching my head. For example, why is The Hunger Games considered a Halloween movie? There are no witches or vampires or any supernatural creatures to speak of, so why-oh-why do I see it appearing on Monday night's spooktacular schedule?

Now, don't get me wrong, I love The Hunger Games franchise. I've seen each film in the theaters, attended midnight showings, and even dared to attempt the Katniss side braid. I'm simply saying it seems like an odd choice to air alongside a bevy of horror movies. But after taking a step back, I think I understand where the network is coming from. Though it's not your typical Halloween movie pick, there are a few justifications as to why Katniss & Co. should be included among your holiday favorites. Just hear me out…

The Plot Is Pretty Horrifying

I mean, let's face it — a movie centered around placing children into an arena so they can fight each other to the death is a pretty terrifying concept. Not to mention that we also witness several of these deaths taking place, including a 12-year-old girl. (RIP Rue) You may not be screaming out with fright, but it will definitely leave an unforgettable impression on you that will haunt your nightmares for weeks to come.

Its Love of Costumes Knows No Bounds

Though you won't see any Johnny Depp pirates or a Queen Elsa get-up, The Hunger Games is known for its lavish costumes that are just as eccentric as any Halloween-type garment. (Girl on Fire, anyone?) For those over at the Capitol, everyday is dress up day.

There Are Treats (and Tricks)

Granted this is a more extreme version given that the treats they're trying to pass out are poisonous in order to win the Games, but food is food, right? If you covered it in some chocolate I would undoubtedly eat it. (I would also clearly be one of the first tributes killed.)

There Is No Happy Ending

Between all the casualties and war-like tactics, no matter which way you slice it there isn't going to be a happy ending for anyone. Both sides will take significant loses — something that not even the wave of a magic wand could fix. Which, in a way, makes this film the scariest of them all.