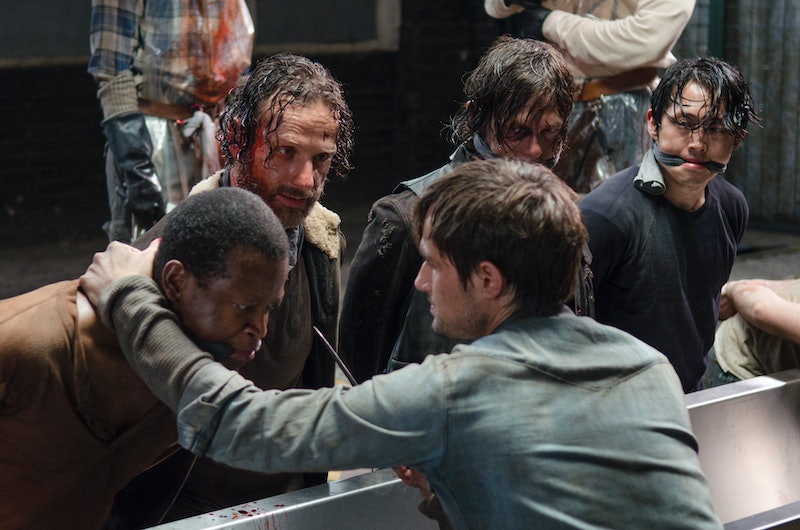 You know those times when you feel like you have a pretty good pulse on what's happening in a TV show — and then an episode comes along and you realize you have absolutely no freakin' clue what's going on? Well, thanks to the Oct. 19 episode of The Walking Dead and Bob's leg getting eaten by Gareth and the other surviving cannibals from Terminus, I can officially say I had no idea what was going to happen. Yes, I theorized that Gareth would be back and that the people of Terminus may be cannibals. And with the multiple close calls Bob had in "Strangers" and his success in wooing Sasha, I wasn't even surprised that bad things came his way. But I didn't expect Bob to get eaten in the second episode of Season 5! Now that we know for sure that Terminus was full of cannibals (just like their bellies are full of Bob's leg — too soon?), I'm left wondering, could Bob actually survive?

I realize it's not a ringing endorsement for myself as a TV blogger to say I have no idea. But, with all of the twists and fast-paced action that Season 5 of The Walking Dead is giving us, I honestly don't know. Now, the Terminus people have been compared to the Hunters from the comics, and Gareth even called themselves "hunters" during their disgusting feast. Well, in the comics (spoilers to follow), Dale was the one to be eaten by the Hunters. And unbeknownst to the cannibals, he had just been infected from a walker bite, thus, he infected all of them. What sweet, post-apocalyptic justice.

Bob was outside of the church by himself — crying. Could he have been outside crying because he was bitten? Wouldn't he have told Sasha? Maybe he was outside preparing himself for the worst. But we've seen people turn pretty quickly lately, so I doubt he'd have that much time to ponder how he was going to inform the group that he was infected.

As for what the actors think, Andrew J. West (Gareth) said to The Hollywood Reporter , "I wouldn't recommend people speculate too heavily on if the show is following the comic ... There will be more surprises to come."

What surprises, you crazy cannibal?! Tell me! And as for Bob surviving? "I wouldn't want to say it's hopeless for Bob; that would be misleading," he said in the same interview.

From the Episode 3 sneak peek, we know Sasha knows Bob is missing. And she looks determined. Could she find Bob before he dies? But how long could Bob really last without a leg? West pointed out in The Hollywood Reporter interview that Hershel lasted a long time, but the gang does not have the security they had while in the prison, so I can't imagine him surviving for as long as Hershel did.

But something that does give me some hope for Bob's fate is that his leg appeared to be bandaged. Why would Gareth and crew bandage his leg? Perhaps they are saving him for something. Or want to keep him healthy so they can keep feasting on his flesh (ughh).

I think we may see Bob stick around for a bit, but I don't think he'll survive this season. But I can't wait to watch Sunday nights to be proven completely wrong again.

More like this
Who Could Die In The Stranger Things Season 4 Finale?
By Kadin Burnett
The Future Of 'All Creatures Great & Small' Is Confirmed & Wedding Bells Are Ringing
By Rebecca Fearn and Frances Stewart
Everything You Need To Remember Before Westworld Season 4
By Brad Witter
The Umbrella Academy Cast Breaks Down That Wild Season 3 Finale
By Gretchen Smail
Get Even More From Bustle — Sign Up For The Newsletter