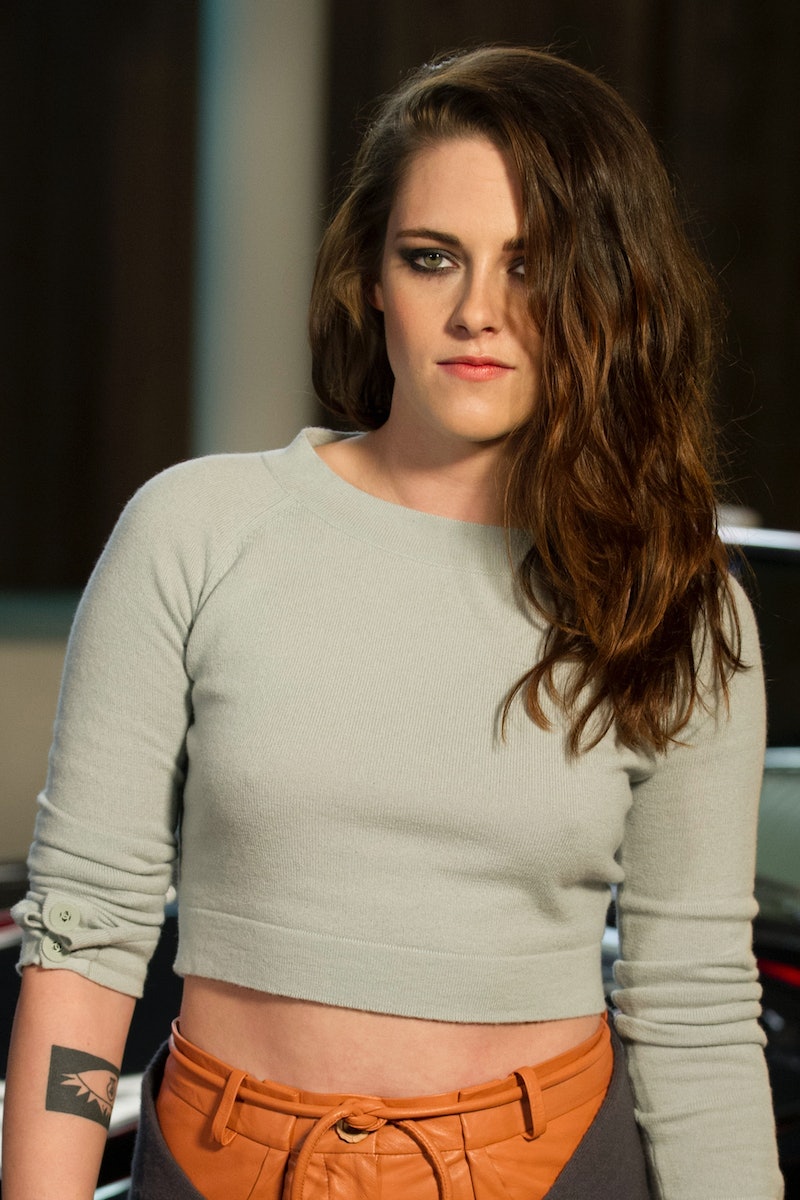 I will admit that I once considered myself a Kristen Stewart hater. She seemed very unpleasant outside of her role as Bella Swan from Twilight , a role that I didn't enjoy watching her in to begin with. I had loved her in the Lifetime adaptation of the book Speak, but throughout her Twilight career Stewart and I were just not BFFs. Now I'm experiencing a complete 180 on Stewart, not just because I realize my former judgments of her were unfair but also because FEMINISM. If you, like me, have trouble separating Stewart from some of her roles, then get ready to get to know her in completely different ways. Apparently Stewart is taking another acting break in order to focus on other art forms, which opens up a world of opportunities for the rest of us.

"I'm an actor and that's my art form, and because I started that so young, I've always felt intimidated and insufficient when I think about other forms of art I want to create," said Stewart in an interview with USA Today. "I'm going to take so much time off. I'm going to buy a live-work space in downtown L.A. and I'm going to make some [stuff] with my hands... I'm making a short film. I'm making a bunch of stuff. I don't know how I'll put it out. But I'm not going to hold it so preciously close to me. I write all the time."

That sounds nothing if not ambitious. All I'm hearing from Stewart's entire, rambling explanation is that there's a good chance that we might be seeing the following projects from her in the future.

Everyone knows you can't really be considered a cool celebrity until you write a tell-all book of your memoirs. How are you going to be remembered for centuries if people can't go to the bookstore and read about that time when you were twelve and decided you wanted to grow up and be an actress? Much like Jennifer Lawrence, Stewart is the socially awkward person in all of us and it might be easier for her to get her thoughts and feelings across in the written word.

Or she could go in a completely different direction and join the ranks of celebrities who have written fiction books for children and teenagers. Between Kendall and Kylie Jenner's YA dystopian novel and Chris Colfer's series of children's books, she would be in good company expressing herself creatively in the form of something that might get a movie option. Although it's my personal suggestion that Stewart sticks to YA or above; she has a notorious potty mouth.

I don't know about you, but I'm intensely curious as to what kind of paintings or sculptures Stewart would produce. I don't need an experimental art piece like Shia LaBeouf's work. I just want her to lock herself up in her studio and just start flinging paint on some giant canvas and see if she can make something timeless that way. Or make her own wax figure that's hopefully not as creepily realistic as Benedict Cumberbatch's wax figure.

Stewart is already helping to judge the series of Twilight short films that Stephenie Meyer is hosting a contest for filmmakers to produce. What about making short films of her own? She was a well-respected indie actress prior to starring in the blockbuster Twilight movies, so this would be just like getting back to her roots. Plus, she could make the jump from acting to directing like Chris Evans and convince the world she's quitting on-camera work for good. I'm pretty sure Evans is still laughing at us for that one.