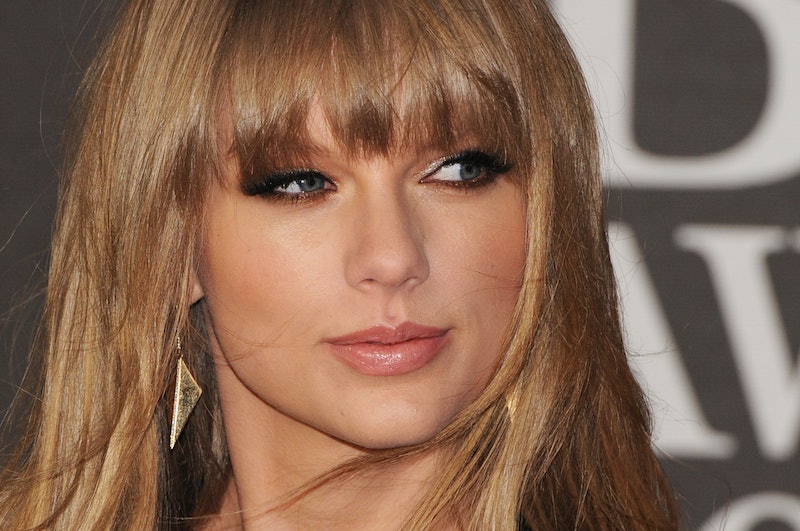 "I go on too many dates, but I can't make 'em stay/At least that's what people say," Taylor Swift proudly sings on the opening verse to her number-one hit single, "Shake It Off." The first time I heard this line, I chuckled, impressed by Swift's ability to not take herself so seriously. However, some recently revealed lyrics from the 24-year-old singer's new album, 1989 (out on Oct. 27) have left me wondering if Swift's self-aware attitude is more of a coping mechanism than anything else — a front that, whether she realizes it or not, could end up creating a bit of a disconnect between herself and fans.

In his review of 1989, New York Times writer Jon Caramanica shares some lyrics from "Blank Space," a song he describes as a "metanarrative about Ms. Swift's reputation as a dating disaster":

Saw you there and I thought

Oh my God, look at that face

Love's a game, want to plaaaaaay?

Based on these few lines, "Blank Space" certainly seems like it picks up right where "Shake It Off" left off. Though poking fun at the media's depiction of her as a "serial dater" may be one way for Swift to feel like she's reclaiming some power in the situation, almost asserting that she's not at all bothered by what people have to say about her or her love life, her September interview with Rolling Stone suggests otherwise. Swift told Rolling Stone's Josh Eells that she hasn't gone on a date in over a year and a half because her dating habits have become "a national pastime," and that she's "just not comfortable providing that kind of entertainment anymore."

So, while Swift's self-aware lyrics are definitely endearing (to a point) is it possible that they're really just a way for her to cover up how she truly feels? A way for her to thumb her nose at the press and say, "Ha ha, you can't hurt me!" even though she's actually hurting quite a bit inside? Swift has never shied away from opening up about her feelings in the past — it's part of what makes her such a unique songwriter. It's part of the reason why she's become a global superstar — people are able to connect with her music on such a deep level. I hope that the media's constant scrutiny of her personal life hasn't given her cold feet. Swift's transition to pop music has been jarring enough for some fans — I doubt that they want to feel as though she's putting up a wall between them now, too.

I, for one, think that it would be endlessly fascinating to hear Swift sing a song about what it's been like to have her dating life turned into a "national pastime." That sounds so much more interesting than a song filled with a bunch of self-deprecating jokes that mask her real emotions. A little of that is fine — but a little of that also goes a long way. I must admit, it worries me a bit that Caramanica says in his review that 1989 is "less diaristic" than Swift's previous albums, but perhaps she just isn't ready to open up about certain aspects of her life yet. Who am I to judge? It's unreasonable for me to expect Swift to share everything with her listeners. That being said, there could also be a lot more to "Blank Space" than meets the eye. We'll just have to wait until we can hear the song for ourselves.