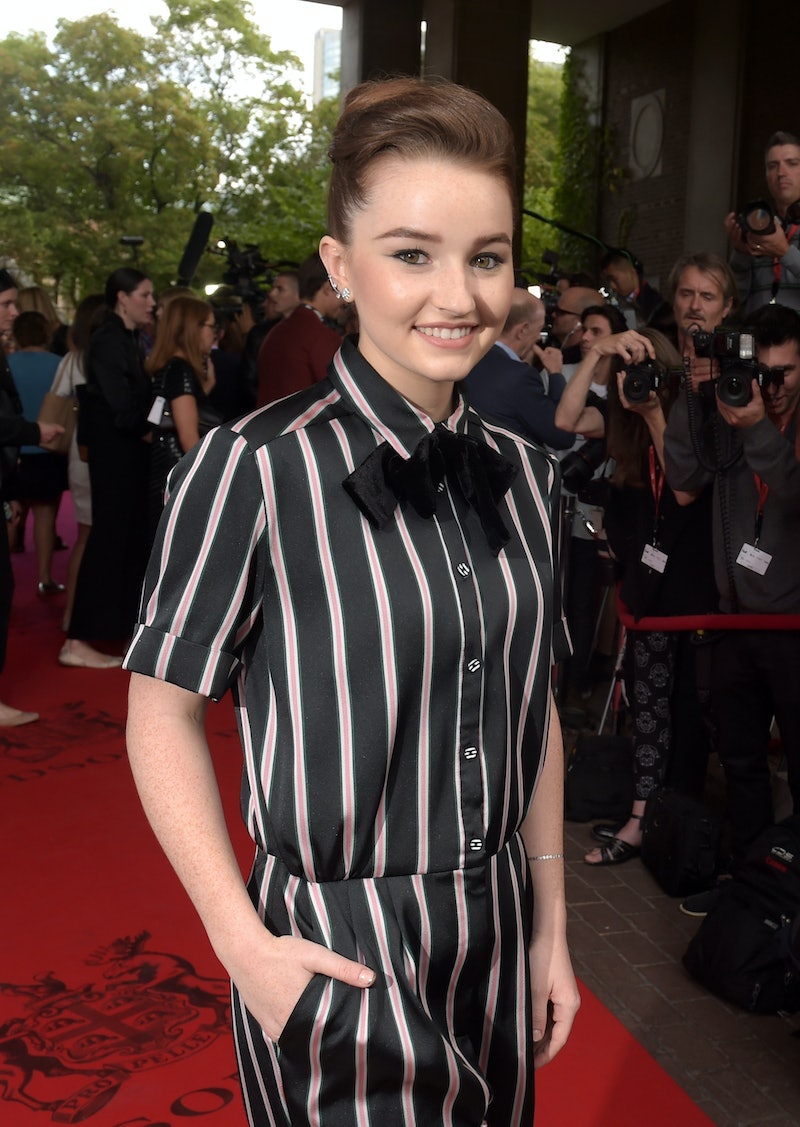 We all need to talk about Kaitlyn Dever — but if you were in the crowd at the Sundance screening of her new film with Keira Knightley and Chloë Grace Moretz, Laggies , you're probably already talking about her. Because a single line of dialogue gave Dever the biggest laugh of the entire film. Yes, I'm talking about her "I'm my own animal" bit, which, the 17-year-old actress says sparked a hashtag on Twitter almost immediately. "With that character I just kind of went for it," Dever, who plays Misty, a friend of Moretz's character, tells Bustle. But, the Men, Women, & Children star is also "going for it" IRL — Kaitlyn Dever is in the running to be the next big thing.

"Preparing for ‘I’m my own animal’ I knew that was just the funniest line and when I read it I died laughing," Dever said. But her favorite part about playing Misty, BFF to Moretz's Anika, wasn't just her hilarious line that stole the show — it was all of the women she got to work with. The cast and crew of Laggies, a film centered around Megan (Knightley), a 28-year-old millenial who's "lagging" behind with the help of her enabling parents and high school sweetheart, and her late coming-of-age, was full of inspiring women that excited Dever to work with.

"At first it was like, ‘Oh, Lynn Shelton, she’s a female director,’ and she had a huge following, so I was very excited to work with her," she said. "It turned out so well because the film is so well-rounded and the characters, they’re so evenly toned and they all flowed together so nicely," she said. "Everyone was funny and they were all great, great actresses." Dever especially loved working with fellow 17-year-old Moretz, saying: "Working with Keira and Chloe was such a great experience; I had the best time on that shoot."

Laggies isn't the first project Dever's worked on with inspiring females, however. The young star's worked with Cameron Diaz, Diane Lane, Jennifer Garner, and Margot Martindale, who she calls her greatest inspiration and teacher. "When I did Justified, she was a really big [inspiration] for me," Dever says of Martindale. "I really learned a lot from her. And a lot of the things I learned I’ll take on with me in my career as I do different projects."

For Dever, adding a project with more inspiring female role models to her ever-growing resumé wasn't the only factor that made her love Laggies. "It was really just stepping out of my comfort zone," the actress says of playing Misty. Dever reveals that the character did have some of her dry, sarcastic sense of humor but, "she was me at like, a Level 10."

Playing Misty, aside from pushing Dever out of her comfort zone, presented the young actress with a new challenge: "It’s actually very hard to be drunk when you’ve never been drunk," she said with a laugh, recounting telling a surprised Knightley how she's never had a drink in between takes on set.

The actress, who normally avoids going on social media "just to scroll," believes that it's an important tool — especially in the case of Emma Watson's HeForShe Campaign which, Dever says, "I thought it was amazing and I think feminism is a huge thing that’s going on right now."

"I saw something in a magazine a little bit ago about how the women on SNL aren’t as funny as the men, and that was really shocking to me! I I was like, ‘No, that is not the case,’ and I was totally against it. Women are just the same as men," Dever said. So, would reacting to insulting female criticism get her on social media? Absolutely. She said: "I totally use social media in that matter, it’s really good tool to spread the word."