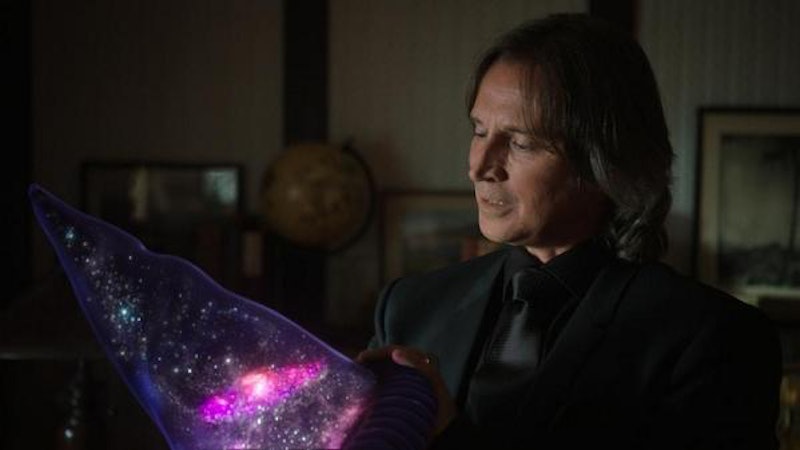 There's no doubt in my mind that the Sorcerer's hat on Once Upon a Time is a powerful magical object. That much became quite clear ever since Rumplestiltskin set his sights on it. And while we at least know exactly why the Dark One wants it (he plans to use it to unbind himself from the control of the dagger), something tells me we've only just begun realizing the hat's full magical potential. So as soon as the apprentice was sucked into the hat's whirly vortex last week, it hit me — what if Frozen Princess Anna is trapped inside the Sorcerer's hat?

Just mull over this idea for a minute or two. Because the more you think about it, the more sense it actually makes. Ever since Elsa began searching for her sister, we've all been asking ourselves one simple question: where-oh-where could Anna actually be? Many have surmised that she's probably in Storybrooke, right under our very nose.

And if she really is inside the hat, then that would technically still be true — just without the lame excuse that simply no one's ever noticed her around town… much like the Snow Queen's never-heard-of-before ice cream shop. (I'm still not buying the fact that no one in town ever wanted ice cream until this very season. They are the true villains of this story.)

The hat has already proven that it's very capable of storing people inside of it. In fact, the apprentice seemed to become an additional star in the hat's constellation when he got sucked inside, which could indicate that every star in there is actually a person — maybe even those with strong magical powers. It would certainly help to explain what exactly makes the hat possess such strong magical properties, if it consumes all the abilities of the people it traps inside.

But how did Anna supposedly get herself sucked inside the hat in the first place? Unfortunately, all we have is a lot of creative guesswork for the time being. However, if I were to throw my own hat into the ring, so to speak, I'd say it has something to do with Rumple and the Snow Queen's connection to each other. I mean, it would take a lot of magic to place Elsa in an urn and Anna in that particular hat — perhaps even the equivalent of two powerful beings. After all, both of them had clear motives.

Rumple wanted to get his hands on the hat (which, from what we last saw was still in Anna's possession). Not to mention that Rumple most likely wanted revenge for when Anna outwitted him at the apprentice's cottage and controlled him with the dagger. She commanded him never to harm her or Elsa, but she never said anything about being held captive. (These Dark Ones are trickier than genies, aren't they?)

Meanwhile, the Snow Queen seemed hellbent (frost-bent?) on keeping Elsa away from those who were not like them, assuring her "niece" that they could not be trusted. Perhaps Elsa refused to listen, so the Snow Queen became jealous and trapped Anna, in an attempt to keep Elsa away from her.

Now, of course, this doesn't explain how Rumple somehow misplaced the hat and eventually ended up with the urn in his possession. But I'm sure that could easily be explained. Maybe in order to complete both entrapments, they were obligated to hide the objects they coveted from each other. Magic is always full of stipulations (and usually comes with a price!). It could also explain how the box holding the hat seemed to pop up in Storybrooke around the same time the Snow Queen did. Coincidence? Not on this show. She may have had it all along.

Then there's Sunday night's teaser clip to consider, which shows a ghost-like Anna appear to Elsa, begging her for help. What if Anna and the others trapped inside the hat were able to project her image to the outside world as part of some magical SOS? Anything is possible, right?

But whether I'm right or completely wrong with this prediction, it's still an interesting concept to think about. I'm just looking forward to seeing what the OUAT writers pull out of their own hats.