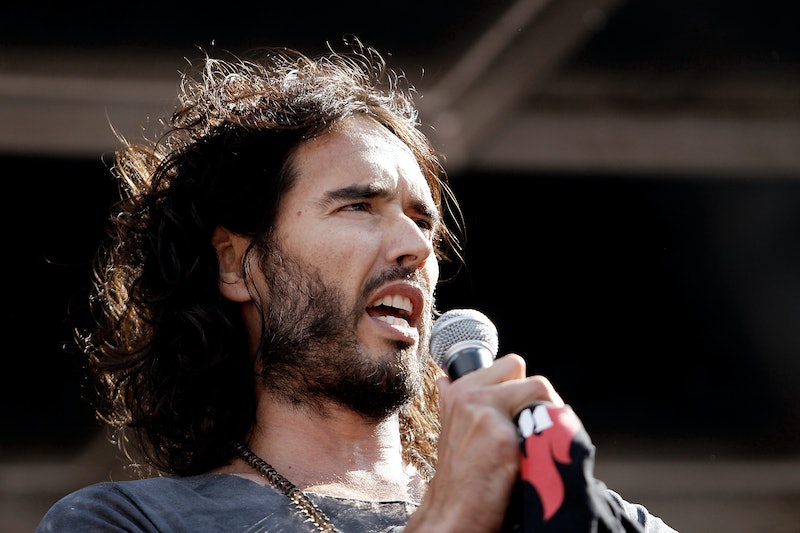 Russell Brand was moving along with such a respectable trajectory, but he hit a wall when appeared on Newsnight with Evan Davis to promote his new book Revolution on Thursday night. The comedian turned political activist has actually been surprisingly impressive as a voice against the powers that be, but on Newsnight he expressed a particularly unsavory opinion. Russell Brand admitted he has an open mind about 9/11 conspiracy theories. Ooooooooooooh noooooooo.

The Forgetting Sarah Marshall star has switched gears and become an intensely outspoken political activist, a cause that has come to a head in Revolution, his book that seeks to, well, incite a revolution. It's a colloquial manifesto that actually expresses some valid points. He's wary of the "system," writing "'When people say, 'The system works,' they mean 'The system works for me.'" I do not disagree. In his heated conversation with Evan Davis, however, Brand's admittance that he believes 9/11 could have been an act orchestrated by the U.S. government is, to me, outrageous. Brand said, "We have to remain open-minded to kind of possibility." Au contraire, we really do not.

The interview appearance was true to Brand's talk show behavior, and I do appreciate that he does not cow to interviewers or remain placid. He made a point to call Davis out as part of the system, and for someone who works for the BBC, that's probably not altogether untrue. Brand largely focused on his distrust of corporations, saying he is "simply trying to suggest there might be an alternative to corporate hegemony. That's what ordinary people care about."

OK, so he's posturing himself as a man of the people — which is fine. He is, as he told Davis, self-educated. But I don't think that a distrust of government as an oppressive system exactly jives with the possibility that 9/11 was an inside job. Truthers are difficult to understand, but their constant dissection of the events surrounding 9/11 are disrespectful to the victims and to the soldiers that gave (and continue to give) their lives in the subsequent wars that have followed the most devastating terrorist attack on U.S. soil. Regardless of whether you support the wars (I certainly do not), it does not follow to reduce the lives of the victims and the soldiers to puppets and sacrifices of the government.

Like I said, Brand has actually spoken out respectably about a number of issues. He discussed the societal image issues that caused the public to freak the hell out about Renee Zellweger's face. He also stood up to the not at all "Fair and Balanced" FOX news on their blatant, slanted journalism. I suppose anyone who is so controversial will eventually cross the line with their radicalism, but Brand has gone from questioning the system to being outrageous and groundless in his claims. I have until this point believed his activism to be genuine, but this kind of statement really does feel like it's intentionally stirring the pot.