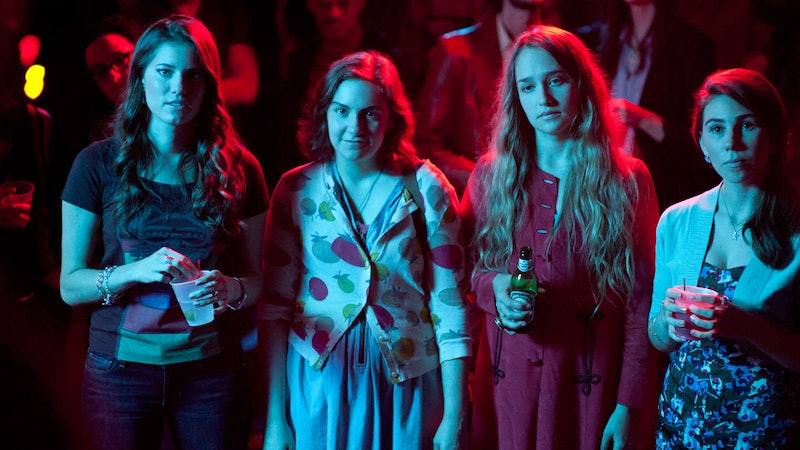 I've been good at a few things in my life — pinball, getting to the bus stop exactly as the bus is leaving — but being a single person has never been one of them. Being single is a wonderful, exciting life stage where you have the opportunity to learn a lot about yourself and experience incredible freedom; but I sadly blew the entirety of my single years learning that I felt panicked about being alone, instead experiencing the incredible freedom of throwing myself at any dude who bumped into me in a crowded bar, and daydreaming about life as a coupled lady. So I was shocked to find when, recently, I started wondering if single life is actually better than being in a relationship.

Don't get me wrong, I love my life, and I love my boyfriend; but now, in my fourth consecutive year of wading through my single friends' weekend party pictures on Instagram after I have somehow managed to devote yet another weekend to hanging shelves in our apartment, I start to wonder about whether that grass is indeed greener.

These are my five current biggest fantasies of living single, which I then fact-checked against my diaries and least gin-soaked memories from my actual single years. Is one life phase really any better than any other? Here's the fantasy we coupled people have of being single — versus the reality. (Or at least, my reality.)

You Get to Experience The Thrill of the Chase

Fantasy: You know that moment, on a first or second date, where your date accidentally-on-purpose touches you arm and it is just ON? But also you are not positive what things being "on" might mean to them? And that actually makes it more exciting?

Is It True?: Sort of. Romanticizing the thrill of the chase does require blocking out all the disappointing parts of dating —chases that don't turn out all that thrilling, or people you think you really connected with who never text you again. But it is 100 percent true that once you're coupled up, you don't ever get to experience that specific thrill again— and if you were a romantic adrenaline junkie during your dating years, that can be a challenge.

No One Forces You To Take Care of Yourself

Fantasy: Feel like eating two burritos in one day? Feel like skipping the gym for six months because you "have a headache"? Feel like doing shots with the bartender on a Tuesday night, dancing around your apartment to Danzig at 1 a.m. while wearing a neon blue cowboy hat you bought at a street fair, and then calling out sick from work? No one's gonna stop you, baby.

Is It True?: Not Really. Making "double burrito days" a part of your life isn't one of the pluses of being single so much as it was one of the minuses of the epic self-loathing I felt in my mid-twenties. Having someone chide you for having eaten nothing but cake for an entire day sounds annoying in theory, but is actually totally healthy in execution. Though every loving relationship should make room for the occasional late-night metal dance party.

You Get to Enjoy The Self-Esteem Boost of Flirting

Fantasy: Everywhere you go as a single person, there's the opportunity not just to meet new people, but to engage in harmless and ego-boosting flirting. You know, the kind of stuff that definitely won't lead to anything, but still makes you feel like a dick when you do it while in a relationship.

Is it True?: Not Really. Sure, some flirtations do leave you feeling like a foxy lady — but when you're in a couple, it's easy to forget how easy it is for a flirtation to make a wrong turn, and take your ego boost with it.

I was once working at a bar that had a skee-ball machine when a fairly dashing dude with a gold tooth (think Johnny Depp in Pirates of the Carribbean, not Madonna during her grill years) asked me to play skee-ball with him. He was insistent, and in a minute, we were trash-talking each other's games at the skee-ball machine and having a good time. I was feeling pretty great about myself ... until he disappeared, and then reappeared a moment later at the skee-ball machine — which I was still stationed at, because I was still working — with another woman who looked a lot like me, only thinner. So while the rose-colored glasses of nostalgia can lead you astray, flirting is just as likely to shoot down your self esteem as burnish it.

YOUR TIME IS YOUR OWN

Fantasy: When you're single, you're the mistress of your own destiny — and whether that means staying out all night dancing, going to bed at ten o'clock, or eating popcorn for dinner while you watch that movie about the evil haunted doll, no one else weighs in on the ways you spend your time. You are not required to text anyone to say when you're going to be home, and you never have to do that thing where you leave a party earlier than you wanted to.

Is It True?: Yup, pretty much. You do need to check in with your partner when you're in a relationship. There seems to be no way to get around this — even if you have some agreement, like "We do our own dinner things on Do Our Own Dinner Thing Wednesdays"— and so it remains one of the hugest advantages that single life has over coupled life.

You Can Have Hot Sex With Hot, New People

Fantasy: The headline pretty much says it all. I wasn't always thrilled with process of dating when I was single, but I always enjoyed the prospect of hooking up with a new beau. When I remember it now, it’s all the excitement of first kisses, the giddiness of feeling desired, and the occasional surprise of being exposed to something completely new sexually.

Is It True?: ...Define hot. Much like the above-mentioned flirting, we (and by we, I mean "I") sometimes give sex with new partners the soft-focus treatment when we remember it. Sometimes, it was definitely new and exciting; and other times, it was weird and uncomfortable, even with guys whom I eventually grew to very much like having sex with. When you're having sex with your partner for the 1,000th time, it can be tempting to only remember the time you were ravished by a mountain climber with abs you could grate cheese on, and not the time a tortoise bit you while you were giving a blowjob.

More like this
The Best Time To Date After A Breakup, According To Experts
By Bustle Editors
Are Virgo & Capricorn Compatible In A Relationship?
By Kristine Fellizar
Virgo & Sagittarius Zodiac Compatibility, According To Astrologers
By Kristine Fellizar
Hinge's New NFAQ Feature Is Demystifying Queer Dating
By Emma Carey
Get Even More From Bustle — Sign Up For The Newsletter