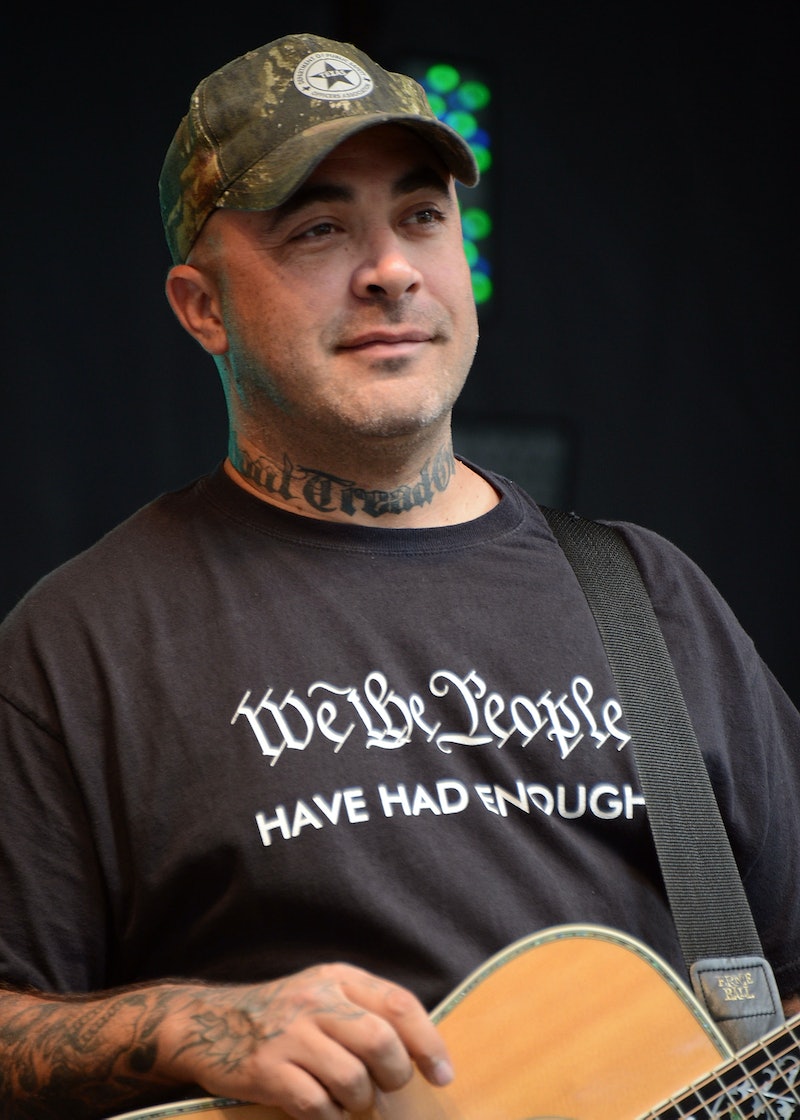 A long, long time ago, when rap-rock and mainstream metal were a thing, there was a band, an inexplicably popular band, called Staind. They had a hit called “It’s Been a While” and it made everyone who watched TRL feel really, really bummed out. The song was released in 2001, but nevertheless the lead singer of said gloomy band, Aaron Lewis, sang the national anthem at Game 5 of the World Series between the Kansas City Royals and San Francisco Giants. So in case you were wondering, even the MLB doesn’t really care about the series this year. The guy from Staind? Really? You might think that Lewis’ obscurity was the biggest offense, but nay, the poor guy also managed to botch the lyrics.

At the very beginning of the "Star-Spangled Banner" Lewis sang, “O say can you see by the dawn's early light, What so proudly we hailed were so gallantly streaming?” and skipped two whole lines. Ouch. The ramparts, man, THE RAMPARTS!

Obviously it didn’t take long before Twitter went a-flurry and condemning Lewis for being a terrible American. He took to his Facebook page and posted an apology for the flub,

All I can say is I'm sorry and ask for the Nation's forgiveness. My nerves got the best of me and I am completely torn up about what happened. America is the greatest country in the world. The Star-Spangled Banner means so much to so many, including myself. I hope everyone can understand the intensity of the situation and my true intent of this performance. I hope that the Nation, Major League Baseball and the many fans of our national pastime can forgive me.

Sure, it was an embarrassing moment, but Lewis isn’t the first singer to mess up our national anthem. Far from it, in fact. Let’s take a look at his fellow Star-Spangled slips. But first, his performance:

The Super Bowl is the most-watched televised event year after year. So in 2011 when Christina Aguilera sang the national anthem and inserted her own lyrics of the "twilight's last reaming," it was met with a universal, "ouch."

2011 was a rough year for the "Star-Spangled Banner" as American Idol star Scotty McCreery also had trouble at Game One of the World Series between the St. Louis Cardinals and Texas Rangers.

The elevator crooner had to check his hand for lyrics while performing at Game Four of the MLB American League Championship in 2003. HIS HAND! Cripes.

Lauper sang the national anthem for the 2011 U.S. Open. To add insult to injury, it was a special memorial performance for 9/11. That. Is. Rough.

There's a difference between comedic satire and distasteful "joking." Barr's intentional mangling of our nation's anthem at a baseball game between the Reds and the Padres induced plenty of patriotic rage. She finished the performance by spitting and grabbing her crotch. It's a surprise she wasn't pulled from the microphone.

This happened in 2012 and my ears are still bleeding.

Hey, you remember Jesse McCartney, right? RIGHT? He performed the tongue-twisting song at a NASCAR race in 2009. He quickly apologized on Twitter, "Here At the Nascar race! So much fun! Can't believe I forgot the words to the Anthem! I've performed it 100 times. Bad Nerves today I guess." Aw, poor guy.

Another cheat sheet! The country singer checked notes of the lyrics on his hand while performing at the 2012 MLB All-Star Game.

BEY-GATE: 2013. The Queen of the (music) world performed the national anthem at the Presidential Inauguration in 2013. Though her performance was seemingly **flawless, it was almost TOO flawless. The controversial performance was in fact lip-synced. The pop royal made no apologies for not wanting to deliver anything less than perfect. To shut up the haters, she sang the national anthem at a Super Bowl press conference later that month. Bow down.