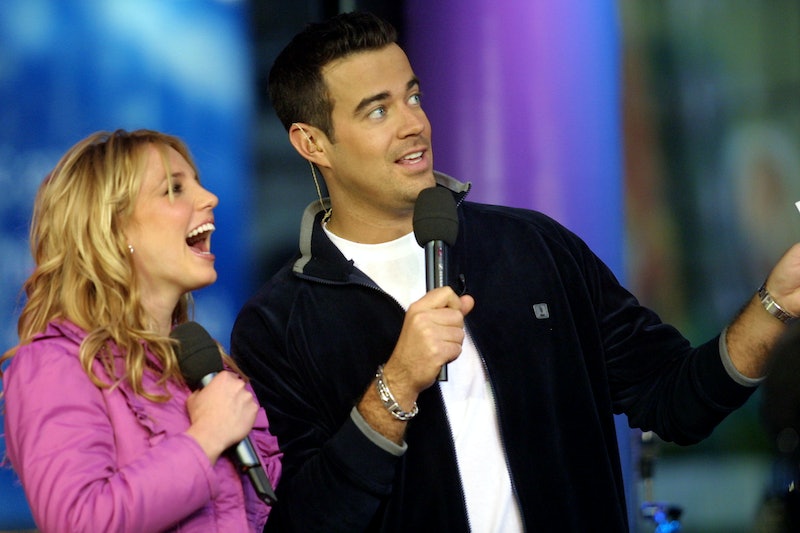 Although this news is wonderful for Carson Daly, for the rest of us it's yet another reminder that we've all gotten older and the world is not the way that we remembered it. Most of us know Carson Daly as the host of TRL. All of us had a childhood crush on him that none of us will admit to now. Since TRL made him a star, Daly has not only gone on to join NBC and The Voice, but is now also the social media correspondent for the TODAY Show. As if that's not bad enough, he's engaged to Siri Pinter with whom he has two children, Jackson and Etta. Now, Daly and Pinter welcomed a third child to the world, London Rose Daly, and, man, do I feel old.

See, I have this problem where I continue to think that 2001 was like three or four years ago maximum. Every time I remember that 2001 was actually 13 years ago, I start checking for liver spots and wrinkles. The world has changed so much since the turn of the millennium and pop culture is practically unrecognizable. As the bastion of pop culture, where Carson Daly told us what to watch and who to listen to, TRL defined a generation. Thus, it can be more than a little jarring to reflect back on the good old days and realize that there are so many discrepancies between the TRL-era and the modern day that will really make you feel your age.

So in honor Carson Daly's third (!!) child and Throwback Thursday, here are seven TRL things that will make you feel super, super old.

Remember when MTV meant Music Television and as such pretty much all they ever showed was music videos? Remember when a show counting down the top music videos, like Total Request Live, was shown in a primetime slot? Yeah, say goodbye to those days. MTV nowadays is known for teen dramas and reality TV shows and music videos can be seen online. That just makes me wonder what MTV actually stands for anymore.

2. The last episode of TRL came out six years ago

The final episode of TRL was broadcast Nov. 16, 2008. That was almost six years ago. I repeat, seasons of TRL have not been on MTV in six years. The next generation won't even know that show was a thing.

3. Half those bands aren't even together anymore

Remember Good Charlotte? 'N Sync? Backstreet Boys? Hanson? The Jonas Brothers? Of course you do. After all, you were there to see all of them eventually break up. Even Fall Out Boy, who put out a new album in 2013, broke up before getting back together. You're old enough to remember when Hanson was a thing, you fossil.

4. Josie and the Pussycats is 13 years old now

Back when Reid was riding high from her appearance as Melody in the 2001 movie Josie and the Pussycats (which is 13 years old), Carson Daly and Tara Reid were a cute couple while they lasted. Now Daly is having his third child with Siri Pinter and Reid is reportedly dating Erez Eisen from Infected Mushroom. And starring in Sharknado.

5. Ariana Grande was 15 years old when TRL was canceled

For one glorious day, TRL returned with Ariana Grande as the host. At the time, you were probably just ecstatic about her new music or about the return of TRL, but now allow me to burst your bubble by pointing out that Grande hosted TRL, which stopped being broadcast before she was even famous. TRL stopped being a thing before Ariana Grande started being a thing. It's been that long.

Ah, man. Those were simpler times, when Miley Cyrus still had brown hair and sang Disney-approved break-up songs. TRL occurred in the lifetime before the infamous incident at the VMAs that turned the Miley Cyrus of old into the Miley Cyrus that Instagrams peeing in the woods. Yeah.

7. Peyton Sawyer and John Winchester had a baby

Hilarie Burton, better known as Peyton Sawyer from One Tree Hill, was one of the TRL VJs during and after the Carson Daly era, splitting her time between that and filming for OTH. Now she's dating John Winchester from Supernatural, aka Jeffrey Dean Morgan, and had a son with him named Augustus Morgan. Bonus: Augustus is 4 years old. Do you need a walker now, Grandma?

More like this
Mollie King & Stuart Broad Have The Most Relatable Wedding Plans
By Sophie McEvoy
J.Lo Uses They/Them Pronouns To Introduce Her Child Emme For A Special Duet
By Jake Viswanath
Kate Bush Reacts To “Mad” Revival Following 'Stranger Things' Cameo
By Sam Ramsden
Sadie Sink Would Escape Vecna From 'Stranger Things' With This Taylor Swift Song
By Grace Wehniainen
Get Even More From Bustle — Sign Up For The Newsletter