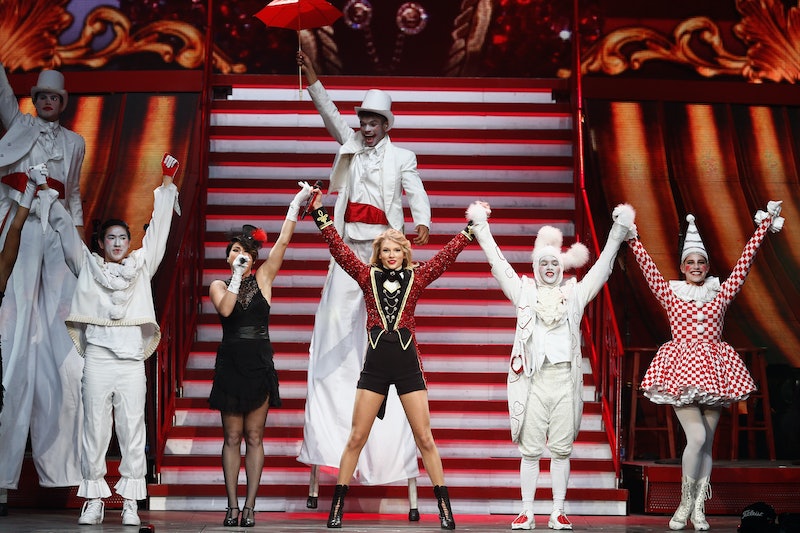 There is no denying it now. At midnight on Oct. 27, it unofficially became National Taylor Swift Day with the release of her country-turn-pop star opus, 1989. So now that we're all holed up in our offices/dorms/bedrooms listening to every track and sub-tweeting lovelorn lyrics from 1989 to our crushes, it's time to try to focus on the best holiday of the year: Halloween. The best other than National Taylor Swift Day, of course. But can you combine your love for both this year? You most definitely can, especially since Swift has been coming into her own style wise and sassy wise, creating plenty of moments that are tailor made for a unique costume. We've already got down the basics of how to put together a signature Taylor Swift Halloween costumes this year, but I wanted to make sure that you and all of your Swift fanatic friends would REALLY stand out amongst the competition. So in honor of the release of 1989, I give you four original Halloween costumes that only the true blue fans and (possibly Ms. Swift herself) will recognize on this most important of days.

After her interview with Rolling Stone, there was wild speculation that Swift's "Bad Blood" was about another reigning pop star, Katy Perry. Although we might never really know who it's about, immediately following the release of the Rolling Stone comments, Perry took to Twitter to reference one of the most famous Mean Girls in history:

So if the Regina George we think she's referencing is actually Swift, all you need is a blonde wig ($19.99, Party City) and a classic Mean Girls outfit, like a pink velour jumpsuit or a variation on her Halloween bunny costume but with sheep ears and a tail, of course. Print and hang the tweet on your outfit for full effect.

2. The couple that doesn't go out of "Style"

So, "Style" is easily one of my favorite songs from 1989. It's a prefect blend of shimmering pop with '80s synths and little funk guitar that builds up to a soaring catchy chorus. It's also safe to say that the boy with the "James Dean daydream" look in his eye and "white t-shirt" is almost 99.9 percent about Harry Styles, and I whole heartedly agree because just look at him.

To complete this look, you only really need to make sure you've got the "red lip classic thing" that he likes and a "tight little skirt" for that good girl, gone bad version of Swiftie. I would suggest "New Temptation" from MAC and pretty much any cute bandage mini skirt from Forever 21.

She only just fully moved to New York a bit ago, but Taylor Swift is already being recognized for her love of the the best city in the world. On Monday, she was announced as New York City's Global Welcome Ambassador and has been sharing how much her move to NYC has inspired 1989, including in the "secret messages" in the album booklet.

This look will need a cute eyelet white dress, like this one at Forever 21, with her red lip (again) and classic Ray Ban Wayfarers to look "very New York." You can either pose on top of the Empire State Building or walk around with an NYC map and coffee cup to complete your look.

4. If you love every song too much, just dress up like 1989 Polaroid cover art

Since 1989 just came out in full on Monday and Halloween is on Friday, I totally understand if you won't be able to pick only ONE favorite song in time (because 150 listens probably isn't enough). On her Tumblr, Swift posted that each physical copy of 1989 will come with 13 Polaroids which will have a handwritten lyric at the bottom. So if you want to embody this Polaroid look, you should head over to her official site store and buy a replica of seagull top that she wears on the album cover.

Next step, you can either use Swift's app to make your own Polaroid album cover art and blow it up, or really go DIY and simply get large cardboard to cut out the frame of the Polaroid and add the "T.S." and "1989" in Sharpie at the bottom. Voila! Now just add some of that signature red lip peeking out and you're set!