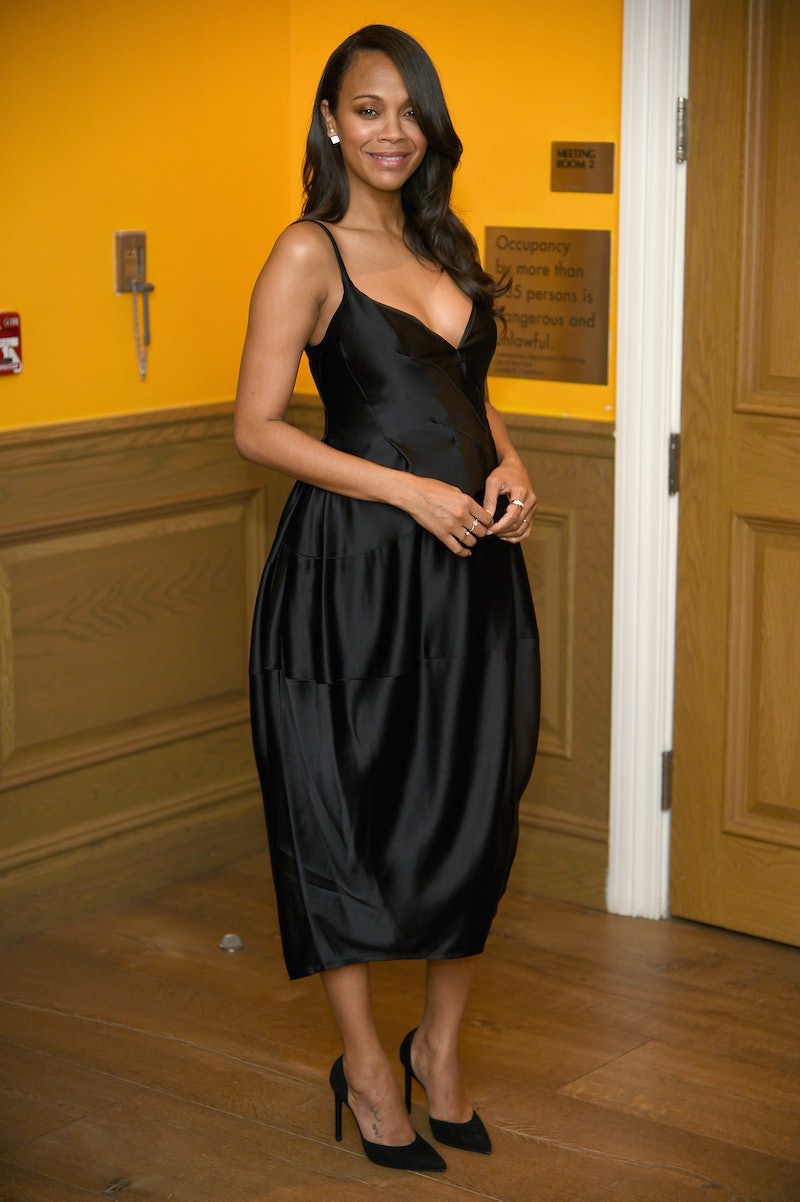 It was a joyous day when we found out there were not one, but two little babies camping out in Zoe Saldana's uterus until they would join the world with their inevitable good looks, charm, and delightful celebrity-weird baby names. The twins are thought to be due some time around the holidays and Saldana will definitely have a lot on her plate. According to her IMDB page, right now the expectant mother has one movie in post-production and four in pre-production over the next three years, including all of the planned Avatar sequels. And now, thanks to Entertainment Weekly, we have a better idea about how Saldana will handle motherhood and her movie career, and it's a luxury not many other women are lucky enough to have.

Obviously, Saldana was asked about her baby-work life balance in the interview, because that's what we've come to expect from interviews with expectant mothers. And it sounds like Saldana isn't worried about making room for both roles in her life:

I know that we will work everything out. I have to say, I’m very lucky. The great thing is that all the producers and creators involved in the projects that I’ve done — Avatar, Star Trek, and Guardians — they’re very good people ... I’ve gotten nothing but support. To know that we are getting to that place where women can have that support from male driven workforces is — I have to say, it’s very inspiring.

I'm truly happy for Saldana. It's wonderful that she surrounds herself with people who know her, understand the challenges that are coming up in her life, and are ready to make time for the baby craziness that is surely on its way. And it seems that no one would be able to make her come to work anyway:

And also, they don’t have a choice! I’m not going to rip my child off my tit to go work ... It’s nature! Like, you just cannot do it. What kind of mother would I be? There’s no choice. It’s like, "What, you want me to leave my newborn so that I can work 16 hours on your set? He’s only a month old, are you out of your mind?"

Let's be clear, the kind of mother she would be is the usual kind in America. The United States is the only country without laws providing guaranteed maternity leave — something President Obama is working toward changing. To put that little fact into perspective, basically all of Europe and most of Asia provide some form of paid parental leave to all female (and sometimes male) employees. So the kind of mother Saldana would be if she "rip[ped] her child off [her] tit" is absolutely the typical American mother. The parenting experience she's going to have while working in Hollywood is absolutely going to be a different one than the average working mother, but it's great she's putting her foot down and saying she's going to put the twins first in her life after they're born.

And to be honest, how much can the Avatar team really fight against this? She's an integral part of their movies, and an established character who (IMHO) was much more interesting than anything else that happened in the movie. If Saldana says she needs time to stay with the kids, they basically don't have a choice in the matter. I respect that she knows what she wants out of this time in her life, but hopefully she also realizes that she has it very easy in the scheme of American motherhood. And if knowing that she is in the unique situation of being able to comfortably stay at home and nurse her newborn children is important to her, I would hope that she would campaign to change in the American maternity leave system, too.