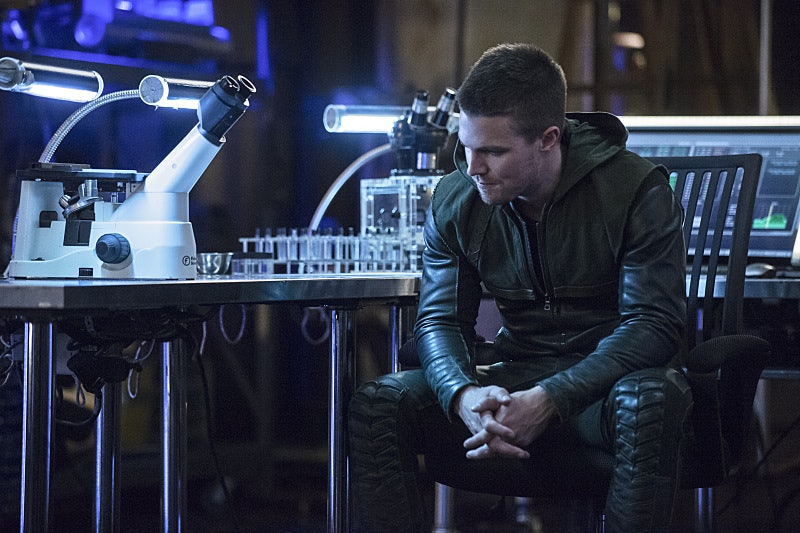 I'm not a shallow person, except that I am. I don't watch Arrow for the character development. When my roommate told me to watch the CW series, she promised me a gratuitous shirtless training montage in every episode, and a gratuitous shirtless training montage in every episode is what I got! At least, I believe so. I'm not being scientific about this and sometimes when you binge watch, the edges between episodes tend to blur. That said, I can name at least one episode that did not feature a certain superhero working out his angst on the salmon ladder — last Wednesday's Arrow Season 3 premiere! What gives? Where was my shirtless training montage, Arrow? The episode, titled "The Calm," was all about how Team Arrow was keeping the crime rate down at a steady pace. All was well in Starling City. Congratulations. However, that doesn't mean you don't need to stay in shape! Any athlete and/or vigilante will tell you that.

Never fear, I think Oliver might be hitting the home gym soon. There were a few developments in the episode that suggest all is not as calm as we think. At least I hope so, or we've just got our gifs to keep us warm this winter.

For starters, the drug Vertigo is back (as well as its Count) and it now has ridiculous boggart abilities — meaning it allows you to see your greatest fear. Riddikulus! Get it? I crack myself up. Oliver may have seen that as a self-reflective moment, but I see a whole bunch of new antagonists on the horizon. As the great song "One Week" by Barenaked Ladies says, "the vertigo is gonna grow 'cause it's so dangerous, you'll have to sign a waiver."

Was the new Count Vertigo connected to who killed Sara Lance? Also, where was Oliver during this? Was he winded due to lack of exercise? Crime is not at an all-time low when your former lover/assassin/ally/whatever gets shot off a roof in cold blood. If it was indeed Ra's al Ghul, Oliver is going to have to get back at it. After all, Ra's al Ghul trained The Batmans and gave him his skills.

Even the boardroom wasn't all that calm. Brandon Routh made his first appearance in the episode as Ray Palmer. Yes, there is now a Ray and a Roy on this show. Oy. Ray said "BTW" a lot and made a move for Queen Consolidated. "BTW," he was also fully clothed. Though I guess a shirtless business deal montage would be a lot to ask for. The future Atom also seemed to be connecting with Felicity — who isn't these days? That girl is living a dream life, save for the whole breakup thing. Was that a breakup? I'm still not sure. Olicity is too cryptic for their own good.

We also saw some flashbacks to Oliver Queen's time spent in Hong Kong. He wasn't shirtless there either. Wasteful. Again, I don't think that will last. The woman he was placed with, Tatsu Yamashiro, is also known as "Katana" in the DC Comics Universe. Something tells me he has a lot to learn from Katana.

The identity crisis proved that Ollie could not be both Ollie and The Arrow, hence the afore-mentioned weird breakup. Though, I don't know, I'm partial to the Iron Man philosophy of superhero identity. Why hide? Save the city and go on dates under the same name. Though if does have to choose, I support Oliver's choice to be The Arrow full time — a vigilante has far more reasons to climb ropes and practice parkour than a corporate executive.

Alas, the closest we got to the show's secret signature was an allusion. On their much anticipated first date, Felicity Smoak mentioned Ollie's tendency to lose his shirt, but like those of us watching at home, she didn't seem to mind.