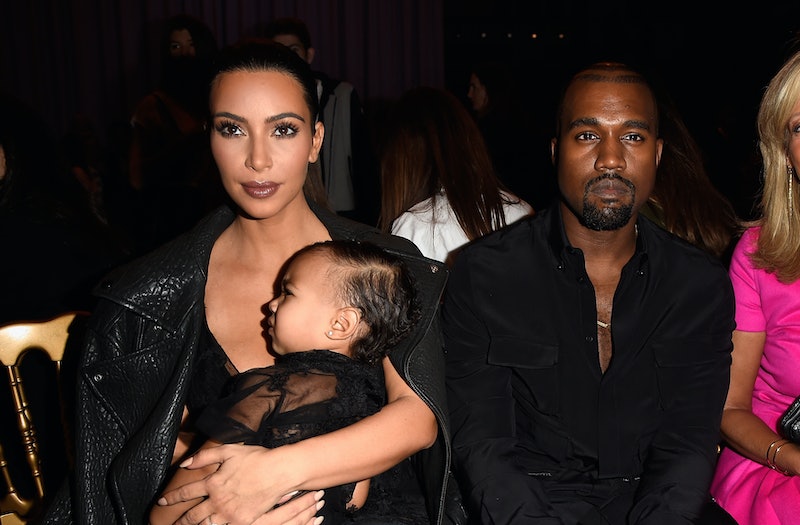 Time to meet the First Family. No, I'm not talking about the Obamas. The title of First Family of Fashion has been awarded by André Leon Talley to none other than Kim, Kanye, and North West. Cue the "what the hells?"

I have a lot of questions, such as, why has this title just been coined in 2014? What did the West's do achieve the honor? And who else was in the running? But let's get back to the current recipients. Apparently Talley wrote an article for Zappos Couture entirely about the Kardashian-Wests, in which he explains the reason behind their anointment.

"It's the new First Fashion Family: KimYe and Baby North. The three were a force of iconic moments as they pivoted around Paris, the mecca of fashion during the last fashion shows this month: the Nick and Nora Charles of our times, the Liz and Dick Burton, without the brawls."

Okay. So this isn't, like, some official award. They aren't moving into a big, white house (KimYe's Hidden Hills mansion is probably better, anyway), or getting crowns and sceptors to walk around with (Kanye would honestly do this without a title), this is just Talley's seal of approval. And I have to agree, they did wow us at fashion week.

But I have to say — I think they get this title somewhat by default.

Personally, I'd give it to the Beckhams, but since I am not the contributing editor for Vogue — all hail the Kardashian-Wests!

More like this
Kim K Is Putting Kanye’s Memorabilia — Like Grammys & Clothes — In A Vault
By Jake Viswanath
Kanye Allegedly Showed Explicit Photos & Videos Of Kim K To Yeezy Employees
By Radhika Menon
Julia Fox Says She Dated Kanye To “Distract Him” So He’d Leave Kim K Alone
By Jake Viswanath
Kim Kardashian On The Beauty Hack That “Changed My Life, My Skin, My Confidence”
By Taylor Jean Stephan
Get Even More From Bustle — Sign Up For The Newsletter