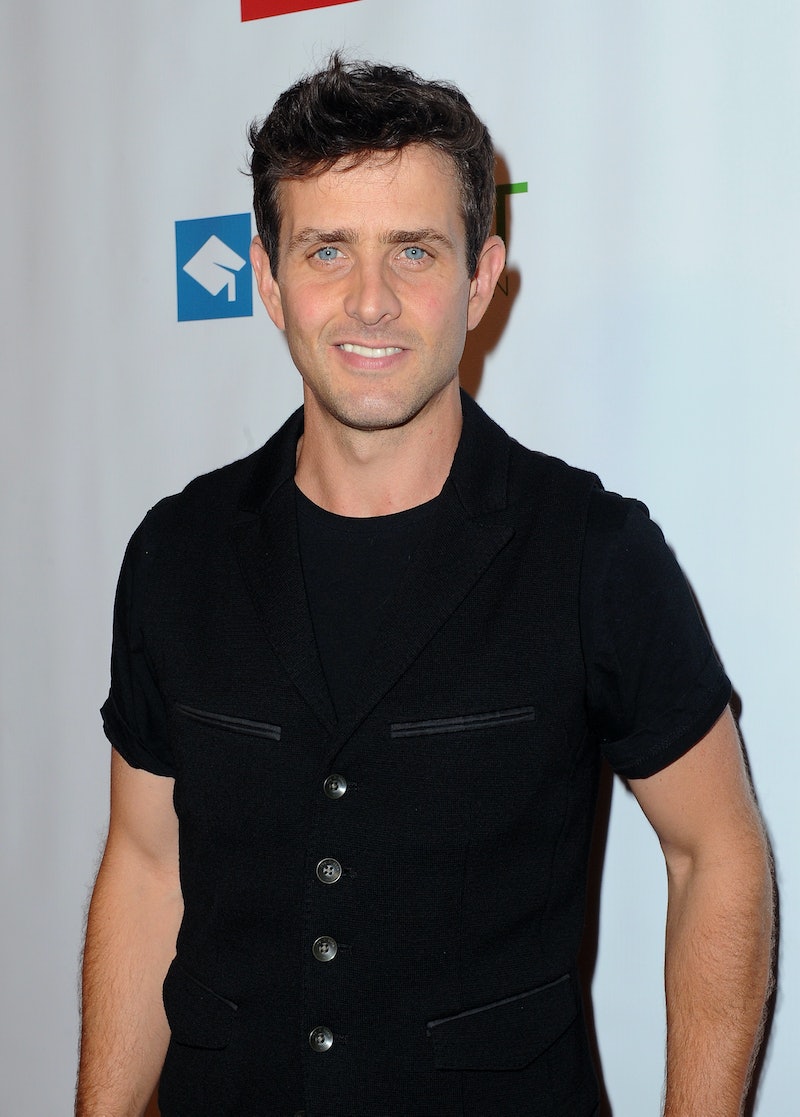 The McCarthys, a new CBS comedy similar to ABC's The Goldbergs, is inspired by the Boston family of creator Brian Gallivan — who may be a familiar face due to his "Sassy Gay Friend" series on YouTube (or a familiar voice thanks to the phrase "she's a stupid bitch"). But something that makes this standard sitcom fare enticing is the fact that Joey McIntyre is on The McCarthys as Gerard, brother to the lead character Ronny (based on Gallivan). And yes, we're talking about McIntyre from the '80s boy band New Kids on the Block. And yes, he is still looking good. Born in Needham, Mass., McIntyre himself was raised in Boston, and because of that, the role of a Boston brother shouldn't be too much of a stretch for him. Plus, he knows how to handle a Boston accent.

Besides The McCarthys, McIntyre has taken on other roles that highlight his Boston background — most recently as one of Melissa McCarthy's siblings in the 2013 movie The Heat. In real life, he has appeared with fellow New Kid Donnie Wahlberg on the reality show Wahlburgers, which follows chef Paul Wahlberg and his famous Boston brothers Donnie and Mark. And he has completed the Boston Marathon twice (and even blogged about the experience).

Beyond the Boston pride, McIntyre has been in the entertainment business since the 1980s, so what else has this not-so-New Kid done?

New Kids on the Block

Well, of course, everyone should know McIntyre is from NKOTB, but we can't ignore his musical origins. Joey was my favorite member — and one of the main reasons was because he was the youngest. (But it was still totally inappropriate for 5-year-old me to be so into him.) The band split in 1994, but the five guys reunited in 2008. Check out what a baby McIntyre was in the "Please Don't Go Girl" music video.

McIntyre really loves Boston, doesn't he? He was in 17 episodes of Boston Public as a high school teacher. The David E. Kelley-created show ended in 2004.

McIntyre proved he had legit singing and acting chops when he moved from NKOTB to performing in stage musicals. He portrayed Fiyero in Wicked , opposite Idina Menzel's Elphaba (and I was oh, so lucky to see that live back in 2004). Above is him performing "As Long As You're Mine" from the show on a NKOTB cruise (because, yes, that is a thing). Off-Broadway, he was in Tick, Tick . . . Boom! And although it was a movie, he starred in the film version of The Fantasticks, where the singers performed live (years before Les Miserables did it).

Dancing with the Stars

Season 1 of Dancing with the Stars premiered in 2005, and McIntyre was there to kick it off. He put his Broadway skills to good use and placed third with his partner Ashly DelGrosso (now Ashly Costa). After his successful run, he later joined the Dancing with the Stars tour and blogged for People magazine about it.

The Hotwives of Orlando

In the amazing Hulu spoof show The Hotwives of Orlando , McIntyre plays Heath — the personal "trainer" of Casey Wilson's Tawny. Tawny is married to an elderly, "dying" man and is having an affair with Heath. What an amazing casting choice that just further proves that McIntyre knows how to have fun.

McIntyre has recorded solo CDs and continues to work with NKOTB — their cruise for fans is even going to be the premise for a reality TV show. So if The McCarthys turns out not to be your jam when it premieres on Oct. 30 at 9:30 p.m., there are still plenty of ways to get your crush-on with Joey McIntyre.