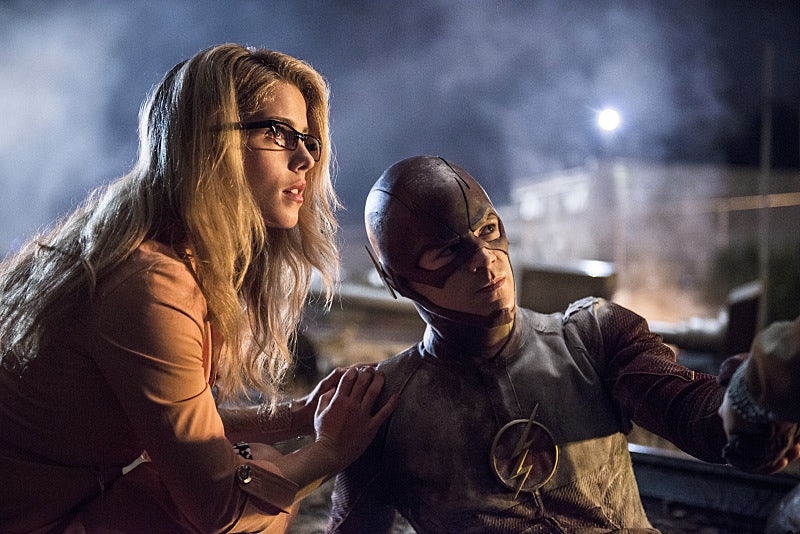 What’s better than a regular episode of The Flash? One that includes a certain blonde Arrow favorite with superb hacking skills. That’s right, folks — as the promos have clearly indicated, Felicity Smoak will appear on The Flash during Tuesday night’s episode “Going Rogue,” and I seriously could not be more excited. For one thing, I’m always been a huge supporter of crossover episodes in general, especially for shows as strongly linked as these two. But above all, I’m anxious to see Barry and Felicity reunite once more now that he’s finally awoken from his coma.

As I’m sure you can remember, these two had an amazing chemistry together right from the start — a fact that even a hardcore Olicity ‘shipper like myself can’t help but notice. However, I wouldn’t jump to the conclusion that Felicity’s visit to Central City will be romantically driven in any way, shape, or form. But before you unleash the full fury of your wrath upon me, let me just add that I'm not suggesting Barlicity don't still have underlying feelings for each other. In fact, I’m fairly certain that they do. I just don’t think it will or should be something that’s further explored at this point in time. And I can think of many attractive reasons why. For starters…

Though things with Oliver and Felicity are a little shaky these days, it hasn’t been that long since their explosive first date together, followed shortly by their albeit brief but still very swoon-worthy kiss. Something tells me she’s not quite ready to dive into another romantic entanglement so soon after this occurrence. And when she is, I’m betting it’ll be thanks to Ray Palmer’s already charismatic presence in her life. So quite frankly, Felicity just doesn’t have room in her heart for someone else… at least, not right now.

Meanwhile, Barry’s love life has some pretty promising prospects as well. Not only have we seen him secretly pining for his BFF Iris, but fans have definitely been picking up on a vibe between him and Caitlin as well. Which should prove to be slightly problematic when her not-so-dead fiancé Firestorm comes back into the picture, which you know he will. There are just too many other people in the picture to make Barlicity work. And let’s face it — when/if these two get together, we want it to be when they’re at the forefront of each other’s minds, not just a fling in-between other possible relationships. They deserve better than that.

This show might be called The Flash, but that doesn’t mean that’s the speed at which we want this potential romance to go. A nice, slow burn will make it all the more worth it in the end. Plus, there’s always the crossover episode to consider. "Flash vs. Arrow" could manage to bring Barry and Felicity even closer together (depending on the circumstances), which at the very least could help snap Oliver out of his funk and mend things with Miss Smoak before he loses her forever.

From the episode logline, Barry and Felicity are going to be pretty busy throughout her little road trip, fighting off Red Streak’s latest foe, Captain Cold (played by Prison Break’s Wentworth Miller). This doesn’t exactly allow time for a full-blown hook-up to take place, especially since she’s only sticking around for the one episode. However, according to Entertainment Weekly, there is talk of an "awkward" double date between them, Iris, and Eddie, though that's more thanks to Iris' meddling than an actual initiative on their part. But don’t worry, I’m sure there will still be a few non-forced flirty interactions to help keep the sexual tension alive. This is a CW show, after all.