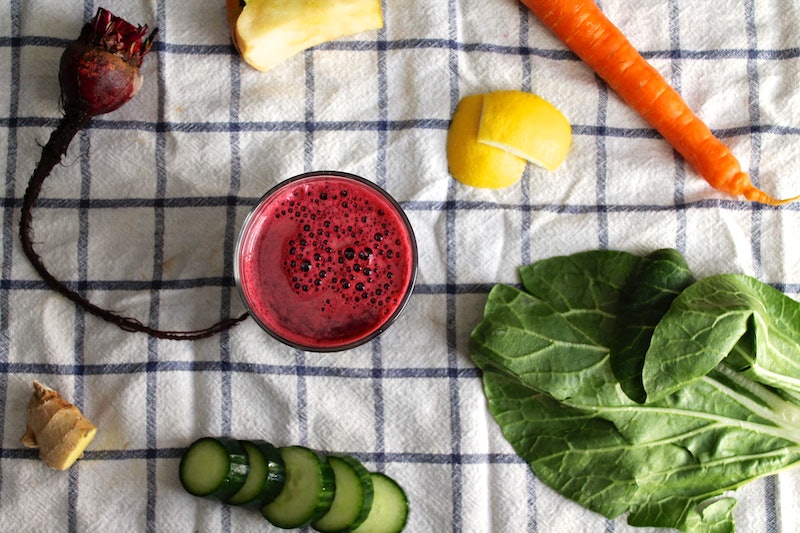 One morning in October, I woke up to find chocolate in my navel, melted. I could tell it was the stoneground kind because it still had its grainy texture. It was this time last year that I moved to New York, with some vague hopes and dreams that haven’t panned out in whatever vague way I thought they might.

Perhaps it was the internal feeling of a year passing, though, that made me crave change. The most obvious way to do this was to reevaluate some of my lifestyle choices, like how I needed at least five beers to feel as drunk as my friends, or how the stairs coming up from the subway had become a daunting form of exercise.

I started going to yoga with a dedicated frequency. I stopped eating gluten and was embarrassed to tell anyone. And with this zeitgeist of healthfulness like a wind at my back, I did a rather stupid, shameful thing that I regretted immediately: I bought a 3-day Juice Cleanse.

Now you might be thinking — juice cleanses are well and good, as far as fads go, but isn’t a juice cleanse expensive? Jane, are you rich? I’ll answer your questions respectively: Yes! No!

I purchased the juices, 18 to be consumed over three days, for $150 on Gilt. Now, only a moron who doesn’t look at her finances because it upsets her would spend so much money on juice. Especially since, according to my research, our organs are actually capable of flushing out toxins by themselves, without the help of expensive green elixirs or delicious cashew milks.

But I had the urge to do something drastic, something that would change my life forever, and I had a giddy feeling pressing that “Purchase” button on the Internet. And once I had bought the cleanse, there was no going back. That was my good money, nonrefundable.

I chose the most intense level of the cleanse, “Excavation,” as it was called, because I figured I could take it. The others included fruit juices, which I felt were a waste of time.

At some point the night before, I realized I wouldn’t be chewing for three days. So I ate three peanut butter cookies. And some chocolate. Why had I done something so foolish as to pay money not to eat?

Full of abject terror, I was sure my body would have something to say about this crazy plan. Here is the diary I kept during my three days on the bottle.

I’m on Juice #2 (it’s green, like two-thirds of this cleanse), and I’ve got to say, I don’t hate this. The juice is delicious. There are also so many juices that my fear is no longer having enough sustenance but actually not finishing the juices fast enough. Seriously, I am going to have to start chugging these things. I’m not very hungry right now, because my stomach is full of liquid. Besides juice, I have consumed a few glasses of water and green tea. I have had to pee quite a bit.

I thought the juice cleanse-converted were lying about the sudden bursts of energy, like how I used to lie about vegan cheese tasting like the real thing, but they totally weren’t. I feel like I’m on speed. My room is now photographable. I'm eyeing my closet and wondering if now is the time to go through my “important papers” box, which contains blank checks and some of those W-forms and hopefully my passport.

#3. I’m just blazing through! And farting many smelly farts.

#4, spicy lemonade. This cleanse is giving me a strange sense of lucidity. I took a short walk around Maria Hernandez Park a bit ago, and everything seemed sharp, I noticed so many details. The face of a child in a stroller, who looked exactly like his mother. The weight of my clogs on my feet and the feel of cobblestones underneath. The name of my favorite grocery store, which I had never before remarked upon: Hi! Mango Natural Foods. I passed many smells of food, skewers of meat smoking over grills, and the vanilla aroma coming from Chohula’s Bakery. The smells were pleasing, but not appetite-provoking.

Writing now, though, is difficult, because I have to pee constantly. Bubble bath time. Pee first.

Lying in the tub, I soak like a dirty dish. I’ve romanced myself with a candle, Lianne La Havas, and chamomile tea. I feel like I’m retreating. For three days, I have an excuse to go to yoga and take baths, and be alone. I realize how much I desire, need, to be alone.

Juice #8, and I’m feeling like a green god. The Hulk? Maybe the Mark Ruffalo zen Hulk. I could cure Ebola, or rip a phone book in half. I don’t remember the last time I used a phone book. My tongue has turned green from the green juice.

Surprising: I’m still pooping. Where is this coming from? Confirms my theory of a two-day poop cycle.

Last night, I dreamt I ate a few bites of grilled cheese at a bar before remembering that I was cleansing. “Well, sh*t,” I said in the dream, “I’m not supposed to be eating grilled cheese now, am I?” I took a nap this afternoon, and likewise dreamt of eating a plate of fluffy pink macaron pieces (they were broken). Again the feeling was, “Well, f*ck.”

The cashew milk. I very much look forward to this, more than one third of my daily caloric intake. The thing about the cashew milk is that there’s an aspect of solidity to it. A lot of the ground nuts gather at the bottom in a sediment, clumped together with the agave and cinnamon. So I find myself knocking my head back, beating furiously at the bottom of the plastic bottle until these cashew chunks make their way to my mouth. If I leave any of the nut residue in the bottle, I’m cheating myself. And the fact that the cashew is a solid that I can even chew — this pleasure is not lost on me. I chew with vigor.

Finally getting around to watching the depressing-but-acclaimed films I’ve been avoiding, such as The Dallas Buyer’s Club. Matthew McConaughey’s performance is remarkable. I cannot believe this was the man who once shouted “Ladies of New York, frost yourselves!”

Juice #13. I’m STILL pooping! Where is this coming from? Is my body a poop silo? “You must be eating your organs,” my roommate Maria says.

I could definitely eat something right now. Like, a large meal. I am more dependent on the juices. I came home from yoga, which might have been overkill, thinking repeatedly on the subway: “Juice. I must have juice.” Walking up stairs, I reeled from low blood sugar. It has been four hours since my last juice, way too long. I can tell my body is less than amused.

Juice #17. I drink my “dinner” green juice with my brother at Chipotle while he eats a burrito, not because I’m masochistic but because I love my brother. I babble to him for an hour about this cleanse. I cannot stop talking, and I fear I am loopy on the green juice. He is kind and listens. We talk about how much we hate relationships, and how perhaps we’ll go to New Zealand and WWOOF, then we part ways amicably. On the subway, I feel disconnected from the people near me. Everyone else is connected by the human rituals of meals and eating, and I am apart. I think of the cashew milk waiting for me at home. I cannot wait to chew those solid cashew bits.

The last juice. I’ll miss this ritual, ending my night with this dreamy cashew milk I quite prefer now to the company of men.

In the end, the cleanse was easier than I expected. I didn’t find myself craving Chinese, crawling on my knees in the subway, or calling up old lovers in hysterics. Most remarkably, I briefly had all the anxiety I’d ever tied to food removed. There were no weighty decisions at restaurants, no time-warp grocery shopping. I wasn’t thinking about what to make for dinner while eating chips and salsa, or thinking about dessert while eating stir-fry. My meals were numbers, 1 through 6, to be consumed in order, at least one hour apart and finished 2 hours before sleeping. Like an infant, I was bottle-fed.

As I could have predicted, my beautifully clean room turned back into a trashcan and I went on a cider bender the next weekend (gluten free!). But in the end, this cleanse was more than a physical resetting; they were three-days where I mostly stayed in, wrote, read, and bathed. It was a retreat from New York and the life I had made there.

Most of all, for the first time in a while, I felt like I could change things. Change to what, though, I'm still not sure. Turns out the bottle really doesn't hold the answers.