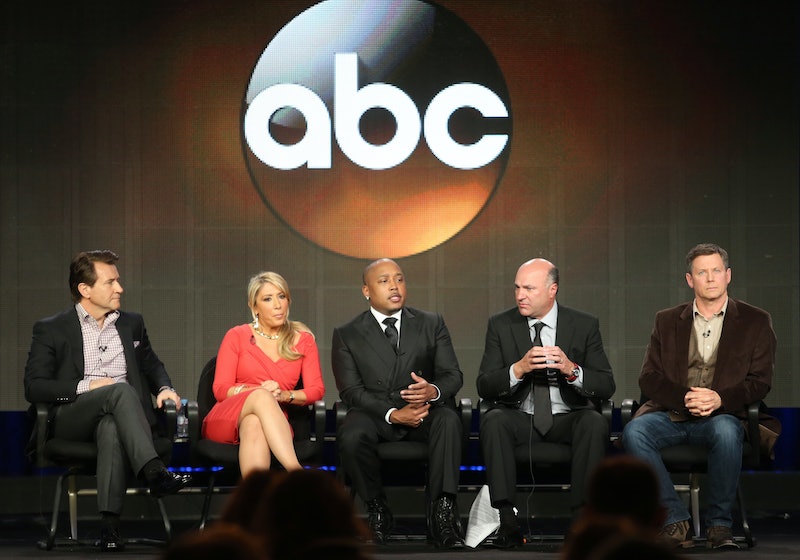 It can be very difficult to create a group Halloween costume — especially at the last minute. First you need to figure out what costumes offer enough options for a group of however many people yours may include. Then you have to come up with a theme that everyone will love. Next, it needs to be easy enough that it won't break the bank or require too much construction. Lastly, and perhaps most importantly, you want to be able to stand out. So while it may be one of your favorite shows, ditch the urge to go all Orange is the New Black with your besties (because that's probably what everyone else will be doing this year), and float in a sea of Shark Tank Halloween costumes instead.

The are a couple of ways to go about it. Which entrepreneurs you embody will depend on how many people are in your group, and of course, who everybody's favorite shark is. Once that's decided, you can be as straightforward as possible and just wear suits or one of those simple solid dresses Lori and Barbara often don. Or if you're up for it, you can take a much more creative route and mix things up a little. Check out the group costume options even the most vicious shark would be proud of.

For suiting up, it's not about what you wear, but how you wear it. Mark Cuban obviously needs a more relaxed tie-less look, paired with some sneakers as a nod to his Dallas Mavericks ownership. Robert, on the other hand, while also tie-less, needs a softer color for his shirt. Mr. Wonderful of course needs a no-butts about it full suit and tie, with a bald cap to complete the look. Same for Daymond, except you get to spice it up with some accessories like earrings, rings, and of course a goatee — feel free to draw one on if necessary. Whoever gets to be Queen of QVC Lori should wear a 3/4 length pencil dress in a bold jewel tone with accompanying statement jewelry. Barbara's impersonator can go with a neutral toned dress, paired with some understated and classy jewels.

If you want to take a Shark Tank costume to the next level, it's going to be prop heavy. It shouldn't be too hard for big fans to figure out how to best represent their shark. For Mark, you obviously need a Mavericks jersey, which you can pair with a fake version of their 2011 Finals trophy. Daymond will obviously require some FUBU wear, as a nod to his clothing empire. Bring a jewelry organizer with you, and show it off at the party to make Lori proud. While there are fun ways to represent each shark, Mr. Wonderful still has to be a suit and tie. Because he's all business all the time (and that's the way we like it).

ACTUAL SHARKS IN A TANK

If you're group is a little crafty, there are tons of ways to make a DIY aquarium costume or easy shark costume. Pair it with one of the outfits or accessories described above, and you've got a clever, more literal take on Shark Tank.

If you really want to have inside joke fun, dress up as the Sharks in their silly Parade magazine photoshoot (you may have to carry the mag around for people to get it, but it will be worth it to watch one of your friends parade through the streets in swim trunks while you're cozy in a suit).