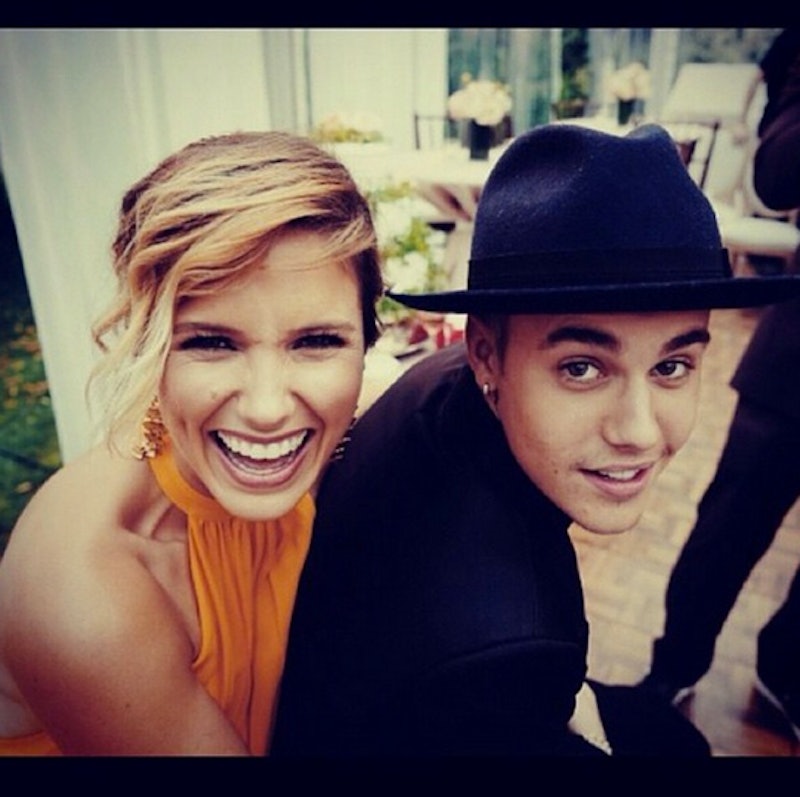 I don't spend a whole lot of time on Justin Bieber's Instagram account because I've gotten my fill of shirtless pictures from James Franco's Instagram. However, one in a while, buried in there among the posts he doesn't delete is something adorable. On Wednesday, Bieber posted a picture of himself and Sophia Bush as they appeared together at Scooter Braun's wedding over the summer with a caption that simply said "Soph ur the best". There was no further commentary than that, which made it near-impossible to figure out why the young singer felt the need to repost the image that first went up on his Instagram in July 2014. However, considering the fact that Bush is a total badass (and she plays one on TV), the question probably becomes "why not" rather than "why".

Bush and Bieber's friendship goes back at least two years now. In 2012, the two of them worked together on a charity event in New York City and Bush sang Bieber's praises to Hollywood Life afterward, calling him a young kid with a good head on his shoulders and a giving nature. When he first posted the picture, the original caption that accompanied it read, "I love this Girl. Such an inspiration for young women. Good seeing you Soph.” From that, it's clear that the two of them inspire each other and found common ground in their extensive charity work.

The picture that Bieber posted prior to the one of Bush, on October 28, shows him hanging out with a group of children in what is probably a charity appearance, making it seem most likely that Bush assisted him with some event or appearance we have yet to hear about. However, it's equally possible that she might have given him some relevant advice, whether about charity work or about his personal life, that he really took to heart. As we very well know from the way that Bush expertly called out an Internet stalker, she's not afraid to stand up for something or speak her mind, which makes her seem like exactly the kind of intelligent and caring person that you would want in your corner when the chips are down.

Considering the fact that the Biebs seems to bounce in and out of trouble, it's great to remember that he has a positive influence in his life like Bush. Coming together for something as inspirational as helping others and maintaining that friendship despite their differences in age, career, and personality is a truly beautiful thing for both of them. And this Instagram photo is nothing short of adorable. Check it out below.