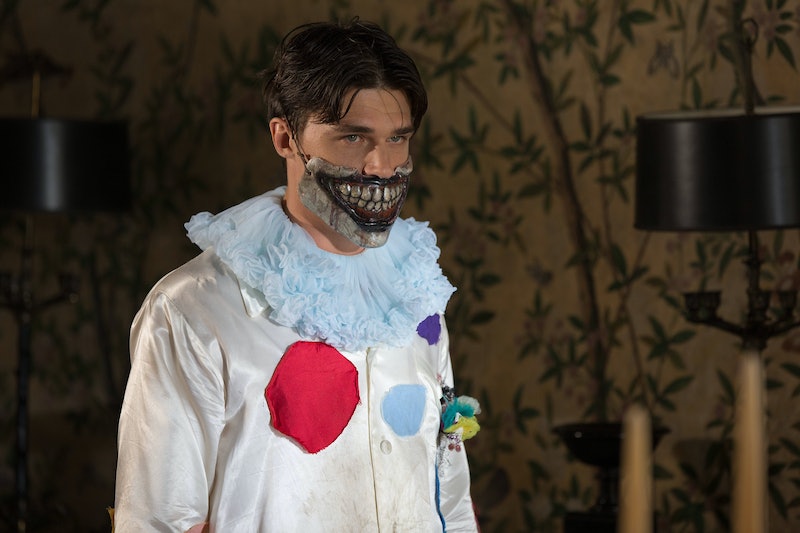 If there's one thing American Horror Story: Freak Show is known for, it's for catching us by surprise. And boy-oh-boy was Wednesday night's "Edward Mordrake, Part 2" episode chock-full of them. Not only did we learn Elsa Mars' horrifyingly kinky backstory, but we also discovered who would be Edward Mordrake's ultimate victim. And let's just say he really wasn't clowning around. That's right, folks — Twisty the Clown has been killed, and since Ryan Murphy made it very clear that death would be permanent this season, we know it's for keeps. So, of course, this leaves two very big clowns shoes open and just waiting to be filled. By who, you may ask? Well, given his horrifying antics throughout this episode (and the season in general), I'd say it's pretty clear that Dandy will be the new Twisty with a capital T.

Ever since we first met him, Dandy has been desperate to feel a sense of belonging. Initially, he hoped to fill that void by joining Elsa's side show. And unfortunately, that rejection will probably come back to bite all of them in the ass now that he's deemed Twisty to be his true role model. ("A very wise decision." - said no one ever.)

As soon as Dandy saw Twisty lying dead on the ground and placed that mask over his own face (gross, BTW), you could tell what his fate would be. It was almost as if that desire to terrorize my nightmares somehow transfused itself from Twisty into Dandy's very being. He's no longer just a protege. He's officially become the clown headliner. However, just in case you were under the impression that perhaps this twisted man child may have a change of heart and see the error of his ways, Patti LaBelle's Dora proved to be the ultimate test.

Once again, these two characters came face-to-face with each other. But this time, there was no hesitation in those clownish eyes. Dandy slit Dora's throat right there in the very same dining room he'd attempted to kill her in once before. But instead of chickening out, he actually followed through. Which begs the question — who will he set his sights on next? Because now our boy's got a taste of murder — and given that ridiculous grin on his face, it's only just the beginning. Watch your backs, everyone.