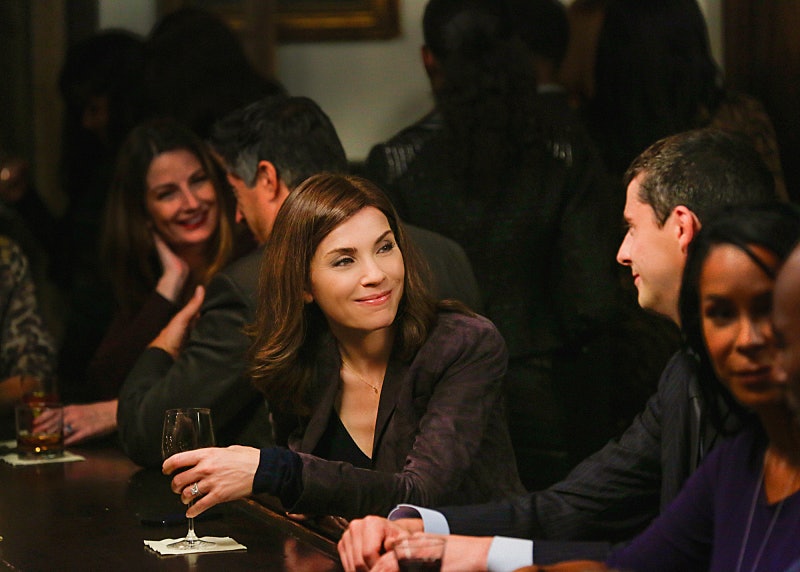 Alicia Florrick (Julianna Marguiles) has a lot of awesome qualities that any feminist in love with well-rounded female characters would marvel at. Intelligent, sharply dressed, complicated, avid red wine drinker, ambitious. But one aspect of her life that seems totally undeveloped? Alicia Florrick's love life. After her former friend/lover/rival Will (Josh Gardner) abruptly died in the last season all the answers we thought we had about that aspect of Alicia's life were thrown out the window. Weren't Will and Alicia endgame? What is going to happen in Alicia's love life? Will she reconcile with Peter? Thankfully, the answer to the last question was a "hell no" with their marriage becoming one of convenience. The other questions found somewhat of an answer in the charismatic, strikingly handsome Assistant State's Attorney Finn Polmar (Matthew Goode). Could Alicia & Finn be The Good Wife's new 'ship?

Finn seems more open and earnest than any man we've seen Alicia's orbit and they have wonderful chemistry together. Seeing Alicia soften around him makes me want to ship them. Almost. The problem? We don't know much about Finn. Even though some fans definitely think Finn is perfect for Alicia, I'm not buying it. The writers have given us brief glimpses of what kind of man Finn is, but not enough to really picture him with Alicia. That being said, he does look good in a suit (or in anything, for that matter).

OK, that's an understatement. He is distractingly sexy. He has a moral integrity that seems to be missing in 90 percent of Chicago's population, so it's surprising he's lasted this long as a lawyer. He's divorced and has a son. But that's pretty much it. As much as I like looking at him on my screen there just isn't much to him. So, where's the good excuse to should we ship Finn and Alicia? Just because we want Alicia to have a happily-ever-after? No thanks.

Maybe I am being a bit harsh on the Alicia & Finn ship. I want to see Alicia happy with a man who brings as much awesomeness to the table as she does. Peter was a terrible, selfish blowhard of a husband. He is the worst. With Will, we finally saw Alicia put herself first. Their chemistry could power the electricity of a small town for the next decade. But he wasn't perfect for her either. Sometimes it was hard to imagine him as a step parent or in a relationship that wasn't veiled with secrecy. Or maybe I'm just saying that because his death still hurts.

With that in mind and the idea that so many fans are 'shipping Alicia & Finn, I have to ask if that even makes sense. And beyond that, the better question is, is that what Alicia wants?

The show hasn't really answered that question, which further underscores the undefined dynamics between Alicia and Finn. But showrunners Robert and Michelle King clearly want him to stick around since they promoted rather quickly to series regular, according to E!, even if Good Wife spoilers suggest they aren't sure when or how a romance will develop between Finn and Alicia.

Thankfully, they didn't make Finn a clear replacement for Will. They are dramatically different men. Will had a cocky swagger. Finn is far more approachable. Will would bend the law to win. Finn sticks to it by the letter. If anything, Finn reminds me of Alicia in early seasons with his moral integrity and earnestness. Considering everything is coming full circle this season including that present day-Alicia resembles the moral grayness of Will, the writers could be angling for something more between Alicia and Finn.

Any other show would have found a way to tease out the love triangle between Peter, Will, and Alicia even with Josh Charles deciding to leave the show. So many female led shows --- of varying quality --- obsess over a love triangle that guides the life of their leading lady. Name me a female led show that is airing right now that doesn't pit a woman between two starkly different romantic options only to drive it to the ground. I'll wait. The Good Wife killed off Will. Then bluntly showed Alicia deciding to stay with Peter simply because their marriage was mutually advantageous to their political and professional goals.

I want Alicia to be happy and in love. Not in a relationship of convenience. Or something that is such a conflict of interest it has to remain a secret. Even Finn can't provide an uncomplicated relationship. If she becomes the State's Attorney, she'd be his boss. And even if she doesn't, they will continue to be on opposing sides in court. Which begs the question, why can't she find a man outside of her cabal of colleagues and rivals?

Sure, the dynamic chemistry between Alicia and Finn is begging to be explored, but Finn is a rough sketch of a man until the writers decide to fill him in. And Will hasn't even been gone that long. Until we see that Alicia and Finn could work beyond flirty smiles and bourbon-laced banter, then we should hold off on 'shipping them. Maybe, I'll just stick to shipping Alicia with her independence — or Alicia and red wine. After all, there is someone she really needs to focus on: herself. I would love to see her focus on her campaign, her firm, and her own desires beyond a man. How awesome and feminist is that?