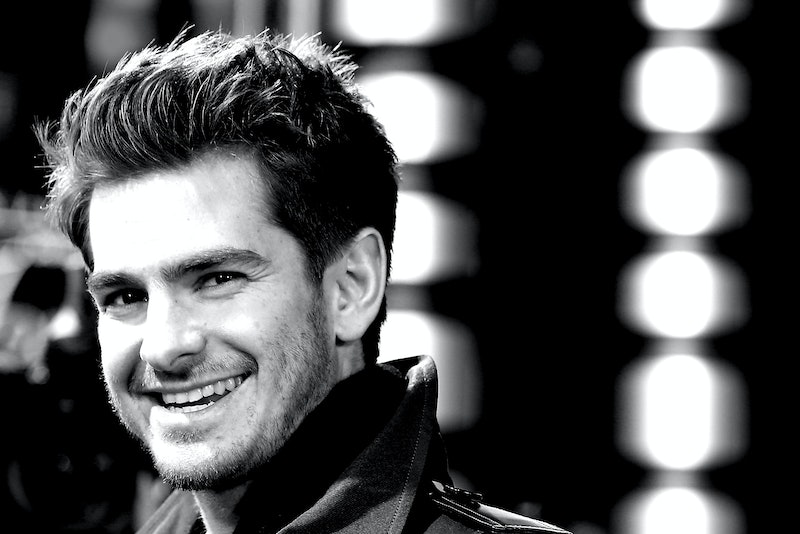 You know how I know Andrew Garfield is a stand-up guy? Because he hasn’t filed a restraining order on me yet. I’m going to level with you guys: I am a (relatively) sane person, but my Andrew Garfield obsession runs deep. It started after the first time I watched The Social Network and only intensified from there. He is my computer background and my all time favorite superhero. He is the inspiration for a creepy Andrew Garfield stalker song that got more YouTube hits than any of my legitimate songwriting. He is the reason that I missed the only day of college that I missed in my entire educational career, because I forced my sisters to go up to New York with me so we could see Death of a Salesman and stage door him.

Don’t ask me what happened when I met him, because I blacked out. Not literally, but almost literally. He looked up at me and his mouth was moving and I must have said something back but if you ever want to know what it was, ask my sisters, because as soon as he smiled my brain cells scattered and took a vacation to who knows where. But you know, everybody needs a test run. The next time we see each other I'll be ready. So ready, in fact, that I have this entire list of all the reasons why we're going to be married:

Rubbish. I can't get over it. Just in case there was ever a doubt of how British he is, he endured the hazing that all British actors face by guest-starring on several episodes of Doctor Who .

Except When He's Not

Mind blown! Andrew has a dual citizenship with the UK and the US. Because he's twice the fun.

Fair warning: if you happen to have a heart in your chest, it will explode. Proceed to watching this video with caution.

Most people know about Andrew's controversial depiction of a trans woman in Arcade Fire's We Exist music video, but a lot of people don't know that he and "girlfriend" Emma Stone (who he's allegedly dating, supposedly in love with, a minor inconvenience to me marrying him which I will address later in this article) are actually huge supporters of the "It Gets Better" Project. Garfield also made headlines last year by asking, "Why can't Spider-Man be gay?" With Marvel Comics already making some major changes to their characters, they can use all the helpful nudging toward being more representative that they can get.

He Is The World's Biggest Goofball

He snuck into Comic-Con in a Spider-Man costume. My inner fangirl is still screaming, I can't turn her off.

He Has His Priorities Straight

He is not the kind of man who would let you go hangry.

Twice now he and "girlfriend" (THE AIR QUOTES WILL REMAIN NECESSARY) Emma Stone have turned the tables on lurking paparazzi to bring attention to charities that need it more.

In the process of finding these gifs I seem to have lost my pants. Dammit. Not again.

But More Importantly, This

On the eighth day, God created Andrew Garfield's butt. Seriously, this butt has an entire Tumblr devoted to it. It's lucky that Andrew can actually act because I'm pretty sure a butt like that would have the ability to get him cast as Spider-Man alone.

He's About As Clueless With Fashion As I Am

Oh, is that a picture of me stalking Andrew Garfield outside of a stage door? How'd that get in there? Also please note how it's a miracle he even got that jacket on his person given the state of those ridiculous string things. I don't know why I find this adorable. I just do.

Because Chris Martin And I Struck Up A Deal

You know what, if I had to pick any member of Coldplay to share my husband with, I'm glad it was Chris Martin, because he's been a total bro about it. And besides, he only wants him on Saturday nights. (Live.)

Sometimes terrible beards happen to good people. What are you hiding in there, Andrew? Surely you can afford to buy pants with pockets instead? I guess it doesn't really matter, because the beard could grow down to the floor I'd still tap that.

The Fact That We've Already Been Dating For Several Years

HAHAHAHA WOWWW you guys thought he was dating Emma Stone? That's hilarious. He's actually been dating a different Emma this whole time: me. It's easy to confuse us because we're both blonde, named Emma (well, her name's actually "Emily" but I'll let it slide), love red velvet cupcakes and look good standing next to Andrew Garfield, but let me assure you, the one who's been dating him all this time is me. Obviously. Clearly. I'll forgive you guys, it was an honest mistake.

(Actually if I'm being real, I love Emma Stone almost as much as I love Andrew and am sitting and waiting for the day they get married and grace the world with their adorably wide-eyed, fierce-browed children. I'm so conflicted about this, it hurts me.)

He Obviously Loves Me