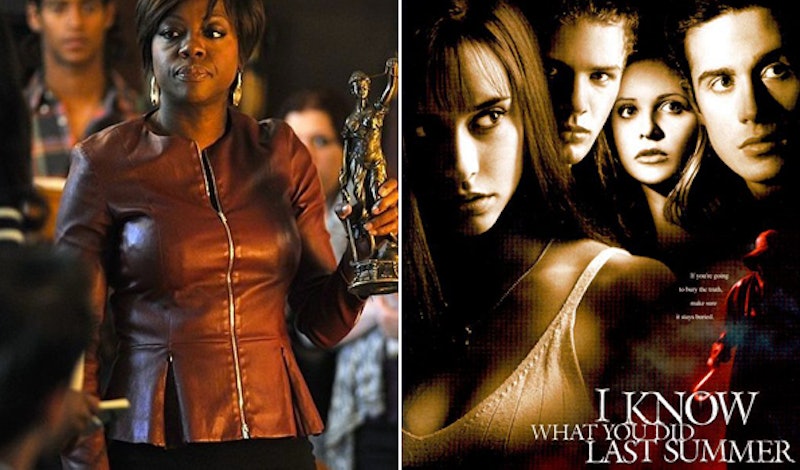 It's finally Halloween and that means that everyone will be preparing to don their costumes to go out for the night. Instead of Trick or Treating, most of us will be partying, but that's only after nightfall. During the daytime, between work and when the sun goes down, it's time to break out your favorite slasher flick. Sure, some Halloween movies were terrible, and I still can't decide if The Nightmare Before Christmas is appropriate for Halloween or for Christmas, but there's a lot of good stuff out there. Or, I guess, you can just watch television. There are a lot of amazing television shows in Fall 2014 that it's not too late to get into.

Then again, why should you have to pick? Most of the television shows are broadcasting their Halloween episodes right now, but I want to take that a step further. If the Fall 2014 TV shows actually were horror movies, which horror movie would each of them be? Most horror movies begin with a completely normal situation and suddenly make it terrifying, so I have no doubt that with a little creative association we can find a Halloween film to match each show. As a matter of fact, I already did it for you. So if these nine shows were horror movies, which ones would they be? Let's find out.

One of the best parts of Scorpion is Walter's relationship with Paige's son Ralph, a misunderstood loner genius child who reminds Walter of his own background as an eerily mature child. Eerily mature children are always just five seconds away from from killing all the adults to satisfy a cornfield god, at least in horror movies.

You know what happens when you miraculously get pregnant without having ever had sex? You're having Satan's baby. And Jane's fiancé is already acting shady, so who's to say he's not part of a cult?

The Flash takes place in a special universe adjacent to Arrow where people have superpowers. Sounds like some Paranormal Activity to me. Especially since, aside from the Flash, becoming supernatural seems to have made everyone else insane.

Considering Michael Myers spent the entire holiday stalking poor Laurie Strode and Stalker is about tracking these kinds of people down before they actually cause harm to their victims, I'd say it's pretty much Maggie Q that's keeping Stalker from turning into Halloween: The TV Series.

7. How to Get Away with Murder

The frame story of everything we're watching on How to Get Away with Murder is how these innocent, manipulative law students who barely like each other ended up hiding a body in the woods on Bonfire Night. I Know What You Did Last Summer is about a killer torturing and killing a group of students who covered up an accidental murder. It's like a sequel to HTGAWM. Or like HTGWM meets Gossip Girl, if Gossip Girl were a killer.

Picture it: a sweet, peaceful little suburban neighborhood where everyone knows everyone and most of your neighbors are white. At this point, I could be talking about The Nightmare on Elm Street or black-ish. I'm pretty sure if Freddy Krueger showed up on black-ish, the same events from the film would play out.