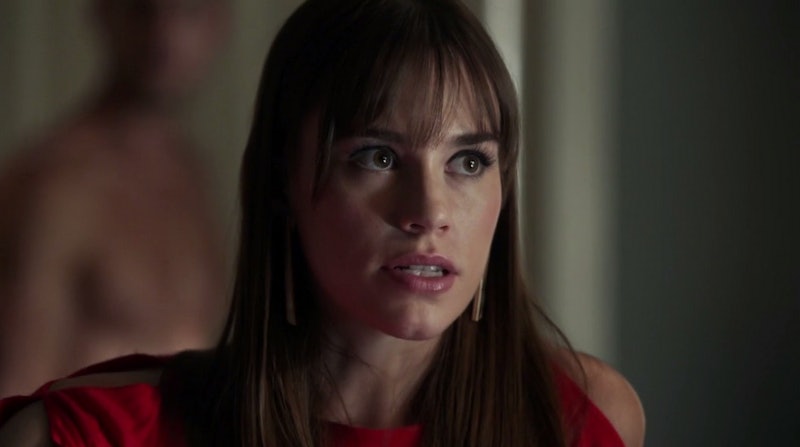 Someone has to say it — Charlotte Grayson is a hot mess. And Revenge Season 4 is really not giving her a chance to get her act together. I mean, how much can you expect from someone who just found out that their sister has been lying to them and their dead father is actually alive? Not a lot. In the second episode of Season 4, Emily told Charlotte that she's Amanda Clarke and that revelation did more harm than good for their relationship. So far on Revenge Season 4, Charlotte's endangered her life multiple times and tried to kill someone. And that erratic behavior is bad freaking news because it makes it seem like Charlotte Grayson might die on Revenge Season 4.

Understandably, things didn't start out so great for Charlotte in Season 4 — the Graysons are broke, Conrad is the most hated man in America, and she was shacking up with Gideon LeMarchal (who was using her by the way). And, naturally, Charlotte was acting out over it and trying to keep up with the standard of living she grew up with. (Remember when Daniel wrote her a check for her Manhattan apartment's rent that was astronomically high?) But, even after Charlotte got rid of Gideon, things have still continued to get worse and worse. In fact, they're getting so bad that her demise might actually be near.

The biggest factor in Charlotte's behavior is how incredibly reckless she's been with lack of concern for her future. Which, in the world of Revenge, always means that things are about to fall apart. Since Season 4 premiere back in September, Charlotte's tried to kill herself, she's tried to kill Emily, she took a bunch of pills and disappeared from David's house, and went home with a strange man after getting drunk or drugged at a club. Charlotte has a blatant disregard for her wellbeing on Revenge Season 4. And, now that Emily's revealed her identity to her and revealed that she cares about her, there's basically a target on her back.

Charlotte has absolutely zero control over her emotions and how she reacts to situations. And when characters on Revenge get to that point — when they start getting careless, emotional, erratic — the show gives them the axe. I mean, look at what happened to Amanda and Declan and Aiden? Bad things happen to people who start to crack on Revenge. Even Madeleine Stowe who plays the Grayson matriarch, revealed that Victoria could die in Season 4 — probably because she's going to lose her mind when David finally confronts her about lying to him about his daughter's death.

The only thing that might be able to save Charlotte from the fate that she seems to be sealing for herself is the fact that she hasn't stooped all the way down to Victoria's manipulative level. Charlotte's ruthless, but she's not a liar and the truth is something that could save her life. If she accepts Emily and David and the possibility of a new family that could save her from the painful memories of growing up Grayson, there might be hope for Charlotte in Revenge Season 4 yet. Well, that's if, of course, she makes it out of that strange guy's apartment from last Sunday's episode.

Bad choices will get you nowhere, girl.