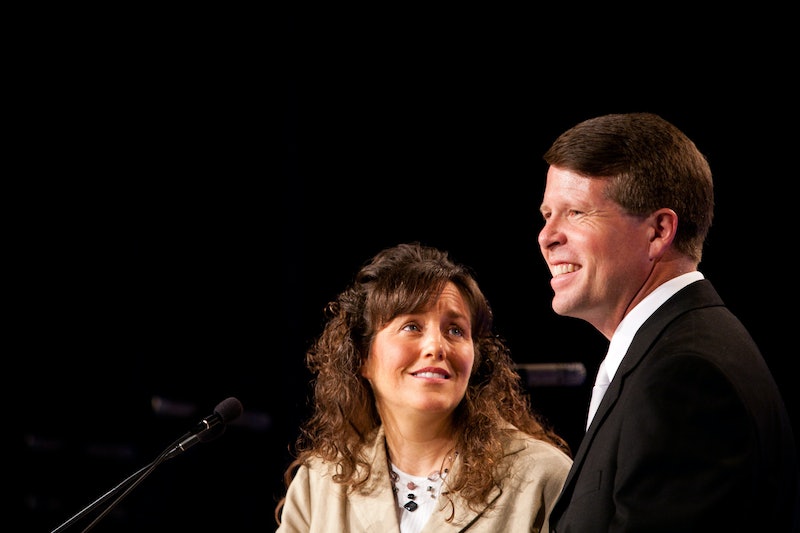 Michelle and Jim Bob Duggar have been reproducing in the name of their faith for nearly 20 years. Honestly, it's difficult to imagine that at one point that they weren't the unit that we've come to know on 19 Kids and Counting. How did Michelle and Jim Bob Duggar meet? Did they have a by-the-books Duggar courtship? It totally had something to do with the big guy upstairs, right?

In the early '80s, Michelle Duggar (neé Ruark) went through a Christian conversion when she was just 15. Rather than being homeschooled as her own kids are, Michelle attended a public high school. When talking about her childhood, she makes no mention of her family being particularly religious. If you can imagine, she even wore pants before she was saved. PANTS! What a novelty. Maybe she even had short hair and wore eyeshadow... Gimme a sec. My brain is exploding at the mere prospect as we speak.

Jim Bob's parents, however, sent him to a Christian high school and were devout members of the Baptist Church. One night when Jim Bob and a friend were out knocking on doors for J.C., they ended up at Michelle's door and invited her to Sunday school. As Michelle told Love To Know, she made such an impression on Jim Bob, that he confessed to praying for a chance "to be her spiritual leader" and asked God, "Can she be mine?" I'm guessing the rest of that prayer had something to do with a compound in Arkansas, a throng of children, and a reality TV show documenting their shenanigans. Oh, and also, an intercom in the house. Amen.

The Duggar patriarch kept at the praying, and a year later, Michelle ended up as an employee of the yogurt shop that his mom owns. Thanks for the cute cashier, God. Jim Bob would pop in to check Michelle out under the guise of doing routine maintenance tasks. Mustering all of his courage, he eventually asked Michelle to his high school "banquet" which she granted with an enthusiastic yes. It must've been so hard to stifle a half-hug right then.

They had a grand old time at the banquet, and spent four glorious unchaperoned (GASP) hours studying the Bible after he dropped her off at home. Michelle recalls praying right after he left: "Father, I can't imagine anyone better than this that you have planned for me. He's such a Godly man." From that moment, she says that their "hearts were knit together" and a year later, when Michelle was 17 and Jim Bob was 19, they got hitched. The year was 1984, they had both just graduated high school. Let's pause for a sec to just talk about these amazing wedding photos. PS. Is Michelle winking at the camera??

Ultimately, it was a little serendipity and a shared interest in that old time religion that brought them together. Equal credit should be given to raging teenage hormones, igniting fires in their loins that could only be quelled with some hard-core hand holding.

More like this
What Does Nancy Jo Sales Think Of 'The Real Bling Ring'?
By The Editors
Twitter Is Unravelling Over Wolverine’s Return For 'Deadpool 3'
By Darshita Goyal
The Spice Girls Just Dropped A Brand New Music Video
By Sam Ramsden
'Survivor' Is Finally Coming Back To UK Screens
By El Hunt
Get Even More From Bustle — Sign Up For The Newsletter