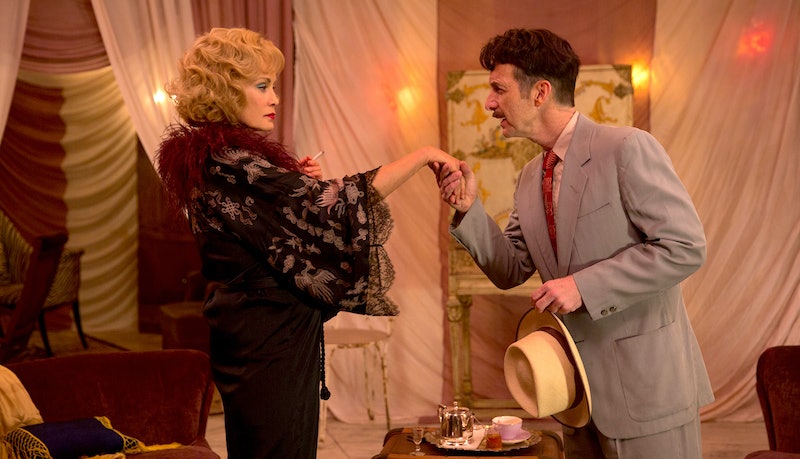 Of course, looking for meaning in a Ryan Murphy show is never easy. AHS: Coven, which seemed poised to teach us lessons about racism, confused everything greatly when it made Kathy Bates' infamous racist murderer Madame LaLaurie somewhat sympathetic (even Gabourey Sidibe's Queenie had a soft spot for her). Glee tried to teach us that the nerdiest, most persecuted kids on campus were often the kindest, best people you could ever meet... and then completely unraveled that promise with every episode after Season 1. But no matter how successfully Murphy gets to his point, he always seems to start out with one.

Freak Show's point seemed obvious enough: Freaks are people too. The initial trailer showed Peters' Jimmy Darling screaming at a car full of Jupiter, Fla. residents who were tormenting him and his show mates and the entire idea that a show called Horror Story would employ a bevy of freaks begged us to question our notions of just what "freaky" really means. I assumed we'd find a Glee-esque blanket appreciation for the good people of Elsa Mars' revue, but instead, it seems that few characters with enough lines to assess are all that good.

Can We Find a Truly Good Freak?

AHS certainly isn't making it easy to find the goodness under the big top. Going through the roster of freaks with the biggest parts, it would seem that shining, pious faces are nowhere to be found, even in our best candidates:

Even Jimmy Darling, who is arguably the best person we can find on this show (aside from the folks who say nothing and are therefore innocent until proven otherwise) doesn't come out looking all that great. Then you look at the could-be baddies — people like angry Dell, untrustworthy faux-freak Maggie Esmerelda, and 13-inch penis-wielding Stanley the Freak Hunter are all clearly teetering towards the villain side of things. Desiree's not bad, but she does seem to be a bit of a jerk. Even Meep senselessly ripped the heads off of cute little baby chicks (OK, that's a stretch, but baby chickens!). And then there was the time the entire freak show participated in an orgy that was also a potential rape.

So, if finding a truly good freak is so difficult, what the hell are we supposed to take away from this outlandish landscape?

The Answer Is Simpler Than It Seems

Think about the people you know in your everyday life. While none of them have likely murdered someone or made a decision that led to someone else's death or cackled at the potential rape of a mean but still innocent woman, they've probably done something bad that they lived to regret — something as simple as hurting the feelings of someone they love or wronging a coworker in the name of their own success. If we take away the outlandish and horrific wrappings of the Freak Show's Horror Show, we have a group of people who — just like any other people you might know or meet — have done, thought, and contemplated regrettable things. Does that make them bad people? Not necessarily. But should they be held up on a pedestal as the most shining examples of golden, glorious personhood? Probably not.

And that makes things tough on television. Experience has taught us that in the realm of entertainment, persecuted peoples worthy of our affection and understanding are sympathetic and covered by a blanket definition of what it means to be "good." How could anyone be mean to this character? They're so good! Don't people understand that they're good and good people shouldn't be laughed at or persecuted? Cue outrage.

The problem with that pattern is that it suggests that someone who is different is only worth being treated like a human because they are good. By that logic, a persecuted person who is not good should not earn the right to be treated like a person. By that logic, difference or freakishness can only be overlooked when some form of good outweighs a freakish quality. By that logic, humanity is only doled out to those who have earned it through deeds. But spoiler alert: that's now how humanity works.

We're Missing The Real Point Of The Freaks

I don't think showing how good freaks are is the point of delivering a cast of protagonists, villains, and anti-heroes who are all "freaks." So, while Freak Show is confusing, it's not failing. By telling a story in which 98 percent of the characters fall under the "freak" umbrella and fall in various spots along the good/evil spectrum, Murphy and Brad Falchuk are forcing us to understand one very simple, very important thing: Freaks are just humans.