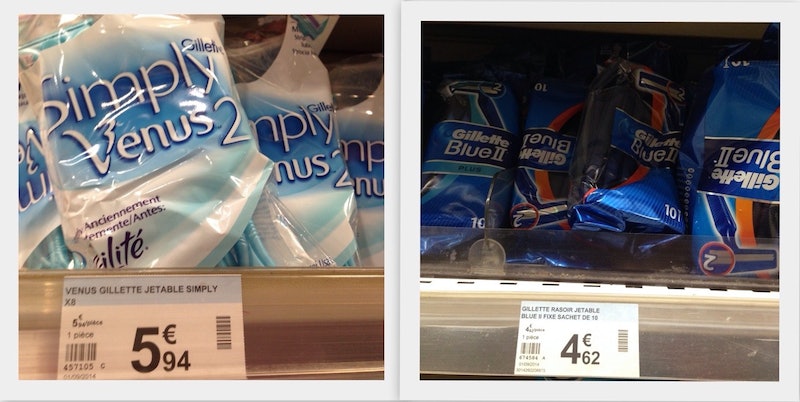 In an admirable move, France has opened investigations on "pink tax" — the invisible, but very real "tariff" that companies slap onto women's products and services. The move was prompted by an online petition from a women's rights group that demanded an end to French supermarkets imposing a "pink tax" on female products that the group says systematically targets women.

The group, Georgette Sand — a play on the name George Sand, the 19th century French author who used a male nom de plume to sell her novels — honed in on a particular supermarket chain, Monoprix, or "one price" in English. Entitled "Monoprix: Stop more expensive products for women! #Womantax," the petition has garnered more than 40,000 signatures since.

Besides female goods, the petition also noted that women are charged more for identical services at the dry-cleaners and hair salons. Monoprix themselves countered that "the larger sale, in volume, of men’s razors allows for a lower retail price," but as France 24 pointed out, how does that then explain the price of women's cosmetics? Georgette Sand also suggested that the company check out its "Woman Tax" Tumblr detailing pictures comparing the price of identical male and female products.

While the French government has promised to launch an investigation, the campaign has the backing of the French Secretary of State for Women's Rights Pascale Boistard who tweeted her support, and asked, “Is pink a luxury colour?”

Gender pricing is not so much of a new issue than a still-here? issue in the States — in 1996, California found that women paid on average an extra $1,351 per year on random costs and fees, and subsequently became the first state in the U.S. to ban gender pricing.

According to Marie Claire, in 2000 trade lawyer Michael Cone discovered that import tariffs on men's and women's products varied — sometimes it would be higher for men (gloves) and sometimes women (shoes). But Cone also found that these discriminatory tariffs had a larger impact on women, because women's products are shipped into the country in higher volumes.

Now we all know in general costs more to be a woman than a man (in more ways than one: the street harassment, wage discrimination, etc.), but news of gender pricing confirmed what we already suspected to be true: that corporations make women's stuff more expensive because their marketing department assumes we'll buy it anyway, because it's pink, smells more floral, has some kind of hideous butterfly illustration on it — whatever.

While that old-fashioned approach to cashing in on women may work — I wouldn't like to think so, but clearly it's somehow working for them; they wouldn't do it otherwise — we aren't blinded by the fact that we are being charged more for goods and services simply because we are the fairer sex.