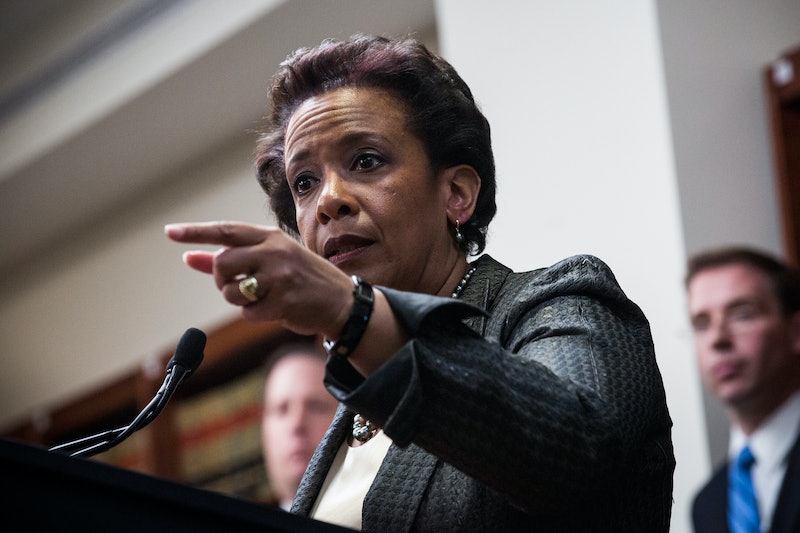 Ever since Eric Holder unexpectedly stepped down from his position as Attorney General last month, speculation as to his replacement has abounded. Now, CNN's got the inside scoop on the newest contender: it's Brooklyn's top prosecutor, Loretta Lynch. Finding yourself thinking, "wait, hold on, just who is U.S. Attorney Loretta Lynch?" That's understandable; she likes to stay out of the limelight. But trust me, you're going to love her.

Filling Eric Holder's shoes — his LGBT-supporting, racism-fightin' shoes — will be a tough job, but if anyone is be able to take it on, my money's on Lynch. She's served under Holder on his advisory committee, and only last year, he appointed her chairwoman. She's dealt with Goodfellas-style mobs, and dirty congressmen, and President Putin's allies. She's served on the Federal Reserve Bank of New York board, and was a partner at the Hogan & Hartson law firm. She's also charged the leader of a Mexican drug cartel with 12 murders, and casually taken down the ring-leaders of a (thwarted) plan to attack New York City subways.

She has everything that we would want in an attorney general. She has intelligence, dignity and the ability to be fair, but also tough. I have the utmost respect for her.

Here are five more reasons to love her:

She Would Be the First African American Woman To Serve

if she is indeed appointed, she'll be only the second African American (Holder being the first) and second female (after the infamous Janet Reno) to serve as U.S. Attorney general. And she'll be the first to be both.

She Was Integral to the Conviction of NYPD Officers

Back in 1997, Lynch was part of a team that successfully prosecuted New York City police officers for violating the civil rights of a Haitian immigrant, Abner Louima, whom the police had violently sodomized with a broom.

During this particular time of severe mistrust in the country's police force, with Ferguson still hanging heavy on the nation's consciousness, having someone who isn't afraid to tackle police brutality will probably go far.

Earlier this year, Lynch's office brought tax evasion and fraud charges against Staten Island Rep. Michael Grimm (yet somehow Grimm was still re-elected to a third term on Tuesday). Which shows that she's not afraid to call out crooked politicians.

She's the Only Person to Be U.S. Attorney for the Eastern District of New York Twice

She was first appointed under Bill Clinton, serving from 1999-2001, and then reappointed by President Obama in 2010. She's that good.

She Describes Herself as "Nerdy"

Seriously, as if you needed more reason to love her at this point, she's literally described herself as "nerdy" in an interview with the Wall Street Journal. As an English major at Harvard, "her idea of 'great fun'.. was reading Chaucer in Old English." I love this woman.