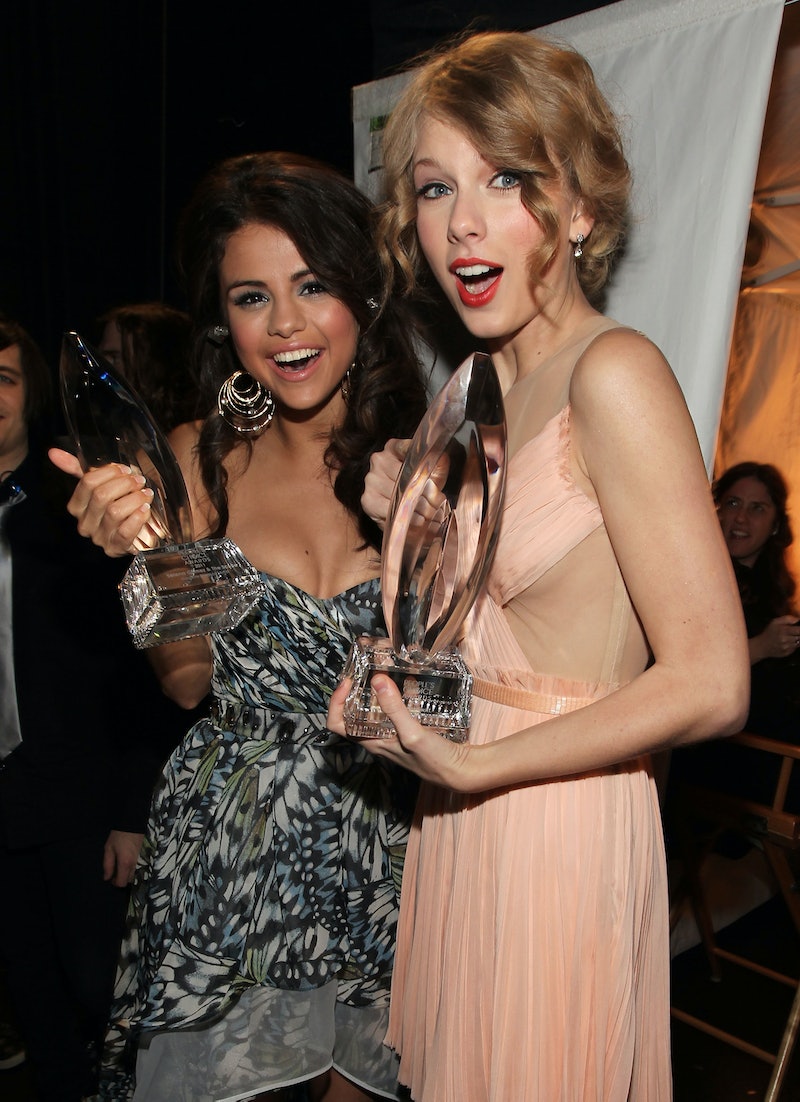 I could spend hours talking about Taylor Swift's 1989 , which sold over 1 million copies in its first week. I mean, it's essentially flawless and absolutely Swift's best album to date. The only problem with 1989 is that it's too good — which really isn't a problem at all, but hear me out. The first seven songs, or really, the full album is so good that you might not be paying attention to the Target-Exclusive bonus tracks that are equally good. (That's assuming, of course, that you bought the Target version of 1989 and if you're a good Swiftie, you should've.) When T Swift first released it seemed obvious that "Welcome To New York," was written for Selena Gomez, considering Taylor Swift desperately wants her to move to NYC. But 1989 might feature another song for Swift's BFF — Swift's "New Romantics" might've been written for Selena Gomez because life's been hard for these two in the past year.

Following Gomez's release of "The Heart Wants What It Wants" and her revealing interview with Ryan Seacrest about her relationship with Justin Bieber on Thursday, it's so obvious that Swift wrote this song for Gomez. First of all, Gomez got super real about how difficult the past year has been for her with the rumors, her relationship troubles, and her inability to slow down. And "New Romantics" is all about pushing through those times with "the best people" in your life.

For all of you out there that are wondering whether or not T Swift and Selena Gomez are still BFFs after the Bieber hurricane, the proof is in the "New Romantics" lyrics.

This pair of BFFs have each been hit with their fair share of bricks from the media — especially when it came to how their relationship was effected by Swift's strong feelings about the Biebz dating her friend. But in Gomez's interview with Seacrest on Thursday, the 22-year-old singer revealed that, around the time she was making "The Heart Wants What It Wants," she was so overwhelmed by the demands put on her and her desire to please everyone that every day was a battle for her to keep her cool.

Again, along with Gomez's reveal that she'd be hysterically crying and then fall right back into character to get onstage so she wouldn't disappoint anyone, the singer revealed that she just felt burnt out. Gomez didn't spend any time on herself and she was just tired of it all. Swift, on the other hand, up and moved herself to NYC because she got tired of her old life.

Taylor Swift essentially wrote 1989 about her relationship with Harry Styles and Gomez revealed on Thursday and "The Heart Wants What It Wants" was inspired by her tumultuous relationship with Justin Bieber. But they both wear those relationships on sleeves, pretty proudly. They're not ashamed at all of what they've been through. (Obviously we know that T Swift thinks higher of Styles than the Biebz, so that would explain the last line.)

"We are too busy dancing/ To get knocked off our feet"

Do I need to explain this one?

"We need love, but all we want is danger"

Both Swift and Gomez recently sang about relationships that were based more on danger, in the case of "breathless moments" and "mad love," rather than just being loved by the person they were with. They need love, but they're drawn to relationships that'll hurt them. Ugh.

"We team up and switch sides like a record changer/ The rumors, are terrible and cruel/ But honey most of them are true"

Look, it's no secret that T Swift was so not cool with the Biebz dating her friend and it possibly put a wedge between her and Gomez. That might be what the last part of this line refers to. (I mean, look at all of the friends Swift made after Gomez and Bieber got back together.) But, they're back on the same side again and Swift alleged supported Gomez wholeheartedly in her release of "The Heart Wants What It Wants," so maybe that record-changer lifestyle is over for them.