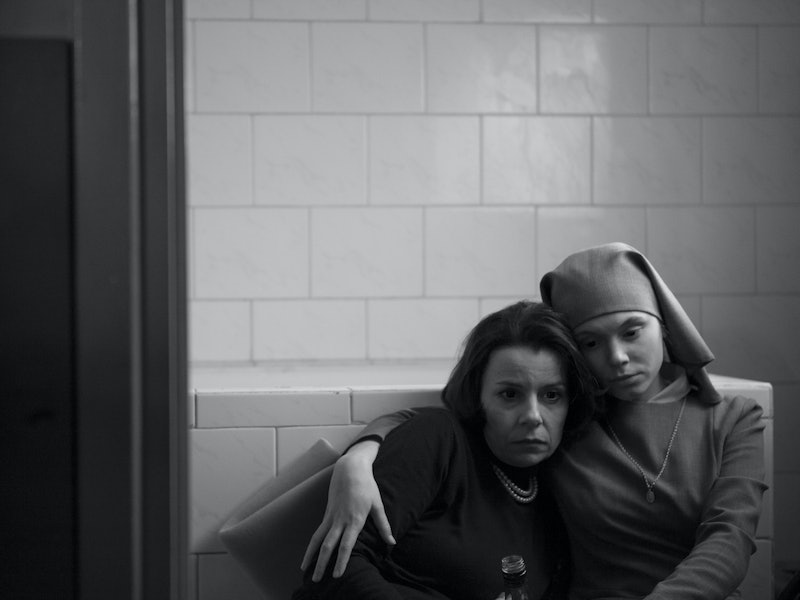 While Paul Feig is making it his life’s work to reinvent just about every comic genre with a female cast — he’s done the bachelor party movie with Bridesmaids, the buddy cop flick with The Heat, and he is developing the secret agent comedy with Spy and a remake of Ghostbusters (which is a genre all its own) — he’s not the only director carrying this operation forward. Now, I wouldn’t quite assume that it's the mission statement of Pawel Pawlikowski to transplant the road trip milieu of Planes, Trains and Automobiles to a female lens in his latest film Ida, but this is certainly a fortunate byproduct of the story he wanted to tell.

Ida hasn’t exactly earned the kind of attention won by Bridesmaids, or even the simple rumors of the upcoming Ghosbusters reboot. But the small, quiet, often intensely dramatic Polish movie about two women navigating post-World War II is the stuff Feig’s dreams are made of: a de facto appropriation of all the tropes and shtick of a 1980s classic in a wholly fresh setting. One that, despite its morbid drapery, is remarkably conducive to the comic tone warranted by anything that might be deemed a bearer of the Planes, Trains and Automobiles torch.

The decree of Ida as such might be surprising to those who have only heard of the movie or read its premise. Its nomination in the 2014 European Film Awards’ top category of European Film, distinct from the European Comedy category, might brand it with an exclusively dramatic reputation (although fellow European Film nominees include the hilarious Force Majeure and humorously macabre Nymphomaniac). However, Ida is in earnest a champion of the comic tradition of the odd couple at odder odds with the world, one perfected by Steve Martin and John Candy.

Young Agata Trzebuchowska, playing approximately 18 years old in the movie, takes on the Martin role — as Anna, she is the stony straight man whose convent-induced anxiety keeps her a clear distance from a functional relationship with the planet Earth. The same degree of dysfunction rests in Anna’s aunt Wanda — the Candy character, played by Agata Kulesza — a woman entirely uninterested in tact or decorum, preferring instead brash honesty and the many gains of hedonism.

After a lifelong separation, orphaned Anna finds Wanda, her only family, and takes to the road with her worldly aunt to discover the unknown facets of her lineage. Along the way, they hit the usual roadblocks: oddball strangers, unexpected detours, run-ins with the cops... some of which make for the funniest parts in the movies this year.

This recipe is one we’ve seen take many forms in cinematic history. So few of these, though, have placed women characters at the proverbial and literal wheel. Trzebuchowska is just as funny with perpetual discomfort as predecessors like Martin; as Anna, she trembles hysterically at every provocation, victim more than anything else to her magnificent array of paranoia.

Kulesza, the comic powerhouse of the movie, plays that Candy-esque disregard with incredible bravado, pumping in an extra layer of cynicism to render her less bumbling than decidedly dismissive of the world on the whole. Passing judgment on everyone in her path as she careens through Eastern Europe, Wanda can steal a scene via caustic eye roll alone.

Granted, anyone heading into Ida expecting nothing but laughs is being misled. The movie is regularly serious and at times terribly sad. But none of this should surprise any viewer preparing for a coming-of-age film set in the wake of the Holocaust. What does need to be called out is Ida’s aptitude at comedy. Not simply as a movie with such a bleak backdrop, but as one occupied almost exclusively by two women.

About 20 years apart in age, Trzebuchowska and Kulesza make a majestic comic pair. They play against one another terrifically, and in collusion against the world even better. While I applaud all of Feig’s efforts to bring new attention to the prowess of today’s female comedians through yesterday’s celebrated traditions, his work in this field is certainly not alone. Even if director Pawlikowski didn’t set out to revamp the road trip comedy for a female voice, his Ida is certainly an example thereof, and one that is more than worth the effort.

More like this
Everything You Need To Know About The 'Knives Out' Sequel
By Bustle Editors
9 Movies & TV Shows That Prove Stanley Tucci Elevates Everything He’s In
By Jake Viswanath and Radhika Menon
At 14, Jurnee Smollett Was Taking Meetings With Missy Elliot & Lauryn Hill
By Chloe Foussianes
A New Scooby-Doo Movie Confirmed Velma Is Gay & Twitter Is Pumped
By Radhika Menon
Get Even More From Bustle — Sign Up For The Newsletter