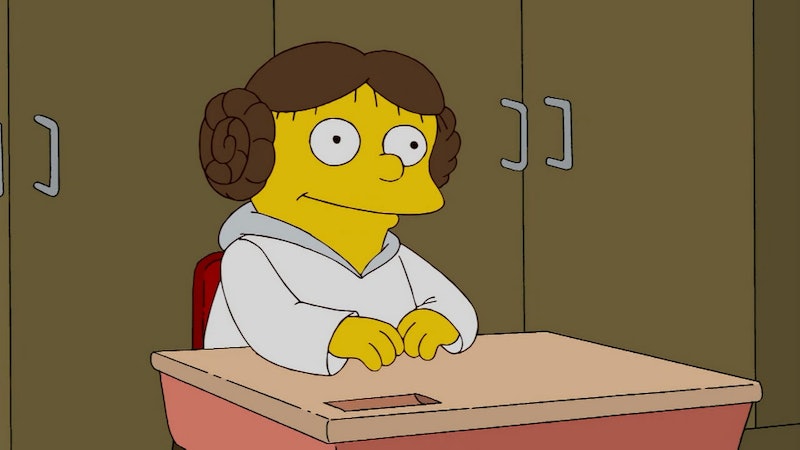 Don't bend your wookies, Simpsons fans, Ralph Wiggum isn't going to die in 2017. This past Sunday, The Simpsons did a crossover episode with Futurama. At the end of the Springfield-meets-The-Planet-Express saga, there was a tombstone that read, "Ralph Wiggum 2006-2017" next to the famously beheaded statue of Jebediah Springfield. Thankfully the foreshadowing during the Simpsorama special was nothing more than a morbid gag, according to Simpsons executive producer Al Jean. When speaking to The Hollywood Reporter , Jean commented, "[It was] just a random joke."

Even though The Simpsons aren't planning to kill off anther character anytime soon (rest in peace Rabbi Hyman Krustofsky and Maude Flanders), there is a little truth to the Ralph Wiggum death hoax. According to Jean, "In a previous future show, we saw Ralph as a police chief with multiple clones — each being killed. Some have interpreted 2017 as the last year of the show, which is possible but I doubt it." It would make sense for the clones to be destroyed in a Simpsorama crossover with the science and the robots and the GLAVIN...as Professor Frink might say. In any case, the choice of the date is probably a reference more deeply embedded in the Simpsoverse than your average Springfield mega-fan could ever uncover.

Now that we can all relax knowing that Ralph Wiggum isn't going anywhere, let's crack open a Duff, grab a slice of floor pie and take in his most important life moments.

Stand Up For Yourself

Be Your Own Fashion Guru

If you feel good in it, wear it.

You do you, Speed Jesus.

And go get them!

Don't Let Pessimism Get in the Way

Because life is too much fun.

And Get into the Spirit!

Me too Ralph, me too.

And Know your Weaknesses

Glue isn't for everyone.

Do what you love

And do it 'til you barf.

Don't be afraid to show how you feel about it.

Because your next awakening could be just around the corner.

Thank Jeebus Ralph isn't going anywhere, for his wisdom is well beyond his years.