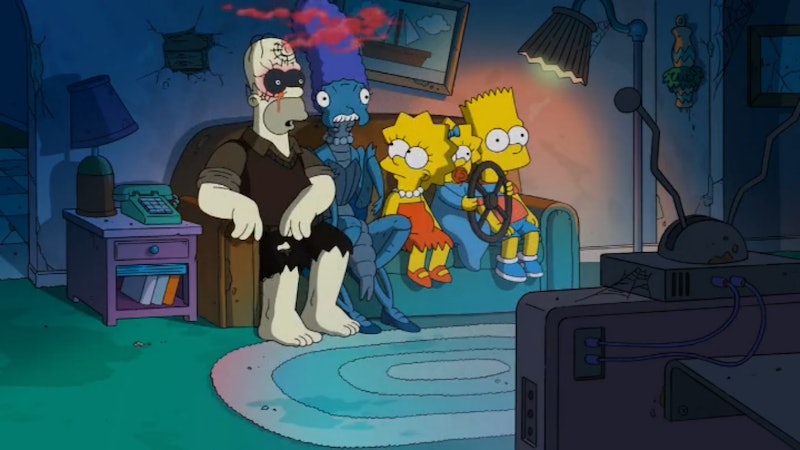 I grew up in the kind of house where the family gathered around the trusty television on Sunday nights to tune into our favorite family, The Simpsons. I was raised on Homer, Marge, Bart, Lisa, and Maggie and the bevy of Springfield residents. I wouldn’t have wanted it any other way. However, growing up Simpsons not only meant I had to suffer through “Simpsons-not-allowed” houses of my friends, I also dealt with some deeply disturbing moments when Halloween rolled around. Year after year, the “Treehouse of Horror” specials were more exciting than snow days or even trading all of my Butterfingers for Reese’s and Twix. As beloved as these Simpsons horror fests were, they also came with some seriously scary moments.

“Treehouse of Horror” has relied on the time-tested formula of taking popular horror stories and giving them a Simpsons spin or putting the people of Springfield in more dangerous and depraved situations than usual. An alien abduction by Kang and Kodos were always welcome and the opening couch gag became more and more shocking as each new special rolled in.

When Homer Freaks Out in "The Shinning"

I totally felt like Marge the first time I saw "Treehouse of Horror V." Sure, there are plenty of overt references to let you know, "hey, this is just comedy." However, in 1994 I wasn't yet well-versed in the work of Stanley Kubrick, so the menacing writing, the haunting music, and Homer's mental breakdown had me sleeping with the lights on for a few nights.

When Mr. Burns' Head Gets Sewn on to Homer's Body

"Treehouse of Horror II" was filled with the stuff that nightmares are made of. From the monkey's paw to Bart's mind control, the mad science experiment that latched Mr. Burns onto Homer was actually grossly horrifying.

When The Simpsons Hang On Nooses

This chilling image was in the opening to "Treehouse of Horror VI." Oh, the things I watched as a kid...

When Groundskeeper Willie burns alive in "Nightmare on Evergreen Terrace"

In this Nightmare on Elm Street parody, Groundskeeper Willie terrorizes the children of Springfield Elementary in their dreams and then they all die in real (cartoon) life. Even though the giant spider Willie was scary, the Willie that burns to death was even more messed up.

When Bart's Long Lost Twin Does this

I remember actually hiding my head under a pillow when Bart's conjoined twin Hugo tries to sew them back together in "The Thing and I." It was like a precursor of fear of Brenda and Billy on Six Feet Under without the horrible sexual overtones.

When Bart turns into a fly in "Fly vs. Fly"

The sound of Bart's creepy fly slurping haunted me.

When Bart's neck did this

When Itchy and Scratchy Try to Kill Bart and Lisa

You'd think it would be a dream for Bart and Lisa to get trapped inside their favorite TV show. It turned out to be a total nightmare in "The Terror of Tiny Toons," when the Simpsons kids run for their lives. It's one thing for Itchy and Scratchy to chase each other with chainsaws. It's another when they go after children.

When The Teachers of Springfield Elementary Get a Taste for Flesh

"Nightmare Cafeteria" was the reason I brought a packed lunch to school every day.

Thanks for all the grotesque imagery that planted itself deeply into my subconscious as a child, Simpsons!