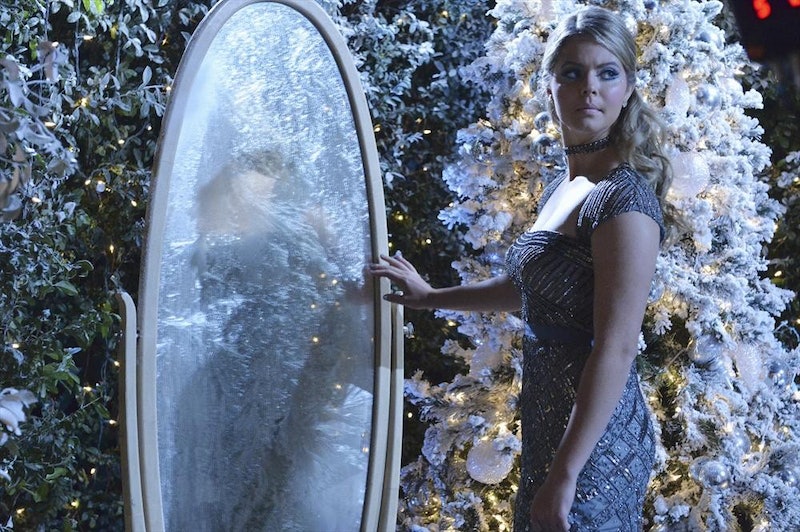 I love you to death, Pretty Little Liars, but you may be making the holidays even spookier than The Nightmare Before Christmas did. Not that I'm complaining, of course — I've waited months for a new episode of Pretty Little Liars (sorry, but that PLL fan appreciation Halloween episode just doesn't count) and the PLL Christmas episode, titled "How The A Stole Christmas" looks like the exact episode to hold me over until Season 5B officially starts on Jan. 6. What makes this episode so exciting? Alison is really, really scared of something; could this mean she's definitely not A?

According to the Christmas episode promo, PLL promises A decked out in white, a creepy tape recorder (is that Mona's voice from beyond the grave?!), and one terrified Alison screaming after being locked in a church. In fact, it's the last piece of that promo that's particularly horrifying — who is Ali so afraid of, and why?

When we last left our little liars, it seemed that the only person to be afraid of was Alison DiLaurentis herself. Right before she was murdered by an unseen blond (hmm...), Mona told the liars that it was Queen Bee Ali who murdered the dead girl in the grave thought to be her own, and that Ali did so out of jealousy. It was just enough reason for Mona to announce that Ali was officially A — and that she had more than enough evidence to prove that it was Ali who had been stalking the girls all along.

Unfortunately, Mona never got to share her knowledge, because she became the victim of yet another Pretty Little Liars murder shortly afterwards. Now, it seems that the tables have turned — the Christmas promo revealed that Ali is the mouse in this perpetual cat-and-mouse game, and it's making me wonder just what she-demon could really be scared of...

She's Running Away From Mona's "Ghost"

We already know that Mona will appear as the ghost of Christmas past, present, and future in "How the A Stole Christmas," as a reference to the Charles Dickens novella A Christmas Carol. But maybe her time on the Christmas episode will reference more than just Dickens — the writers could also riff on the Edgar Allen Poe story "The Tell Tale Heart," about a man whose guilt over a murder causes him to go super cray. We don't know if Ali really killed Mona (my money is on, no, she didn't), but that doesn't mean she's completely blameless. Ali could have ordered the hit on Mona, come to feel guilty, and be "haunted" by Mona's ghost as a result — even if it's all in her head. All that would certainly cause me to run screaming from a church.

She's Running From (Duh) A

Mona may be convinced that Ali is Big A, but I'm not so sure. Well, actually, I'm positive that Ali isn't A, because showrunner I. Marlene King already told us that we wouldn't find out who A is until Season 6. (Whomp.) That could mean that A really is torturing Ali in some way — or, at least, someone posing as the elusive A is.

She's Running From Someone She Tortured

Ali was never nice, and though she may have an army rallying around her now, she still has enemies — and plenty of them. I never saw Lucas as the physical type, but he might just be angry enough at Ali to attack her — especially now that she's suspected of killing Mona. Really anyone at Rosewood High who was personally victimized by Alison DiLaurentis could be suspect.

We've seen the other liars have terrifying nightmares, but we've yet to see one from Ali. Getting a personal look at one of Ali's dreams — without a reveal of who, exactly, she's so scared of — would be an interesting peak into the mysterious high schooler's psyche. Not that it would make Ali any less terrifying herself, of course.