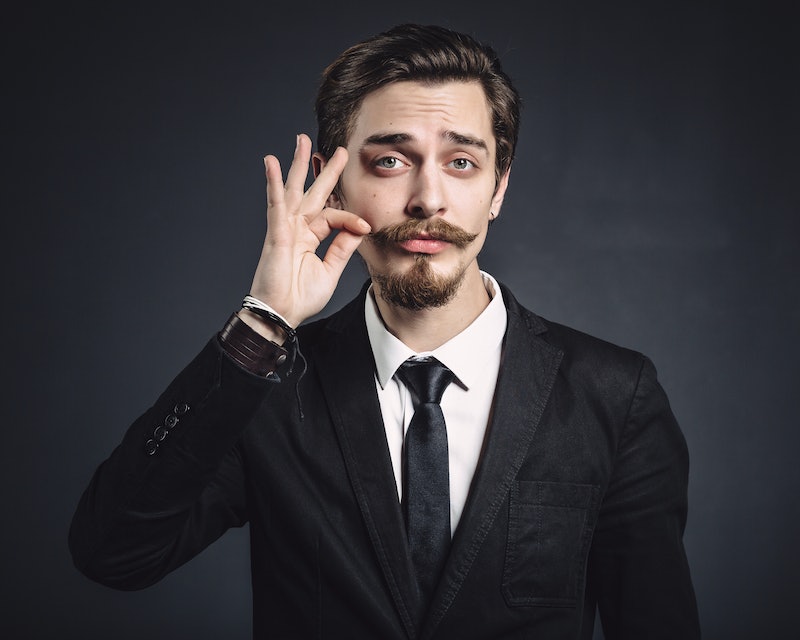 No creepers, just gentlemen. That's the promise offered by Dapper, a new dating app designed to preserve chivalry amid the otherwise cutthroat online dating scene. The app, which launches on Nov. 16 in New York City, intends to circumvent what it terms the "creeper factor," which refers to men seeking "fake intimacy" via random hookups, surface-level chats, or empty one-night-stands.

For the most part, the app is more reminiscent of online dating sites like eHarmony and OkCupid than apps like Tinder to which it will inevitably be compared. The process involves creating a profile with pictures and basic information from Facebook, and then selecting certain dates of availability. Dapper then matches you with individuals with whom you might be compatible, and who also are available on the same days.

In perhaps the only blatant correlation to Tinder, users are able to "like" one another in order to determine their next date. Once two participants have expressed a mutual interest, Dapper sends them on a date to a bar or restaurant. The company has partnered with various New York restaurants like Midtown East's VinoTapa or the Lower East Side's Barramundi Bar, which provide the first drink on the house for all Dapper dates. In keeping with the concept of chivalry, however, female daters are allowed to choose the neighborhoods where the couple will meet.

There's also no messaging before the date, which is refreshing if you're someone (like me) who hates small talk. The decision to eliminate the online "chat" came after Dapper discovered in a July survey that, out of 400 single New Yorkers, 35 percent considered online correspondence before a date useless. According to Dapper founder and CEO Josh Wittman, refusing to allow chatting also helps to foster in-person communication. He tells Mic :

If you believe that you have to talk to somebody face-to-face to get that chemistry, this is the app that will do that for you so you don't end up wasting all that time online.

Unfortunately for men, this face-to-face chemistry comes at a price. And here's where Dapper's promising concept goes astray. The app makes men pay $19 per date, while women only pay a mere $9. Men are also forced to a sign a "Gentlemen's Pledge" that allegedly weeds out the creepers from the genuine love-seekers. In order to use the app, all men must agree to the following statement:

My intention for using Dapper is to meet someone for a real romantic connection. I understand that Dapper collects feedback after my dates and will end my membership if I have acted in a non-gentlemanly fashion. I will not push for sex on the first date. I will be courteous at all times. I know how to dance, at least a little bit. I know the difference between confidence and arrogance. I believe that chivalry is not dead. I know how to cook at least one good meal.

I'm hoping that dancing part is a joke, but the rest most certainly is not. Three demonstrations of behaving in a "non-gentlemanly fashion" and a man will be kicked off the app (at the end of the date, each woman is asked to report "bad behavior.")

Like many, I'm still in the process of refining my thoughts on chivalry, but I think it's safe to say that both the app and its "Gentleman's Pledge" have little faith in women's ability to determine who's a creeper and who's not. While the intent to protect women from the stereotypical misogynist asshole they might find on Tinder is admirable, I strongly question Dapper's ability to spot this man above my own. What's more, what might be considered "arrogance" to some is simply "confidence" to others, and some women feel it's against their feminist principles for men behave in a traditionally "courteous" fashion by holding a door open or offering to pay the check.

On the whole, then, Dapper's "Gentlemen's Pledge" seems quite arbitrary, and not at all a good indication of a decent individual. Still, I'm willing to overlook the pledge seeing as it's a well-intentioned precautionary measure to protect female users. What I can't quite wrap my head around, however, is why men are asked to pay $10 more than women to go on a date. In a climate where women are constantly fighting for wage equality, placing men at a disadvantage seems to present a similar problem in reverse.

All the same, Josh Wittman argues that disadvantaging men is better than the way other dating apps are structured. He admits to being "totally, utterly one-sided in how we approach the process — we're basically calling out the guys... [but] I think that's a bigger issue than the other way around."

By this, I'm assuming he means it's better to have men pay a little extra money and sign a pledge than have a woman go on a date with a douchebag. Unfortunately, I'd argue that there's no way to screen for douchebag-ery, and that even the term itself is subjective. While Dapper's intentions are pure, then, perhaps the company has underestimated the power of a good old-fashioned judgment call.