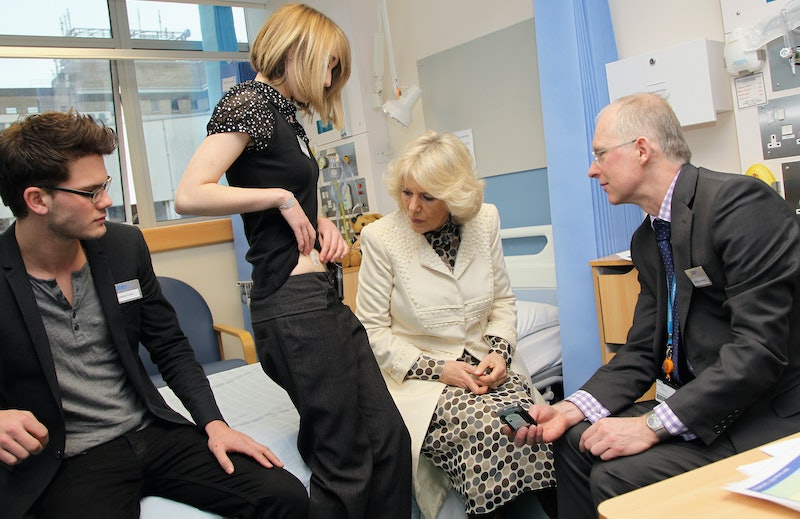 Created in 1991 by the International Diabetes Federation, World Diabetes Day (November 14) seeks to bring awareness to a disease that affects more than 371 million people worldwide, and is projected to affect 552 million people by 2030. In the United States, 29.1 million people are currently living with the diabetes, and 8.1 million of them have not yet been diagnosed, according to the Center for Disease Control and Prevention. In the United States, someone is diagnosed with the disease every 30 seconds.

There are two types of diabetes, and although they both involve the body's inability to regulate sugar and glucose levels, they are very different. Type 1 diabetes is an autoimmune disease in which the person's body can no longer produce insulin. It is usually diagnosed during childhood or adolescence, and is managed through daily insulin shots. Only 10 percent of the diabetes cases out there are type 1.

Type 2 diabetes, on the other hand, is a metabolic disorder that affects people when they're older. Unlike type 1, the person's body can still produce insulin, but is unable to use it properly. In most cases, type 2 doesn't require insulin shots and can be managed through controlling one's sugar levels. Still, as of 2010, diabetes is the seventh leading cause of death here in the United States.

Because over 8 million people are living with undiagnosed cases of diabetes, it's important that you educate yourself on what to look for when it comes to the disease. Here are nine warning signs that it may be time to get checked out for diabetes.

I’m the last person to fat shame anyone, but people who are obese definitely run a higher risk of getting type 2 diabetes. Those with more visceral fat, which is centralized in the belly, have an even higher risk. The reason? Being overweight results in a destabilization of the body’s systems, metabolic and cardiovascular, because of the specific chemicals that the fat releases.

Overeating also stresses the network of cells called "endoplasmic reticulum." When these are stressed and unable to process all the food that's coming in, the network sends signals to "dampen down the insulin receptors on the cell surface." As a result, the body becomes resistant to insulin and high concentrations of sugar glucose in the blood become an everyday problem — aka, diabetes.

if YOU’RE A BIG SODA DRINKER

A 2013 study by researchers at the Imperial College of London found that drinking just one can of non-diet soda a day can up your chances of getting type 2 diabetes by 22 percent. (Now just think about how much damage that will do if you drink several cans of a soda a day.) The same researchers concluded that soda consumption may be a “direct” path to diabetes — no matter what your weight may be.

if YOU Always have to pee

What constitutes frequent urinating is pretty subjective, since if you consume a lot of liquids, you already pee more than those people who don’t drink all day long. But those with both type 1 and type 2 diabetes urinate even more frequently because the body is trying to flush all that unused sugar and glucose out. So if you've noticed that your need to urinate is becoming more pressing, it might be time to see the doctor.

if YOU'RE GETTING URINARY Tract INFECTIONS MORE OFTEN

Women with diabetes have two to three times more bacteria in their bladders than those who do not have the disease. The reason for this is that diabetes affects the body's systems that are meant to protect and keep infections at bay. Because the bladder is constantly trying to flush out excess glucose, urinary tract and yeast infections are pretty much inevitable. There's also a very high risk for bladder and kidney infections, too.

if YOU'RE NOT ACTIVE

Although scientists aren't exactly sure why people are more apt to gain weight and become less active in their elder years, the combination appears to be a perfect recipe for diabetes.Of course, this doesn't mean every couch potato is certain to get diabetes, but if you do love your couch more than getting your active on, and find you have to get up more than you'd like to pee, it might be worth seeing a doctor.

If you're always HUNGeRy, and not gaining WEIGHT

Excessive hunger without weight gain is a sign that your insulin isn't working as it should in to help glucose reach all the necessary cells. Because of this, the pancreas, which makes insulin, overproduces insulin, making you feel hungry all the time. It may seem like a dream to be able to eat everything in sight and actually lose weight, but in reality, it's possibly a bad-news-bears type 2 situation.

you have BLURRED VISION AND HEADACHES

Headaches, especially if you're stressed or suffer from migraines, can be pretty normal for most people, but even those who are used to fairly regular migraines will see an increase in them if they have type 2 diabetes. Additionally, blurred and decreased vision are also signs that things aren't quite right. You can blame sugar levels going awry in the body for these symptoms.

you have NUMB AND TINGLY EXTREMITIES

Although there can be many reasons as to why your hands and feet may be experiencing tingles, if it's pretty persistent, it might be the result of nerve damage from diabetes that has gone undiagnosed for too long.

If you have an itchy vaginal area; a "velvety dark skin change" around the groin, neck, and underarms; or cuts and sores that are taking way too long to heal, those could be possible signs of type 2 diabetes. (Although, I would think if you had a "velvety dark" anything on your body you'd be on your way to the doctor's office, stat.)

More like this
6 Abortion Advocates To Follow On TikTok
By Sara Youngblood Gregory
How To Protect Your Digital Privacy If You Need An Abortion Post Roe v. Wade
By Kaitlyn Wylde
5 Crystals To Manifest Better Sleep
By Megan McCarty
4 Most Outspoken Zodiac Signs
By Kristine Fellizar
Get Even More From Bustle — Sign Up For The Newsletter