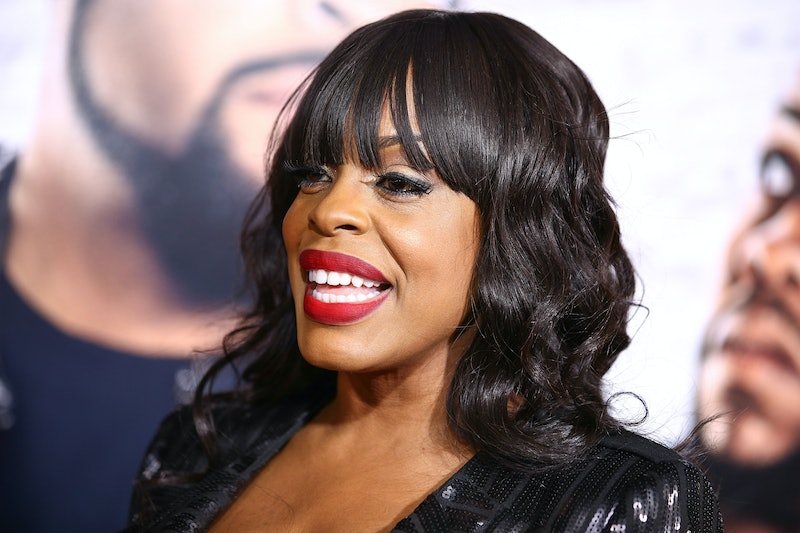 Niecy Nash may be most widely-known for her role as Deputy Raineesha Williams in 88 episodes of Comedy Central's wacky Reno 911!, but audiences are getting to know the actress in a whole new way through a trifecta of disparate roles. First, there's Season 2 of HBO's painfully awkward workplace comedy Getting On , in which she plays straight-laced Nurse Denise "Didi" Ortley. Then there's FOX's The Mindy Project , where Nash is currently recurring as Dr. Jean Fishman, a strict hospital administrator (and a lesbian with a crush on Mindy). And finally there's the upcoming Martin Luther King, Jr. biopic Selma , in theaters this Christmas, where she'll appear in the supporting role of Richie Jean Jackson.

In an interview with Bustle, Ms. Nash described the main difference between her roles on Getting On and Mindy: "You hit the nail on the head when you said the difference is the tone. And the fact that, let's just be honest about it, on The Mindy Project I get to wear makeup. On Getting On, I gotta look like an old hag."

"Getting On is no makeup, no spanx, they give you this lighting that I call The Worst Lighting God Ever Created," she elaborates. "So you feel like you're planted and grounded in this particular world. You come to set looking haggard, so it helps. Whereas The Mindy Project is very bright and very cheery. Mindy has on 45 different shades of pink for no reason. You know what I mean? It's very fun, it's light. The clothes are bright, the set is airy, so it provides just a totally different feel. And the feel of it is what I think helps me meet the characters where they are."

And how did the experience of acting in a serious, Oscar-contending biopic of a legendary historical figure compare to her typical comedic work on television? "Working on Selma was one of the best experiences of my life as an actor," she gushes. "We were completely immersed in another time. Those experiences were so rich, and they were so real." She has nothing but praise for her director, Ava DuVernay, who some are hoping could become the first black woman ever nominated for Best Director. "She has done such a beautiful job with this. That's a big undertaking to take on Martin Luther King, Jr., and she really led the charge in an impressive way. We were all, as a cast, just grateful to be a part of it."

I was curious to find out whether the woman who recently claimed to Playboy that "a BJ a day keeps the divorce attorney away" (which is also advice she gives in her relationship book, It's Hard To Fight Naked), considers herself a feminist. The usually sharp-tongued Nash had a surprisingly eloquent response:

I would have to say I consider myself my sister's keeper. I think there's a part of sisterhood for me that feels innate. It feels like it's part of my DNA to champion the cause, to promote love and wellbeing, to stand in the gap, to encourage women. I have two daughters, and what I propose and what I promote consistently is wholeness. I want you to be whole, I want you to be informed, well-rounded; but at the same time, mastering your individuality in a way that nourishes your soul, as opposed to trying to keep up with what everyone else is doing. I guess that's a longer answer, but the short answer would be, "Yes."

You can catch Nash in Getting On this Sunday night, in Season 2's second episode, titled "Is Soap A Hazardous Substance?" (You can also catch up on the Complete First Season on Blu-Ray, DVD, and Digital HD, just released this week.) She next appears on The Mindy Project in this Tuesday's episode, "Diary Of A Mad Indian Woman." And Selma will be in limited release starting December 25; it opens wide on January 9, 2015.

More like this
Sandra Bullock, Girlboss Extraordinaire
By Matt Harkins & Viviana Olen
Kaley Cuoco & Tom Pelphrey Just Made Their First Public Appearance As A Couple
By Hugh McIntyre
Pete Davidson & Kate McKinnon Are Part Of A Reported Major SNL Cast Shakeup
By Brad Witter
'Gangs of London S2’s New Trailer Is Pure Anarchy
By L'Oréal Blackett and Sophie McEvoy
Get Even More From Bustle — Sign Up For The Newsletter