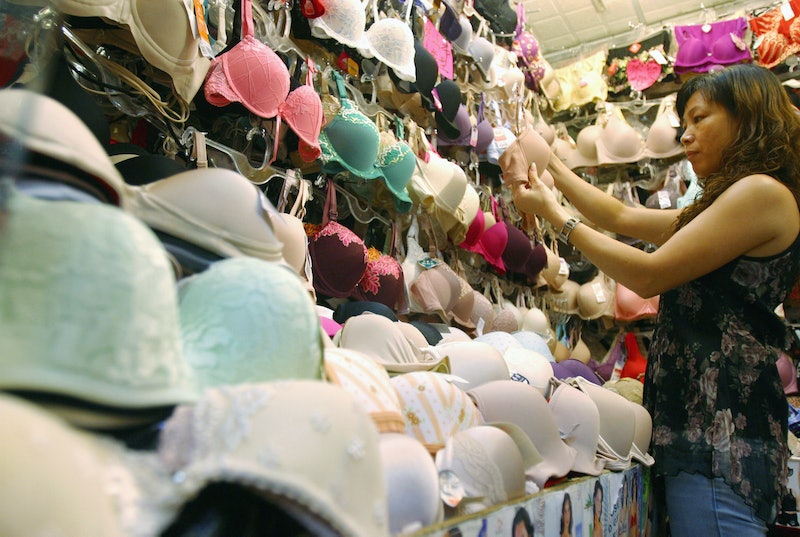 Well, here’s your “WTF?!” for the day: According to Quartz, Chinese retail giant Alibaba has linked the bra size of their female customers with how much money they typically spend. Guess what the link states specifically? You guessed it: The bigger the bra size, the more expensive the spending habits. Now, I don’t speak Chinese, so I can’t read the original source for the data; as such, I’m relying on coverage from other sources written in English (like Quartz), which means I might be missing something in the translation. But does anyone else think that’s… kind of nuts? Like I said, today’s “WTF?!” moment, brought to you by Alibaba.

In May when Alibaba filed for an IPO, Bustle’s Alicia Yu described the company as “the ultimate conglomerate, offering what seems like every service under the Internet sun.” Since they’re so diversified in terms of what they offer, they therefore have a huge wealth of data at their fingertips. Founder Jack Ma has even stated that data mining is one of the company’s priorities. Like all retail operations, they use that data to boost sales in as many ways as possible, which is all well and good — but I can’t help but think that this whole bra size-spending habits link is taking it just a little bit too far. I don’t always agree with Time, but in this case, I think Laura Stampler was spot on when she wrote, “The data point no one asked for!”

The key thing to bear in mind here is that correlation is not causation. There are plenty of other weird things out there that correlate; however, that doesn’t necessarily meant that one causes the other — or that they’re even related at all. Need proof? Tyler Vigen’s Spurious Correlations graphs are a good place to start; as my favorite graph notes, just because the number of people who drowned by falling into a swimming pool correlates with the number of films Nicolas Cage has appeared in doesn’t mean the two phenomena are connected. Similarly, the number of women who spend more correlating with the number of women who wear bigger bra sizes may not mean a damn thing — and for a huge variety of reasons, at that.

Since there’s no further data about the correlation other than the fact that it exists, we can’t assume them to be caused by each other. Consider how many possible explanations there might be for the link. Quartz, for example, mentions that “younger women with less purchasing power may be the ones buying smaller sized bras”; obviously not all small-breasted women are kids, e.g., without disposable income (source: I am a small-breasted woman who is definitely not a kid), but it’s a distinct possibility. Or consider this question: Are larger bras — especially specialty sizes (because most bra manufacturers are silly and don’t make bras the right size for larger-breasted women) — more expensive than smaller ones? If yes, then duh, women with larger bra sizes will probably spend more than women with smaller ones. Or, y’know, the whole thing is just a massive coincidence in the first place. Or any number of other possibilities. They're practically endless.

To be honest, the “link” sounds suspiciously like the results of some pervy dude who was bored at work who decided to fill his time by idly comparing bra size to spending habits. Maybe that’s just me, though. In any event, I’ll be putting this piece of ridiculousness away now and spending my time with more important matters. Like cat cafés. Because cats.