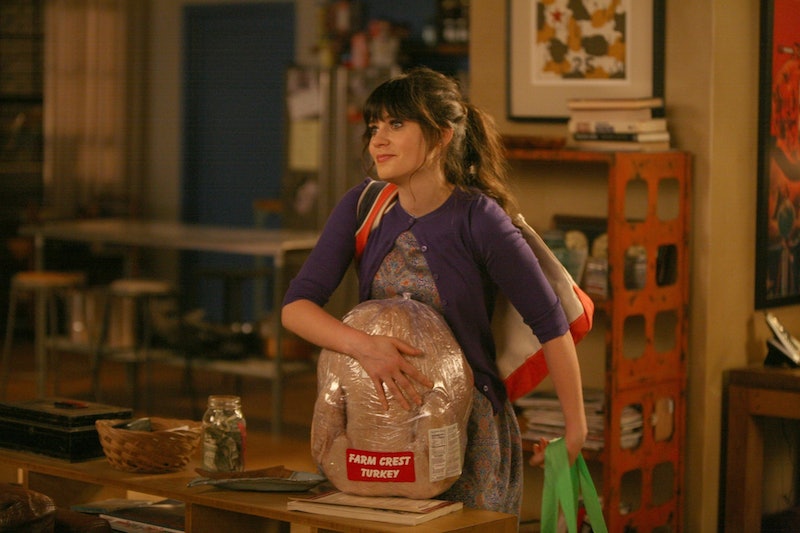 Do you dread annual family holiday gatherings due to your family members' tendency to argue about their clashing political beliefs/spiritual beliefs/whether the two-party system actually works, and if it doesn't, fine, do you have a better idea, missy? Have you ever ridden down the slippery slope from "what have you been up to this fall?" to "GLOBAL WARMING DOES TOO EXIST, DAD!" so quickly, you don't even know how it happened? Do you dream of a world where you can mention the phrase "premium cable" without having everyone you're related to argue on Thanksgiving about what actually happened on the last episode of The Sopranos?

You may believe that there's no hope for your argumentative family unit — that every Thanksgiving, an innocent comment is bound to turn into a monologue about how the Affordable Care Act is sham, or how if they'd known you were going to major in drama, your parents would have never paid for college. After all, you've tried traditional small talk tips, but they simply don't work at family gatherings.

You may think there's no solution. But we believe that there is. The staff at Bustle's Innocuous Family Conversation Laboratory have been working around the clock, and have finally zeroed in on five conversational topics so bland, so beige, so uncontroversial, that they practically guarantee that your family will keep the peace for once. Use these bland tips in good health, friend. And remember: you get to start swearing and having opinions on social issues again the second you get back home.

Everyone loves Netflix! It's ultra-convenient, and keeps you from having to interact with other human beings for hours at a time. And everyone loves Friends! Those kooky kids are funny, good-looking, and never worry about unsexy problems, like their cholesterol levels or whether they have saved enough money for retirement.

Discuss this instead of: How unfocused the new season of American Horror Story seems; why your parents got mad when you gave their HBOGo password to your roommate and that hot barista.

Yeah, so Tom Hanks hasn't been in any movies this year. Guess who doesn't care? 1. Tom Hanks and 2. your relatives. Tom Hanks is a cultural institution that allows you a million conversational angles. Did you know that he recently published his first short story in the New Yorker? Did you know that Sleepless in Seattle is still the #7 most popular movie on basic cable? Did you know that he has Type 2 diabetes, just like Aunt Carolyn? Tom Hanks is a human cookie — most people love him, and even if you don't, whose heart is dark and empty enough to go off about a sweet, innocent cookie that just wants to please us with triumphant tales about the strength of the human spirit?

Discuss this instead of: Tom Hanks' son Chet Haze's "rap career;" the fact that there is kind of actually some statutory rape in Big (I mean, the Elizabeth Perkins character thinks he's a grown man, but isn't the whole thing kind of unnerving?)

MARLEY AND ME BY JOSH GROGAN

Sure, I never got around to reading it (but I've met a few dogs, so I think that I get the gist). Anyway, this holiday season, we're all in luck: Marley and Me is now being turned into a TV show, giving you a great opening to bring the book/movie up again with your relatives, and let them go on about it for a good 10-15 minutes. And it doesn't just have to be Marley— any kind of non-fiction book about how a cat, a horse, igunana, or whatever other random animal made the life of a lonely human better is surefire safe territory.

Discuss this instead of: Where you stand on the Lena Dunham molestation accusations; how you can't believe that schools are still banning Toni Morrison's The Bluest Eye.

Did you hear about the paralyzed groom who made sure that he could dance at his wedding? Earlier this week, an Afghanistan vet who got paralyzed from the chest down in a motorcycle accident reveled that he had his friends secretly build him a special harness, just so that he could surprise his wife and dance with her at their wedding. Just typing that out made me a little teary, and I'm a godless commie harlot who gives money to Planned Parenthood — imagine the impact it will make with some of your ultra-wholesome relatives.

And if that's not the right fit for your family, there's always lots of news stories about lost animals reunited with their owners after a long time apart, strangers who randomly paid each others' bills, or tales of heroic children. I suggest scanning the Huffington Post's "Good News" section — in addition to these kind of stories, there are also a ton of videos, and nothing can ensure a calm family gathering like a steady supply of "dog that thinks he's a person" videos.Discuss this instead of: How there are still new ebola victims in the U.S.; how you had to switch anti-depressants because the old one was hampering your libido.

Did you know that most American turkeys are raised in Minnesota? 46 million of them came from the state in 2012. Did you know that astronauts who are in space on Thanksgiving usually celebrate the holiday, and that NASA has a special Thanksgiving menu for them? Did you know that turkey was served on Neil Armstrong's Apollo 11 voyage to the moon? Did you know that Abraham Lincoln was convinced by a magazine editor named Sarah Hale to make Thanksgiving a national holiday — and that Hale also penned the nursery rhyme "Mary Had a Little Lamb?" Did you know that "black Friday" is the busiest day of the year for plumbers? (yeah, that one's a little gross, but it goes over pretty well with rowdy uncles and younger cousins).

There's a universe of ultra-banal Thanksgiving trivia out there, just begging you to memorize it. This stuff is the secret weapon of pointless and inoffensive family holiday talk, and there is no way it will not work. If I'm wrong about this, may Snoopy, the longest-running balloon at the Thanksgiving Day parade, come down upon me and crush me where I stand!

Discuss this instead of: The poor voter turnout at the midterm elections; the current government push to overhaul the immigration system; the fact that 12 percent of Americans don't eat turkey on Thanksgiving, including your little sister, who just called your family "murderers" and ran out of the room crying.