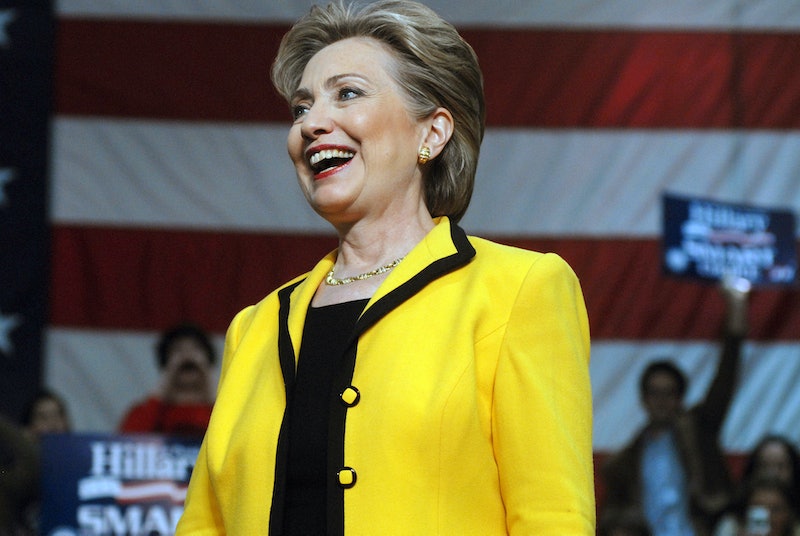 I don't know about you, but to me, it feels like we've been playing the will-she or won't-she game with the former Secretary of State forever. Is she in, or is she out? Is it going to be Grandma Clinton or Madame President? When, oh when, will Hillary Clinton finally announce her bid?! Well, according to Virginia Gov. Terry McAuliffe — a close friend of the Clintons' — the wait might finally be coming to a close. In fact, we can expect a decision in the next sixty days.

Said McAuliffe to the U.S. News & World Report this week:

She's got to make that decision and she's got to spend the next 60 days making that decision. Obviously I'm close friends with the Clintons, I chaired her last campaign. If you know Hillary, she's going to make up her own mind. I tell you, I hope she runs. It's time for a woman president of the United States of America.

Put the woman issue aside for a minute – she's tough, she is smart, she is very pro-business, she will get this economy going. She will help the middle class. So I'm hoping she runs, but you know, it's her decision. But I'm really hoping she runs, but I'm leaving that decision to her.

To be fair, in spite of the seemingly endless series of teases and clues, mid-January is in fact a date Clinton has been promising for a while now. In spite of hopes that she might announce sooner — especially following some heavy Democratic losses — the new year has always been the real contender. Back in September, she told an audience in Mexico City that “I am going to be making a decision around, probably after the first of the year, about whether I am going to run again."

And the decision to wait 'til then makes sense. As Bustle previously reported:

If she does follow through with this schedule, it wouldn’t be surprising, based on recent history. As NBC News observes, her 2008 campaign was initially launched in earnest in late January, 2007, when she announced an exploratory committee. And as long as we’ve been waiting for her to decide, the wait has been pretty fair. Running for president is a staggering commitment, both physically and mentally, and announcing in January would commit Hillary to at least a dozen months of life in the spotlight — and many more, if things went well.

It's okay, guys. January just around the corner, now.