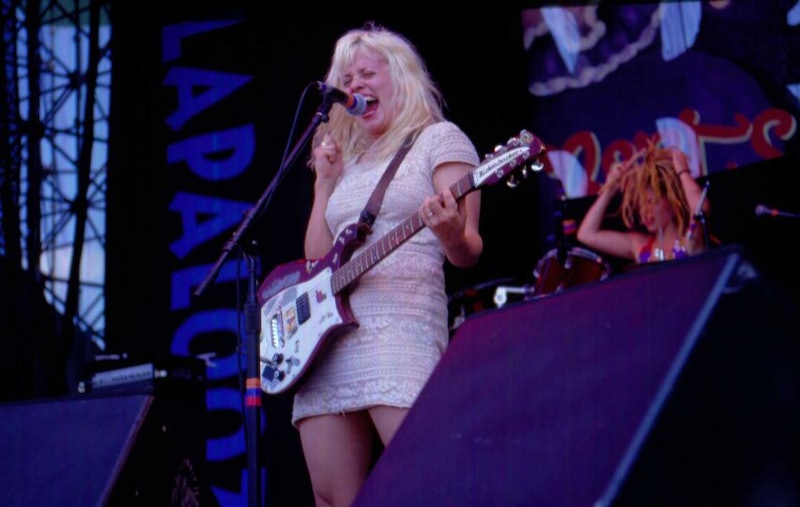 It's a glorious day: the babes of Babes in Toyland announced they're playing their first show in 18 years. But if you live anywhere but LA, then unfortunately it may be a little hard to see them live. However, it does give hope to the rest of us that a tour may be in the works, and we may see the return of the most blatantly '90s band of all time.

See, nobody gives Babes in Toyland the credit they deserve considering they were in the eye of the grunge hurricane. Maybe it's because they didn't have the political ties to the Riot Grrrl scene in the same way as Bikini Kill. Maybe it's because frontwoman Kat Bjelland, a pioneer of the now cleanly imitated style kinderwhore, has always been a side-story in the mythology of Courtney Love. Or maybe they were just far shriller and vulgar in comparison to other all-girl musical trios, like the similarly re-united Sleater-Kinney.

In spite of all this, Babes in Toyland is the perfect example of everything that was going right with '90s girl bands—and I mean, really all '90s bands—of the time. They had that angle of subverted femininity mixed into a creative, trippy aesthetic. They paired a warbling guitar sound with a howling voice that, as much as I love Love, far surpassed her vocals. Babes in Toyland were unapologetic, and they displayed a rawness so lost in music today.

In honor of these fierce survivors, here's a brief but important ranking of all the Babes in Toyland videos, by just how much they showcase the best (and the weirdest) of the '90s

I mean, it's a retro pastiche of '60s psychedelia, girl bands like the Shangri-Las, and platforms of greatness like The Ed Sullivan Show. While the latter is something also played upon in Nirvana's "In Bloom," this is explicitly (although intentionally) NOT '90s. Great song, though.

I actually considered putting this before "Sweet 69," since it's a goddamn cover of "We Are Family," probably my least favorite song to hear at weddings. I mean, SERIOUSLY. But I think that because it's played for irony, and because it features an array of colorful characters (girls with shaved heads, etc.) it gets pushed a notch further.

It's a black-and-white stop motion of naked dollies. This absolutely SCREAMS kinderwhore vibes and discordant female aggression, but for a lot of Gen Xers it might be a bit to abrasive. It can totally harsh your mellow, you know?

The lyrics to this make 0 percent sense, and they're pretty much just sandwiched between some signature Bjelland banshee wails. It gets '90s cred, though, from being one of the BiT videos featured on Beavis and Butthead. "This sounds like, kind of like one of those records you get for Halloween. Like, those sound effects records of people screaming and stuff," Beavis notes. He's not incorrect.

"Bruise Violet" is actually the clearest picture we see of the kinderwhore style, plus it may-or-may-not be about the aforementioned Love, which is SO 90s. It surpasses the previous video for being both of those things, and also featured on Beavis and Butthead. Really, that's how MTV used to measure greatness.

Where to begin? The grotesque overweight man? The ominous spooky forest? The cardigans? The beanies?The over-saturated color? More stop-action? More kinderwhore? This is probably one of the most '90s things of all time, you could leave it as is and it could easily double for an Alice in Chains or Soundgarden music video. It's such a snapshot of the era down to the (spoiler alert?) ending where they randomly show a taxidermy squirrel. What the hell, right? But "what the hell" in like, the best way possible.

More like this
10 Eurovision Moments That Celebrate The Weird & Wonderful Camp Extravaganza
By Sam Ramsden
Sophie Ellis-Bextor Turned Down Being A Eurovision Judge For This Wholesome Reason
By Rachel Mantock
Stormi Just Walked A Red Carpet With Mommy Kylie Jenner & Daddy Travis Scott
By Hugh McIntyre
Is Megan Fox Pregnant? MGK Gave A Shout-Out To Their “Unborn Child” Onstage
By Hugh McIntyre
Get Even More From Bustle — Sign Up For The Newsletter