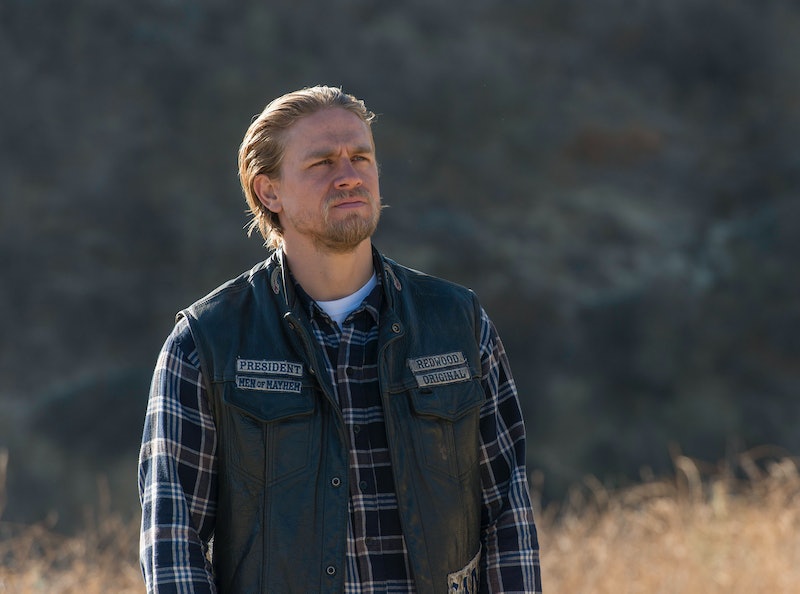 Can we all agree at the point that the series finale of Sons of Anarchy is going to be a complete bloodbath? Anything else would be a surprise and, to be honest, kind of a letdown. As many of you diehard fans might agree, it seems more and more likely that Jax will die at the end of the Sons of Anarchy. He's slipping up, both in his reign as the SAMCRO leader and psychologically. Eventually his whole world will come crashing down completely. In fact, the collapse has already begun with the death of Bobby (can't talk about it, might cry) and many, many other falling pieces. So why am I so sure of Jax's eventual death? We all have our reasons, and here are mine.

The show has been foreshadowing for weeks now that things will end bloody and of course, there's the comparison of Sons of Anarchy to Hamlet with Jax being a motorcycling, tough-talking version of the titular Prince of Denmark from classic the Shakespeare play. In fact, since the ad campaign for SoA Season 7 began with an ominous skull appearing on Jax's back and the promo with the skull appearing on Jax's face, the ending of the series felt all but locked. But since Season 7 began, and now with Tuesday night's episode "Suits of Woe," there are more and more obvious clues that confirm Jax's end upon Sons Of Anarchy's last ride.

Here's the thing, guys: Jax will never get over Tara's death. Even if he finally kills every single person in America, it'll never fill the hole left by Tara's death — especially if Jax kills Gemma in the process (which, despite my original thoughts, seems more likely than ever). It's possible that even if Jax finally avenges Tara's death, somehow the bloodshed will comeback to kill him. Or maybe he could even take his own life if he really can't live with the pain he's caused trying to avenge her?

2. He's Trusting Too Many People

There's Tyler, Juice, and God knows who else Jax is tentatively trusting to do his bidding. With Juice, if he doesn't follow through with Jax's plan, there's still a high chance Juice will die. But Tyler is snitching on Marks and Moses for SAMCRO. I wouldn't bat an eyelash if it turns out he stopped being loyal to Jax and turned on him once he felt his life was in danger.

Y'all seriously. I can't even imagine what he could do to Jax. Plus there's literally every other gang in the area that probably wants Jax dead and SAMCRO desperate.

Jax's kid might be a sociopath and it's entirely possible he could take down his father. Whether this seems too unlikely or not, I stick by it. I don't trust that kid.

This is the big one. When Jax finally discovers Gemma's secret and realizes how much blood he's shed and how many people he's destroyed only to find out the love of his life's killer is his mother, things are not going to end well for anyone. Here is where I can't help but imagine Jax or Gemma making it out of this epic saga alive. Whether it's because Gemma kills her son or Jax tries to kill his mother but Nero saves her, or even stranger if one of them kills themselves, the fact that Gemma's the reason for Jax's breakdown has always been, and always will be, a huge reason why I believe Jax can't survive the series.

6. Building Tension With His Brothers

Killing Jury was a tense moment for the SAMCRO brothers, despite Jax thinking him to be the rat, and despite their loyalty to Jax throughout Season 7. Bobby dying was also a tense moment for the boys. Could it be possible that Jax's brothers will vote that he is no longer fit to lead and that his reign must come to a bloody end? It's not an unpopular theory, despite how much loyalty we've seen from the brothers so far.

7. Because How Else Could It End?

Honestly, if Jax lives we'll be happy for a split second because Charlie Hunnam is awesome. But if you really think about it, there's no way Jax will, and more importantly should, survive. Jax's time to die has come. There's really no doubt about it.