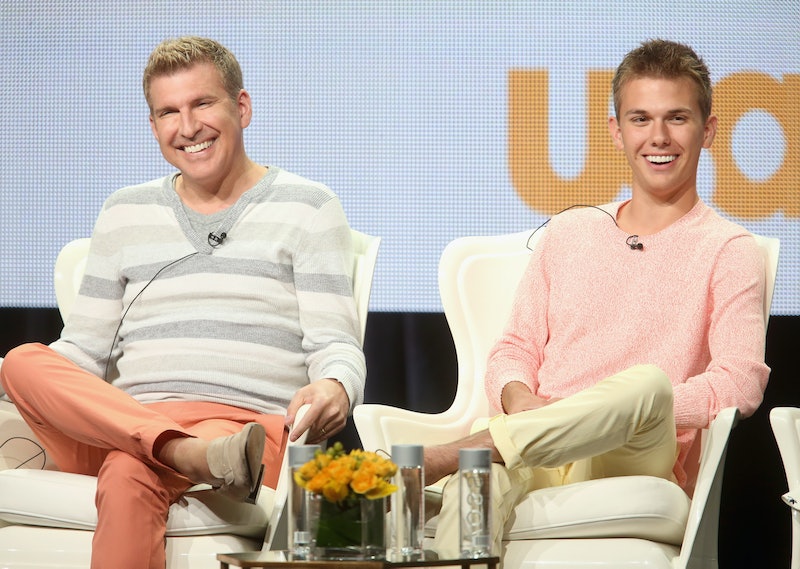 If I've learned one thing from USA's Chrisley Knows Best, it's that I'm really, really glad that Todd Chrisley wasn't my dad when I was a teenager. Anyone who's seen the show is well aware of the crazy parenting methods Todd employs to keep his kids — particularly Chase and Savannah — in line. Over the past season and a half, we've seen iPhones go for a swim, grandma acting as a chaperone on dates, and heavy-handed punishments doled out left and right. But despite the fact that Todd is strict with his kids, you'd be crazy to doubt how much he loves them. And if you asked his 18-year-old son, Chase Chrisley, he'd tell you that he's good with it.

When I chatted with Chase recently, I asked him if his dad is really as hard on his kids as he seems on the show. And while Chase was quick to confirm that his TV persona is exactly how he acts in real life, he was also just as quick to mention that he wouldn't trade his dad's love for anything — even though sometimes his dad's antics do make it hard for him to get away with much.

"I have to remind myself that that he has my best interests at heart," Chase said. "But I would rather have him be in my business than not, because I know it's all out of love."

And when it comes to love, the Chrisley family has a lot of it. According to Chase, opening up their lives to the rest of America via the looming USA cameras has brought on its own set of challenges, but its only improved his relationship with the rest of his family for the better — and when all is said and done, he's glad that they decided to take on the show, what he describes as "a wonderful opportunity."

This is definitely good news, considering the fact that the Chrisleys have quickly surpassed the Kardashians in my heart as my favorite reality show family. And fans of the show have plenty to look forward to. Not only has Chrisley Knows Best been renewed for a 12-episode third season, but also a half hour holiday special that will air next month. I can't wait!

More like this
What’s New On Netflix: 'Stranger Things' & 'Somebody Feed Phil' Return
By Arya Roshanian
What’s New On Netflix: A Victoria Justice Rom-Com & The Return Of David Letterman
By Arya Roshanian
The Joys of Eating
By Samantha Rollins
Kendall Jenner Isn’t Ready To Have A Baby Amid Her Mom’s Wishes
By Jake Viswanath
Get Even More From Bustle — Sign Up For The Newsletter