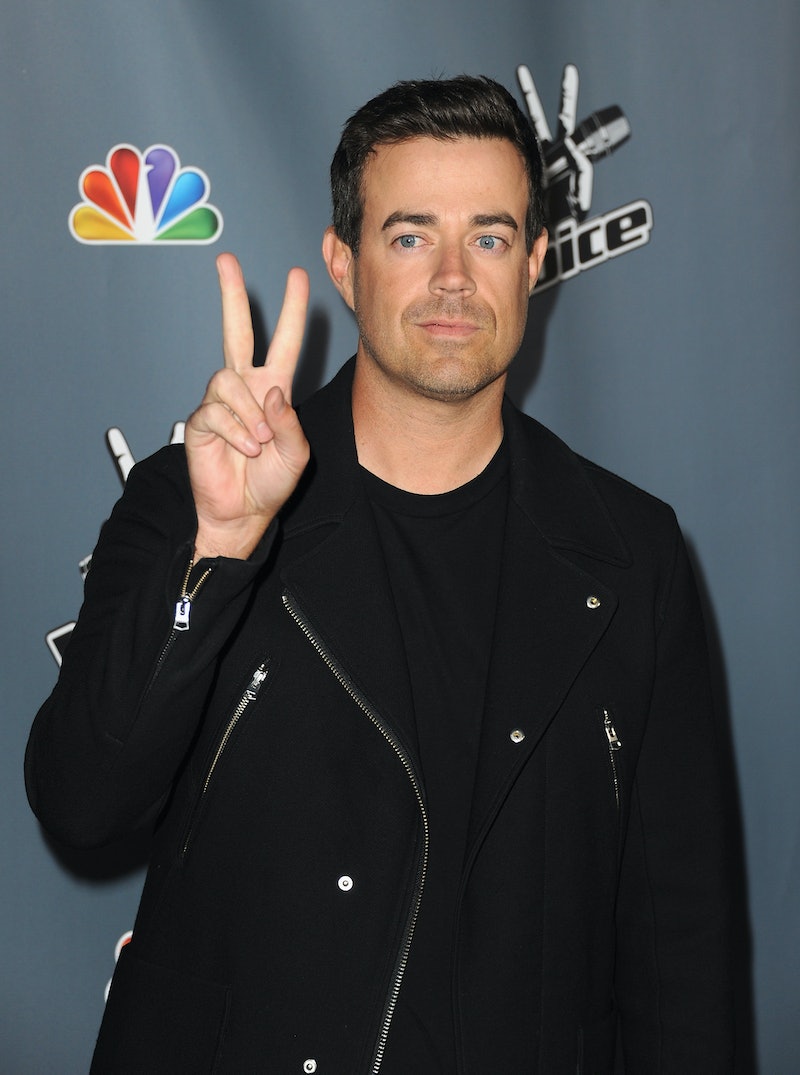 Oh the glory days of TRL. It was that magical moment people talk about when MTV played more music videos and less subtitled teen parents, and when *NSYNC performed together for more than 45 minutes. It was truly a better time for everyone, especially Carson Daly. The former VJ hasn't found that same success since he left TRL in 2002, no matter how hard he works on The Voice. Daly announced earlier that he will join NBC's Today, but even that won't help him accomplish his ultimate goal — becoming Ryan Seacrest.

Here's what happened. Daly was the host of TRL in its aforementioned heyday, but quit in 2002 to host a late-late-night show on NBC, Last Call with Carson Daly. Is his name in the title now? Yes. Does anyone watch it? Not really. TRL became an instant hit, one of the biggest things in pop culture. He left to be on a show that has lasted for 11 years, sure, but at 1:35 a.m. Not exactly the same thing, and Daly isn't really a household name anymore. You know who is? Ryan Seacrest.

Daly joined TRL in 1998 and hosted for four years. Just as he was leaving, a new reality show was starting. It was called American Idol. Unlike his co-host Brian Dunkleman, Seacrest didn't quit. He's been the host of American Idol for all of its 12 seasons, and signed a deal last year extending his contract. Maybe Daly saw the success that American Idol brought Seacrest and thought, hmm, maybe leaving a cultural phenomenon in its prime wasn't the best decision. So what did he do? Became the host of a singing competition, just like Seacrest. Daly has been the host of The Voice since its premiere in 2011.

Until Today came along, that's really all Daly had going for him. He hosted The Voice, Last Call and New Year's Eve. Seacrest, however, has been so busy that you can find him on three of the four major broadcast networks. Besides hosting Idol on Fox and New Year's Rockin' Eve on ABC, Seacrest just became the host of NBC's new game show Million Second Quiz. He's also hosted KIIS FM's On Air With Ryan Seacrest and American Top 40 since 2004, and both have since become syndicated programs across the country. Daly tried to get in on the radio game too, he started hosting AMP Radio in 2012. It's broadcast in Southern California.

Maybe Today will help Daly finally be more like his elfin counterpart. Then again, Seacrest is an executive producer of Keeping Up With the Kardashians and a whole bunch of other E! reality shows. Unless Daly gets really cozy with the Honey Boo Boo clan, he's still got a long road ahead of him.

More like this
What Is Ariana Grande's Net Worth? When It Comes To Money, She Has No “Problem”
By Hugh McIntyre
Travis Barker Has Been Hospitalised In California With Reports Of Pancreatitis
By Sam Ramsden
How To Listen To The 'Love Island' 2022 Soundtrack
By Liv Facey and Sophie McEvoy
Travis Barker & Kourney Kardashian’s Updates About His Health Are Promising
By Stephanie Topacio Long
Get Even More From Bustle — Sign Up For The Newsletter