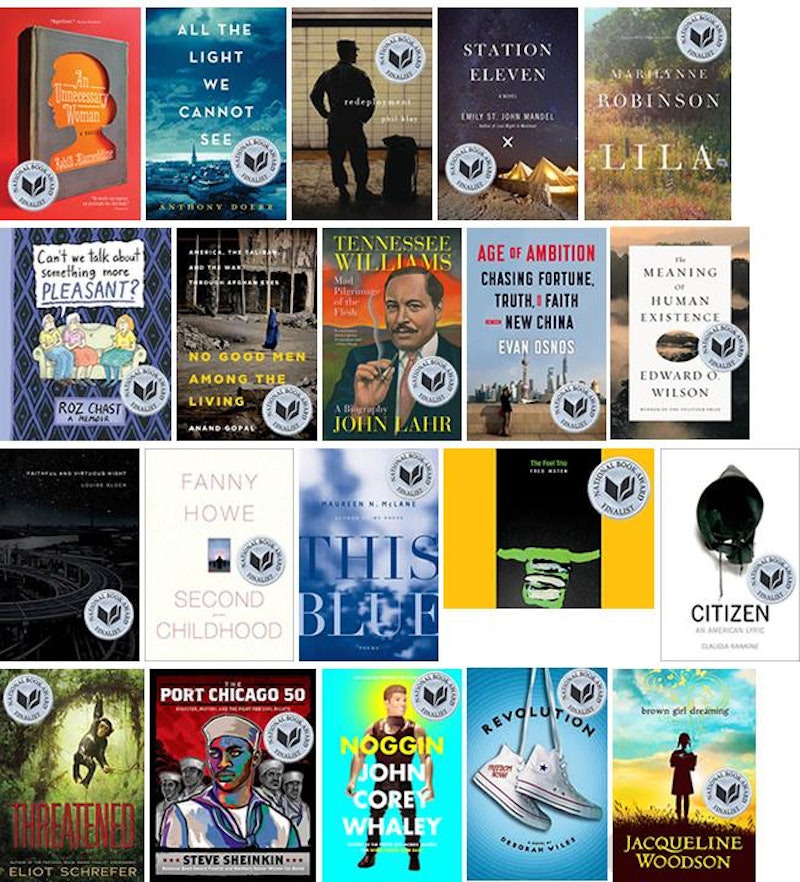 Literary nerds, as host Daniel Handler called us all, had our Oscar's Wednesday with the 2014 National Book Awards. Four winners were chosen in the categories of young people's literature, poetry, nonfiction, and fiction from the National Book Award finalists, five in each category. Host and young adult author Handler, more famously known as Lemony Snicket, cracked jokes throughout the 65th year of the award ceremony to an audience of the nominees, members of the publishing industry, and 13 Pulitzer Prize winners.

"Michael Jordan thanks the NBA Awards for everything they've done for the game," joked Handler as he welcomed his fellow literary nerds to the ceremony.

The four winners were chosen by panels of judges who were flown to New York City to have lunch. During that lunch, they were told to not get up until they had unanimously determined a winner. Luckily, everyone made their decision in time. This year's winners included two men and two women, and a whole bunch of prestige.

Copper Sun author Sharon M. Draper announced the nominees and winner of the National Book Award for Young People's Literature, and she's no slouch herself. Draper is a (count them) five-time winner of the Coretta Scott King Award, given to outstanding African American authors and illustrators. The winner for young people's literature is:

!!!!! So excited about this one. Woodson is so deserving, and so is her mesmerizing story, told entirely in verse. In her acceptance speech, Woodson charmed, noting her love for her category: "I love how much love there is in the world of young adult and children's literature." Woodson has been nominated three times before, but this is her first win.

Poet and critic Robert Polito handed out the National Book Award for Poetry, and I can't say the winner was all that big of a surprise. You know her, you love her, she's a Pulitzer Prize winner, and she's been nominated for the NBA several times before.

"It takes time to cry," said Glück in her acceptance speech. "I'm not going to do that."

OK, so it's been made abundantly clear who we were favoring for this award here in the Bustle offices, but that doesn't take away from the immense talent and absolute beauty in the rest of the nominees. Unfortunately, our choice Roz Chast, this year's Kirkus Prize winner, wasn't chosen (tears), but fortunately, there was really no losing choice in the category to begin with. Handed out by Pulitzer Prize recipient Alan Taylor, the winner of the 2014 National Book Award for Nonfiction is:

Osnos' book is a heavy-hitting, completely vibrant look into China like we likely haven't seen before. In his acceptance speech he even gave a shout-out to Chast, thanking her for her beautiful work.

The fiction finalists for the National Book Award were about war, more war, the collapse of civilization and other bright and cheerful things. "That fiction committee," joked Handler, "They really know how to party."

But as Pulitzer Prize winning author and foreign correspondent Geraldine Brooks said when she was announcing the nominees and winners, "Even in the Iraq book, there's a few laughs." She's talking of course about Redeployment—which leads us to the winner:

Klay, who's also a member of the National Book Foundation's 5 under 35, gave a moving acceptance speech about how he himself felt as a Marine returning from the war in Iraq.

The night began with two other awards, as First Book co-founder Kyle Zimmer took home the Literarian Award for her work in bolstering childhood literacy, particularly in lower-class and impoverished households. Neil Gaiman handed out the NBA's version of a lifetime achievement award to Ursula Le Guin, the 2014 Medal for Distinguished Contribution to American Letters.

More like this
10 Equally Romantic & Heartbreaking Books From British & Irish Authors
By Shahed Ezaydi
Delia Cai’s Small-Town Romance Goes Beyond The Tropes
By Samantha Leach
Jessica Simpson On The Time She Was Pursued By A Backstreet Boy & An *NSYNC Member
By The Editors
Netflix Shut Down 'Bridgerton' S3 Rumours About A “Very Dark” Storyline
By Bustle
Get Even More From Bustle — Sign Up For The Newsletter
From hair trends to relationship advice, our daily newsletter has everything you need to sound like a person who’s on TikTok, even if you aren’t.