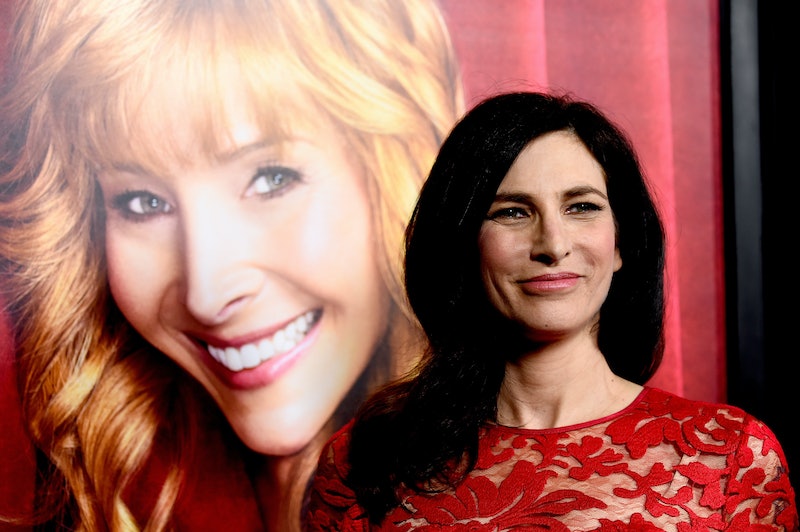 HBO's one-season wonder The Comeback was always a meta show, telling the story of a washed up former sitcom star desperate to revive her career... played by former Friends star Lisa Kudrow. But now, nine years later, The Comeback is staging its own comeback, taking "meta" to a whole new level.

In both its iterations, the viciously dark comedy has had a large cast of eclectic character including Valerie Cherish, her fabulous hairdresser Mickey Deane, and her archenemy, Paulie G. (the head writer on her sitcom, Room & Bored). But there's one character that viewers have rarely ever seen, despite having appeared in every single episode: Jane Benson, the producer of Valerie's reality show.

In Season 1, Jane was tasked with following Valerie around wherever she goes, shooting a reality series called The Comeback that was supposed to air in tandem with Room & Bored. She was in charge of shepherding the film crew as well as eliciting reactions from her often-flustered star. In Season 2, Valerie seeks Jane out to produce a new iteration of The Comeback after she gets cast in an HBO show called Seeing Red. (The fictitious show-within-a-show is a comedy written by Paulie G. about a television writer clashing with his aging leading lady, Mallory Church.)

Since she was so rarely seen in Season 1, you may not have realized that Jane is actually played by Laura Silverman, older sister to famous comedian Sarah Silverman. In Season 2's second episode, Silverman finally got her time in the spotlight, when Valerie paid her a visit to personally implore Jane to helm her newest reality TV endeavor. I was fortunate enough to get to chat with Silverman about The Comeback's comeback, how taxing it is to always be lurking just off-camera, and the future of the show.

BUSTLE: What was it like returning to a role so many years later?

LAURA SILVERMAN: It was great. It's not very often that you get to get to relive your first big job nine years later when you've had a lot more experience and you're more confident and more relaxed about things. It was really a special experience.

Was picking up the character of Jane again like slipping on an old shoe? Or did you sort of have to remind yourself of who this character was?

She had evolved in the minds of the writers, so we talked about what that evolution was. But it wasn't terribly difficult, I don't think. I just kind of listened to them and tried to do what they wanted me to do.

Were you in on the conversation at all about bringing the show back, or did that surprise you as much as the fans?

Oh god, no. But I was thrilled. When I heard that it was coming back, I had no idea if I would be involved in it or not. I couldn't imagine how they would use me. But then again, it's kind of hard to imagine The Comeback without Jane. So I just had faith that they would figure out a great way to do it, and they did. And I'm very happy that they did!

It has to seem real, or the whole thing falls apart.

You had more screen time during the second episode of this season than you probably did during the entire first season combined. And we learned a lot about Jane, like that she's an Oscar-winning Jewish lesbian documentarian. Were you happy to finally give fans a chance to put a human face to Jane's name? Or did it feel a little weird for the character to be so exposed since she'd spent so much of Season 1 behind the scenes?

It was great! It's difficult to always be off-camera. It's hard to keep your energy up. We're actors, so being on camera, you know that the camera's rolling and your face is on it, and you get that shot of adrenaline. When I'm there, I'm always there, so Lisa's always acting with me. I'm next to the camera and she's talking to me and I'm always acting with her. It can be very draining. It's difficult to keep my energy going. It's amazing what it physiologically does to you just being on camera. So yeah, it was really fun. I was really nervous, it was a long friggin' night. We did it all in one take, about four times through.

That's interesting, it sort of ties into another question I had, which is: You've done a lot of voice work, like for Bob's Burgers [in which she voices twin Andy Pesto alongside her sister Sarah as Ollie Pesto]. Your role on The Comeback, to the viewer, is sort of a weird hybrid of live acting and voice work, since you're physically on set but you're rarely seen, and often your voice is the only indication of your presence. So I was going to ask, does playing a character that exists primarily off-camera still hold the same challenges as live acting? It sounds like, in a lot of ways, it's more challenging, is what you're saying.

Yeah, it is, because when you're doing voiceover you're there by yourself. The other actor's not even there — you just drop your bit in and it takes five minutes. It's a pretty cushy situation. But this... I mean, yeah, I'm there all the time. I'm literally never not there, unless it's like the ceiling-cam or something. One thing that I'm very grateful for is that Lisa really does let me know that she relies on me and that she's affected by what I give back to her. That's really really nice to hear, and is pretty much what keeps me going.

And also because, there's always going to be a moment where they catch a peek of me, so I have to be in it all the time because it has to seem real, or the whole thing falls apart. I can't just be, like, looking at my phone or whatever.

You mentioned that a lot has changed for Jane, she's evolved a lot between seasons. She's basically exiled herself from the entertainment industry at the start. So what would you say convinces her to come back? Is it really just the money, or is there something else involved in that decision?

At first, I think it has nothing to do with the money. If you look at where Jane is when they first see her, she's a rescuer. She rescues large animals. And Valerie needs rescuing, and she can't stop herself. Because she does care about her, and she sees that she's walking into a very dangerous situation... again. So I don't think it's the money at all.

It's interesting that you say she's rescuing Valerie, because in the first season, a lot of the time, it kind of felt like Jane's questions were designed to humiliate Valerie in some way. So, does she just have a totally different mind set for The Comeback, Part 2?

It's yet to be seen what trajectory that will take. The way I always saw it was, back then, Jane was an employee. She was doing a job, and she didn't know this person. She was just starting out, and her job was to get a certain thing. And, you know, she was gonna get it. And I think along the way, she really started to care about Valerie and felt bad about it. But she's the type of person that, she's gonna do her job. It wasn't really like she was setting out to humiliate her, she just knew what the job was. She has people to answer to.

And she has HBO to answer to this time around.

Yeah, true. But I think she feels like she has a lot more clout now.

Right. She's got an Oscar.

It's just a whole different situation. She might make the decision to come back because she's having a weak moment, but when it becomes a reality and she finds herself in this daily grind again, it's yet to be seen what she finds herself needing to do to make it work.

Oh, yeah. I love a lot of reality TV. I'm obsessed with Big Brother, I'll admit it. I always watch American Idol, I still cling to that. I can't really watch too many Housewives, I can only commit to one, so I watch Beverly Hills. And then I'll watch different cities at different times. But there's only so much of it I can take, because I just feel like they're yelling at me.

Do you think there will be a Season 3 of The Comeback?

If it did come back, where do you imagine Jane would be another nine years down the road?

That would be a twist.

You're gonna have to pitch that.

And he's a house-husband. That's what I picture, anyway. Maybe she's bi.

I don't think The Comeback is trying to be anything other than just entertaining.

You work with so many famously funny people, I'm just curious which of your cast members is the funniest in real life.

Oh my god. I guess Lisa, but all of them. They're all hilarious. Probably me. I do have a tendency to laugh at my own jokes, so I might be missing a lot of other people's.

I like the idea of quiet Jane being the class clown.

I am a class clown, for sure.

You know, The Comeback is often unrelentingly vicious towards its female protagonist, towards Valerie. Do you think there's a way in which The Comeback is a feminist show?

I mean, sure. In a sort of exaggerated manner, it portrays what might happen to somebody if they were to put themselves in that position. You have to look at the fact that, we're not talking about Meryl Streep. She wants something, and someone like Valerie is going to have to put up with a lot of shit. There's definitely sexism there, like a woman aging and such, and how she's treated.

I don't think The Comeback is trying to be anything other than just entertaining. I think it's really smart. I think a lot of people actually really don't get it as much as I wish they did. I don't think it's trying to make any big statements about anything. Or I could be wrong. If women who are feminists like the show, then it's feminist. It's about how it resonates with people.

More like this
Elizabeth Debicki On Her Approach To The Most Debated Scene From 'The Crown'
By Grace Wehniainen
The First Trailer For 'That '90s Show' Includes So Many Nods To The Original Series
By Jack Irvin, Alyssa Lapid and Grace Wehniainen
Matt Smith Proves He's Daddy Daemon In This Viral 'House Of The Dragon' Video
By Marina Watts
Kate Winslet Spoke Candidly About Filming A TV Series With Her Daughter
By Sabah Hussain and Sam Ramsden
Get Even More From Bustle — Sign Up For The Newsletter