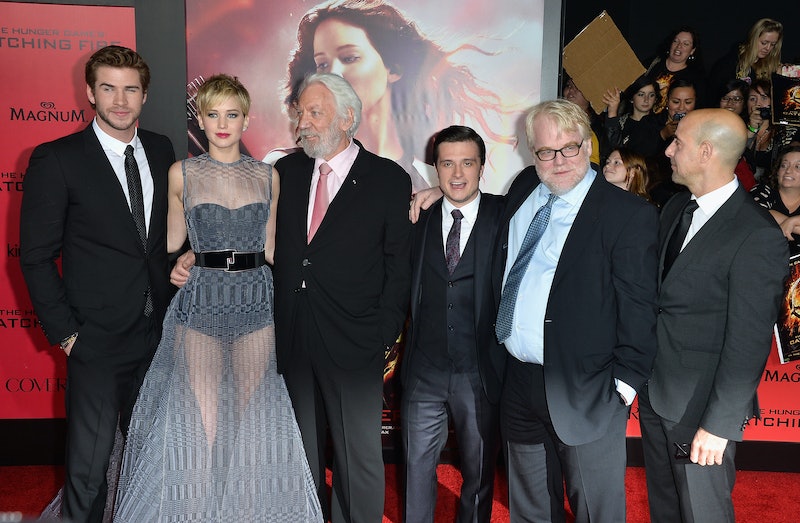 While Shooting The Hunger Games: Mockingjay Part 1, star Philip Seymour Hoffman tragically passed away due to a heroin overdose. The cast and crew of the film were completely shocked by the events. Once the franchise went back into production, many of Hoffman's scenes, including those in Mockingjay Part 1 and Part 2 had to be altered. According to the film's director Francis Lawrence, at the time of Hoffman's death, "There were two substantial scenes that he had left, scenes with dialogue. All the other scenes he had were appearances in scenes where he had no dialogue." However, the Hunger Games creators had absolutely no intentions of digitally re-creating Hoffman on screen.

Since Hoffman passed before both Mockingjay films were completed, the director and film crew decided to divvy up the lines of Plutarch Heavensbee between other characters rather than replacing actors. Lawrence noted, ""We decided to rewrite the scenes and give his dialogue to other [actors]...There's a scene in Mockingjay Part 1 that Elizabeth Banks took over for, and there's a scene in Mockingjay Part 2 that Woody Harrelson took over for."

According to The Hollywood Reporter , Hoffman had just one scene left to film for Mockingjay Part 2 before his death in February. Though it will be sad to never see his part in the film in whole, the entire franchise will still stand as a testament to Hoffman's work. An exectuive at Lionsgate noted, "His performances in both [remaining] movies will be up to the best of his craft. We feel it will be a good tribute to him."

More like this
Everything To Know About 'The Hunger Games' Prequel Movie
By Grace Wehniainen and Radhika Menon
Anne Hathaway’s ‘The Devil Wears Prada’ Anniversary Post Turned Political
By Brad Witter
All The Sneaky Lindsay Lohan Movie Easter Eggs In Her New Ad, Explained
By Stephanie Topacio Long
Sadly, You Can’t Stream 'Minions: The Rise Of Gru'... Yet
By Morgan Leigh Davies
Get Even More From Bustle — Sign Up For The Newsletter