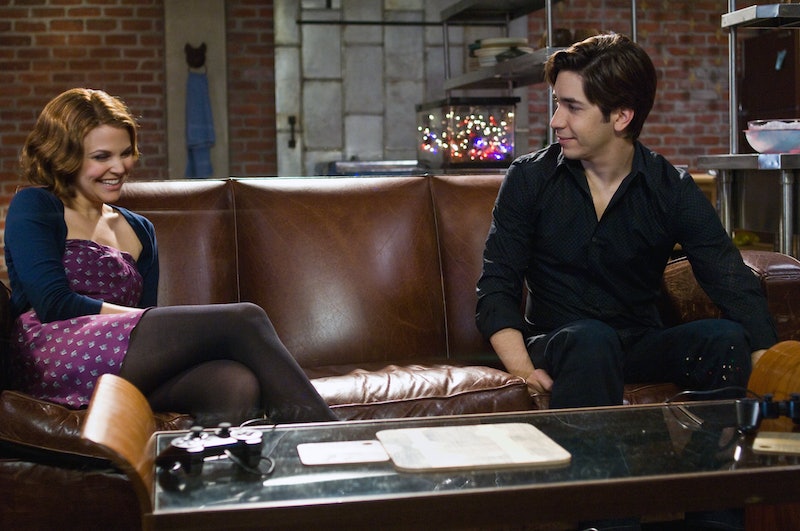 For nearly two years, I was in an on-again, off-again relationship with Jeremy. Or at least, if you'd asked me at the time, I would have told you that we were in an "on-again, off-again" relationship, because that made it sound a lot cooler than what it actually was: a half-assed relationship with a guy who just didn't like me that much, one where I got dumped...a lot. Over the course of two years, Jeremy dumped me three times, often in the most humiliating ways possible (while on the way to a good friend's birthday party; in the car outside a diner; while earnestly quoting the Dave Matthews Band to me). During our final breakup, which stretched out over several months, Jeremy cheated on me with a stranger while on vacation in France; after we fought about that, he asked me to move in with him, then took a sudden trip to Ohio, where he dumped me again over the phone.

At the time, I thought that Jeremy genuinely loved me, but was wildly tormented — that was why he couldn't get it together to be a decent boyfriend for more than six months at a stretch, and why I was always so eager to take him back, right? In retrospect, of course, that's a load of rich creamy butter — Jeremy was never that into me, and if I'm honest, I was never that into him. What I was actually into were the thrills of an "on-again, off-again" relationship — the drama of the constant fighting and breakups, the emotional highs and fresh honeymoon period I was able to enjoy every time we got back together, and the feeling of self-righteousness I got from being the victim (which made me feel justified in constantly complaining about him to literally everyone I knew). It was basically a hobby, not a relationship, and not even a very good hobby at that.

And yet, as embarrassed as I feel looking back on the whole thing (did I genuinely think I was in love with someone who used a quote from "The Space Between" to point out a flaw in our relationship?), I learned lessons from my relationship with Jeremy that got me out of a life-long rut of dating guys who weren't that into me, and made me realize that I was hooked on dating drama. Are you one of the 60 percent of people who have been in an on-again, off-again relationship? Then let's journey, you and I, down the backroads of my memories, and explore the lessons we can learn from these exhausting, all-consuming relationships.

I'm not one to blame TV for anything — but I will shamefully admit that a lifetime of learning about dating from primetime television kind of warped my mind. On TV, everyone is on-again, off-again — Ross and Rachel, Chuck and Blair, Carrie and Big, Ted and Robin, Schmidt and Cece — and it's generally implied that this is the case because the couple's passion is too great for this world, or that they need to grow up and get over their fears of commitment before they can truly commit to each other. It's never implied that they're on-again, off-again because they're just not really right for each other, but too lonely/lazy to look for someone new.

Whenever Jeremy and I were in one of our low points, I felt like the heroine of my own personal TV drama — look at me, not giving up on my one true love, refusing to take the easy way out, blah blah blah. I was basically Felicity, I was! I thought that the fact that we couldn't stay away from each other was romantic —but, in reality, the fact that we couldn't stay with each other was the extremely unromantic part that I should have been paying attention to. Real romance isn't all dramatic gestures and sweeps week moments — it's being thoughtful and kind to someone every day. You know, the kind of stuff that would make for super boring TV.

Lesson: The real reason that everyone on TV constantly breaks up and makes up is that it's a plot device — not because it's the actual way that true love functions.

2. IF ALL YOUR FRIENDS HATE YOUR S.O., you should probably pay attention to that

My friends all thought Jeremy was an ass. And after our first breakup and reconciliation, they refused to even have dinner with him or invite him to bar outings. They thought that he and I were lonely people with nothing in common, who treated each other badly and fought constantly because we were a poor match; I thought we treated each other badly and fought constantly because our passion was so real and so deep, no one looking at us from the outside could understand. Guess who ended up being right?

There's a hint of that "us against the world" feeling even in the healthiest of relationships — when you're with someone who genuinely reduces you to big eyes and baby talk, it's tough to avoid occasionally feeling like you guys must be onto something that everyone else in the universe is missing. But when "the world" starts meaning "my roommate, my best friend, and most of my coworkers at the Container Store, who all agree that this relationship is a farce," it's time to reassess what's actually going on. That "we're misunderstood!" vibe has fueled shitty, mismatched relationships from Romeo and Juliet to Courtney Stodden and that old guy from Lost — and if you're feeling it in your relationship, it's time to take stock. Are your friends constantly harping on your partner because they're "jealous" or "don't understand what you have"? Or is it because they're able to look at the relationship in a big-picture way that you can't and can see that you're actually unhappy?

Lesson: Your real friends aren't "haters" — they really care about you, and odds are that their critiques of your on-again, off-again relationship have merit.

I can see now that, from day one, Jeremy was trying to show me that he was just not that into me: He played all your standard texting games (the "oh, I was just away from my phone for the past seven hours," the "that text was supposed to go to someone else," etc); he canceled long-held plans at the last second and tried to only hang out on the spur-of-the-moment; he talked openly about how attractive other women were.

When I got him to curb these behaviors for extended periods of time, I felt triumphant: he liked me so much, he changed for me! He was willing to give up the pleasures of playing phone-based mind games, just for the sake of our relationship! But the joy was always short-lived, because...well, he hadn't actually changed. He just enjoyed my company enough that he was willing to not comment on how shapely another woman's ass was in front of me for a few weeks at a time.

Though everyone fronts a little and plays some games at the very beginning of a relationship, when they drop that stuff, they're not changing — they're just letting their true self out from under the suffocating mask of Casual Dating Behavior. But when you're months into a relationship, and someone is still acting like a game-playing d-bag who doesn't care about your feelings (even if they profess to care about your feelings), listen to what their actions are telling you. This isn't 10 Things I Hate About You. This is your actual life, which you are wasting getting drawn into some high school–level text drama.

4. IF YOU'RE BREAKING UP ALL THE TIME, YOU'RE BORED

The way that Jeremy would constantly break up with me, then go wild trying to win me back always, felt glamorous to me — I thought it meant we were passionate about each other. But what it really meant was that we were bored.

That's the thing that's hard to realize about a very dramatic relationship until it's over — you guys probably liked the idea of each other more than you actually liked each other. And your constant fights were your way of expressing frustration about this person not living up to the fantasy expectations you'd created about them in your mind, not an expression about how you were willing to "fight for your love" (barf).

Lesson: Constant breakups aren't about love and passion; they're about not having any compelling reason to stay together.

5. THERE ARE WORSE THINGS THAN BEING ALONE

So why the hell did Jeremy and I waste two perfectly good years of our lives with each other? Well, we were physically attracted to each other, made each other laugh, and enjoyed the same cable dramas. But mostly, we were lonely, and we didn't like ourselves enough to believe that there was someone out there who'd actually like us for who we were. We thought that whatever we were doing to each other was better than being alone.

We were very, very wrong about that. When I finally woke up from my final post-breakup funk with Jeremy, I realized that the wrong relationship is a lot worse than being alone — at least when I was alone and felt lonely, it was because I was actually alone. I had felt lonely all the time while I was dating Jeremy because I couldn't trust him or confide in him, and it felt much worse than any kind of singleton loneliness I ever felt.

A crappy relationship that you're keeping on life support due to mutual loneliness does more than just steal all your energy and isolate you from your friends — it keeps you from dating someone else who might actually get you. Staying in an on-again, off-again relationship is usually about being afraid — afraid that there's no one out there who'll really like you and want to be in a mutually respectful relationship, or afraid that you won't be able to take the pain of a breakup with someone you genuinely love. But you don't need to be afraid of that. No matter who you are, or what your life has been like, there's more out there for you than just resigning yourself to a totally toxic relationship. You can do better. I promise. Lesson: Don't waste your life on a toxic relationship just because it's familiar and comfortable. If you want to feel comfortable, buy a nice couch.