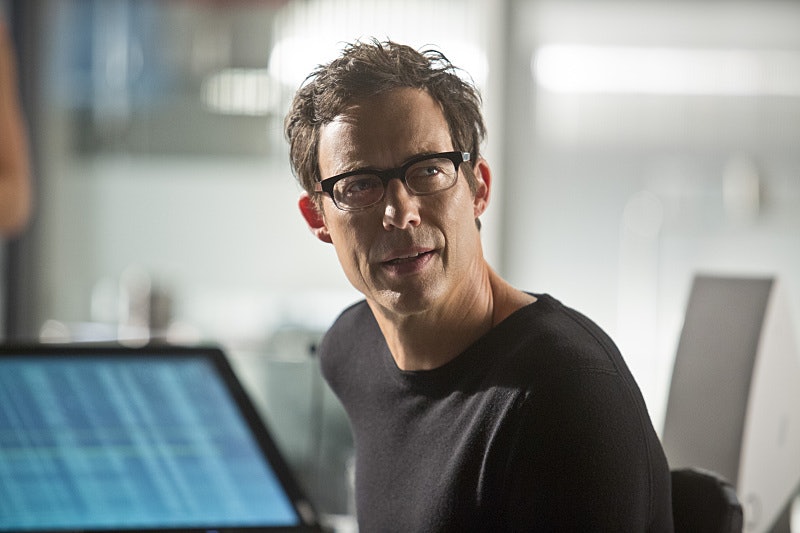 As if he didn't want to make us pull our hair out enough already, The Flash 's Harrison Wells has now introduced Gideon, yet another mystery character. Gideon is the secret machine in Harrison's lair that he is using to catalogue Barry's every move. Is it possible that Tess Morgan might be alive through this machine? Although "Gideon" seems to be an awfully bizarre name for a woman, the machine responds in a woman's voice, and stores all of the rather disturbing information that Harrison is giving it into a database, all of which just seems a little too coincidental since only last week he revealed the death of Tess, his wife, nearly 14 years ago.

And regardless of the machine's identity, how exactly is it capable of seeing the future? It seemed a likely theory that Harrison was from the future because he had all this foreknowledge about what happens to The Flash, but Gideon just managed to shift all of its information along with the changed time stream, which might indicate that Harrison isn't from the future at all —maybe he just has developed technology that has somehow circumvented the time stream and allowed him to see events before they happen.

In the meantime, we also have a lot more insight to Harrison's intentions with Barry. It seems more likely now than ever that Harrison could be a villain, as evidenced by the fact that he referred to Barry as his "subject" and the rather ominous comment he made to Gideon: "Unfortunately his penchant for heroics still persists." Unfortunately? Anyone who was on the side of "good" in this case would logically be pleased by his devotion to helping people. I have a feeling that Harrison's personal JARVIS is going to have a few tricks up its sleeve before this episode is over, so we'll have to wait and see.